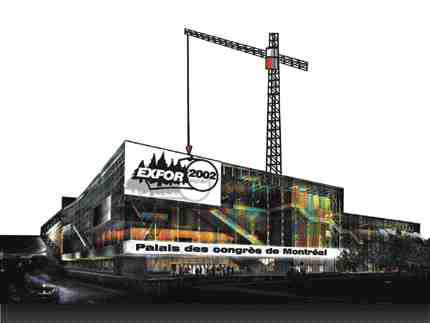 PAPTAC’s executive director Rob Wood promises that there will be no disruptions because of ongoing construction (the second phase of the expansion will be complete for EXFOR 2003). Obviously, delegates aren’t attending PaperWeek to sightsee. Wood expects a full gamut of topics to be covered in the 35+ technical sessions scheduled between Tuesday, January 29 and Thursday, January 31, 2002. PaperWeek itself starts on Monday, January 28. A broad range of topics will be covered and will feature mill operating experiences, case studies and the results of industry research.

Other events include an open session on professional development as well as the by-invitation-only Mill Managers’ Forum. As per recent years, the Forest Products Association of Canada (FPAC, formerly CPPA) and the Pulp and Paper Products Council will hold a number of Open Forums in the Bonaventure Hilton and Sheraton Centre hotels. Wood holds out the hope that the bigger Palais will perhaps allow the sessions currently scheduled off-site to be held in the Palais in the future.

Wood reiterated the value of mills sending their people to PaperWeek. “It is worth their while. Delegates always bring something back to their mills and this has value.” One idea brought back and implemented more than pays the way of a delegate or two.

Wood also mentioned one special event that has been planned for Monday evening: a tour of The Montreal Gazette’s new pressroom, located in west end Montreal. The tour will start about 9:00 p.m. and numbers will be limited. More details will be available from PAPTAC staff at the Palais.

PaperWeek is competing with two other large pulp and paper events in 2002, one scheduled in the US and one in Sweden. Why, then, attend PaperWeek? Wood stressed the strong, comprehensive technical program that PAPTAC always prepares. “We have the strongest technical program of all.”

Wayne Novak is general manager of ActivExpo, the show manager. He notes that when complete for EXFOR 2003, the Palais will be twice its previous size. For EXFOR 2002, the amount of exhibit space has increased by 30%, providing exhibitors an extra 50 000 ft2 of exhibit space. With two entrances, there will be better access to the building and because the Palais expanded westward, it is now closer to the downtown core by a block. The new entrance — 1001 de Bleury — is across the street from the Intercontinental Hotel. Access by subway (Metro) has also been improved.

For the convenience and comfort of those using the shuttle bus service, buses will now disembark/embark delegates indoors at the Palais.

Although the amount of exhibit space has doubled, the number of companies exhibiting at EXFOR will remain about the same, approximately 470 (a sell-out). Many companies have taken advantage of the larger Palais to increase the size of their booths. “They have taken advantage of the opportunity to expand,” Novak added. “Companies will be able to really showcase their goods in a bigger and better fashion. They will be able to bring in pieces of equipment they couldn’t before because of space limitations.”

Again in 2002, EXFOR will have over 100 new exhibitors. The exhibit layout has been completely redesigned with a better mix of large and small exhibitors. There are a number of large island booths, which have been placed throughout the floor. The previous maximum booth size was 1200 ft2, now it’s 3000 ft2. Novak noted that the large booths are situated more towards the centre of the room, not at the entrances, to stimulate a good flow. A color scheme will differentiate the old from the new: teal for the old, plum for the new.

A large centre aisle, 30 ft wide, will give a “boulevard-type” atmosphere and improve visibility compared with the old, “stovepipe aisle” design. A couple of restaurants have also been integrated into the main exhibit area.

And, there is still room to grow. In 2003, another 50 000 ft2 of exhibit area will be ready. “Exhibitors and customers are looking forward to it,” Novak added. “Many companies are taking advantage of the increased space to redesign their booths.” For EXFOR 2002, every exhibitor has had to be relocated. Thus, each exhibitor has a new “address”. In this regard, Novak said that ActivExpo is very appreciative of the patience and cooperation received during the process. As all exhibitors are in a new location, it will be more important than ever to refer to the Pocket Showguide, published by Pulp & Paper Canada. It will be available on site.