In an industry often criticized as being too conservative and afraid of innovation, the newly formed Papier Masson Lte is taking a bold, but well calculated, step into the future with the decision to... 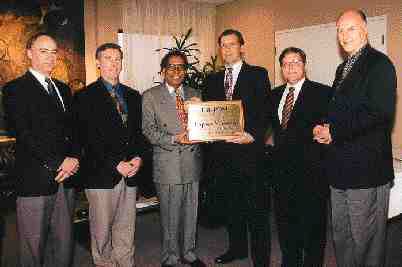 In an industry often criticized as being too conservative and afraid of innovation, the newly formed Papier Masson Lte is taking a bold, but well calculated, step into the future with the decision to purchase a new $150-million (CDN) single line, two-stage TMP plant featuring what will be the largest refiners in the world, the Sunds Defibrator CD 82, which will be powered by 43 000 hp (32.5 MW) motors. The new TMP plant will also make Papier Masson the first single pulping line, one paper machine mill in the world.

The Masson, QC, newsprint mill produces about 210 00 tonnes per year (t/y) of newsprint. Until December 1998, the mill was part of James Maclaren Industries, which in turn was part of the Noranda Forest Products (now known as Nexfor) chain. As its only newsprint producer, the Masson mill did not fit into Noranda’s long-term plans and had been up for sale. With a fairly modern machine, the mill attracted a few suitors but Noranda felt the offers it received were not fair value so, for a while, the mill was off the market. However, a group of five investors got together with Noranda and were able to come to terms. Thus, Papier Masson Limite was formed. (See sidebar.)

Currently, the mill uses four furnishes: UHYS and groundwood made on-site as well as purchased kraft and recycled. James Maclaren Industries is a partner in the Dsencrage CMD mill in Cap-de-la-Madeleine, QC, which supplied the recycled pulp. Although not a partner, Papier Masson will continue to receive recycled pulp from Dsencrage CMD. Kraft is only used for a few orders, particularly when lightweight newsprint, 45 g/m2, is being produced. In 1998, only 2% of the total pulp used was kraft.

It was well known that the mill would have to do something about its pulping processes to remain viable. Maintaining the status quo was not feasible, noted vice-president, operations, Andr Legault. Although the new TMP plant will mean job cuts, it ensures the long-term future of the mill.

The groundwood and UHYS mills along with their associated departments will be shut. For most of its customers — 95% if the current mix remains — Papier Masson will make a 100%-TMP newsprint sheet. For those who require recycled content, the mill plans to make an 80:20 TMP:recycled sheet. Kraft pulp will no longer be used.

The TMP plant will include three CD 82 refiners: one primary, one secondary and one rejects. Three parallel, low-consistency JC-04 conical refiners will provide tertiary refining. Capacity of the new plant will be 740 t/d. The main line refiners have the same connected horsepower, but won’t draw the same power. The mill designed it this way for spares compatibility.

Having been with James Maclaren since 1984 and mill manager since 1992, Legault knows how important it was for the mill to move to TMP to ensure its future. But how and why did Papier Masson decide to go to a single line system? “We had looked at TMP seriously for over two years,” he noted. “We looked at a number of installations. For the capacity we wanted, a one-line system was feasible. We’ll be the first, but someone has to be.”

The company believes it will be the trendsetter for single line mills. “You used to see mills with three pulping lines,” Legault added. “Then, mills went to two. Now, we’re taking the step to one.”

Economics does play a factor in the decision; still, Legault stressed, the system has to work and, “We believe it will. We will have the capacity and the quality.’

Being a one-machine mill helps. Machine efficiency is over 90% and much emphasis is placed on planning and preventative maintenance. The company will roll over this philosophy into the TMP plant. “We’re comfortable with it,” Legault said.

As noted, the groundwood, including wood handling/debarking and UHYS plants will be shut. The mill will move to 100% purchased chips. A new, completely automated chip handling facility will be built, including a new chip dumper able to accommodate B trains.

Papier Masson currently buys about 92 000 t/y of chips. It will more than double that to about 220 000 t/y. Legault said the chips will come from sawmills that are located north and east of the mill. He also said that supply is not a problem. The mill now has a long-term agreement with the Noranda-owned Norboard sawmills to supply chips. Other suppliers are also being sourced now.

The mill plans to use a 100% softwood furnish. Once start-up is optimized it will be able to introduce other species such as poplar at a “controlled rate”. This depends on how things have “stabilized”, according to Legault. It will be a minimum of six to 12 months after start-up.

Once the chips reach the mill, a radial stacker will divide the chips into two piles: high- and low-density. The former will be black spruce from the Norboard sawmills. The latter will include more “southern’ black spruce, white spruce and balsam fir.

Legault emphasized that species segregation is a big part of the process. The mill plans a 50:50 high-density:low-density chip mix in the furnish. Metering screws under each pile will discharge chips onto a common conveyor, carrying them to the top of the screening building. If new species are introduced, they will have to be metered into the furnish. Economic will dictate this move as poplar and jackpine are cheaper than spruce.

After screening, “correctional” washing, and draining, the chips will be conveyed to the atmospheric presteaming (APS) bin of the TMP plant. A plug screw feeder will then carry the chips to the impregnator, which will use water to even out moisture variations. There will be no other chemical treatment. Sunds will also supply this equipment as well as three Pulp Quality Monitors (PQM).

After preheating, the chips will be fed into the CD 82 primary refiner. After primary refining, the pulp will pass through a pressure cyclone, be discharged into a thermo mixer and then into a screw feeder to the secondary refiner. A heat recovery unit is being installed to recover steam generated in the refining process. It will be used in the dryer section of the paper machine.

From here, the pulp will pass through a second cyclone and be discharged into a latency chest. The pulp will then undergo tertiary refining in the JC-04s before passing into a low-consistency latency chest. In a bid to keep costs down, this chest will be a converted high-density UHYS storage tank.

With the quality of the fibre and the screening system, Legault said pulp cleaners wouldn’t be needed.

The thickened stock will fall to a standpipe and then pumped by MC pump to high-density storage. The bleaching chemical — sodium hydrosulphite — will be added in the MC pump. From the bleaching tube, the pulp will pass to one of two high-density storage tanks where touch-up bleaching will be done. Papier Masson will use one of
the existing high-density groundwood storage tanks and construct a new one. Storage time is expected to be 14 hours. The pulp will then be pumped to the stock prep area of the paper machine.

The new TMP plant will feature Sunds’ Thermopulp technology, designed to save energy. All stages of the high-consistency refining process are pressurized for efficient high-pressure steam recovery. Legault noted that plate pattern and tertiary refining would also be optimized to save energy. Reduced energy consumption is part of the total TMP package, he added. If savings are fully realized, Legault said he expects savings of about 400 KWh/t compared to conventional main line refining of 2400 KWh/t.

A new distributed control system (dcs) will be installed. It will cover the process from wood handling to high-density storage. The existing dcs for the paper machine and finishing will remain.

Although the paper machine is designed for 1220 m/min, pulp constraints restrict it to 1160 m/min. “With the existing pulp, we can’t run at high speeds and maintain efficiency,” Legault explained.

The overall objective of the project is to increase production to 225 000 t/y and that means running at 1220 m/min. This will necessitate some changes to the machine as well. The secondary fan pump is a bottleneck now and that will need changing. Work is also needed on the save-all system; white water and fines recovery. The mill intends to improve the cleanliness around the wet end. New cleaning showers will be installed and the mist that comes off the showers will be captured. The dry end gauging system will be replaced and a new CD caliper control system will be installed.

Finally, Papier Masson will convert the Bel Run (first dryer section with six dryer cans that has one common felt) into two separate uniruns, each with its own felt.

Legault does not foresee any changes to the winder. Over the last five years, the mill has changed the drives, slitting system and changed the orientation of the sheet from a vertical to horizontal run.

Papier Masson’s goal is to improve strength and printability properties of its newsprint. Legault said Masson’s sheet is not as strong as its competitors. Its tear is good but its TEA needs improvement. Bonding will also be better with the TMP furnish.

In terms of printing properties, Masson’s opacity is low compared to competitors but the TMP will improve this. “We will be able to produce one of the top sheets in North America,” Legault declared.

Although lower basis weight newsprint was in vogue a few years ago and many felt it would be an ongoing trend, Legault said that as publishers use more color, they are rethinking their position. Therefore, he sees standard newsprint being here for the long-term and this will be Papier Masson’s focus.

Over the next few months, the operators chosen for the new TMP plant will have the chance to see other TMP plants. For example, Abitibi-Consolidated in Alma, QC, and Iroquois Falls, ON, each has new Sunds’ TMP plants, although not with CD 82 refiners. Legault also hopes a visit to Alberta Newsprint (ANC) can be arranged. Although the equipment is not the same, ANC is a one-machine mill. The focus of the visit would be to study operating strategy.

Coming so soon after taking over the mill, this is a big decision for Papier Masson. It is, as Legault noted, a calculated risk, but one that’s been thought through exhaustively. “Because we’re a one machine mill, the concept of having all one’s eggs in one basket is known to us.” However, unlike the egg farmer, Papiers Masson doesn’t intent to trip on its way to the market.