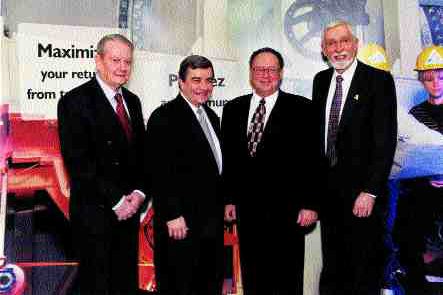 Research and development into system closure in Canada got a huge boost in February, as Technology Partnerships Canada (TPC) announced a three-year pledge to Paprican’s closed cycle technology researc…

Research and development into system closure in Canada got a huge boost in February, as Technology Partnerships Canada (TPC) announced a three-year pledge to Paprican’s closed cycle technology research.

The $9 million infusion will be spread out over three years, $3 million per year, and will support research to reduce pollution at its source by changing the manufacturing process in pulp and paper mills.

Dr. Gilbert Normand, Secretary of State, Science Research and Development, Joseph Wright, president and ceo, Paprican, Pierre Monahan, vice-chairman, Paprican Board of Directors and president and ceo of Alliance Forest Products, and member of parliament Clifford Lincoln announced Phase II of a TPC program that began at Paprican in 1996.

“The $9 million investment project prepares us for the 21st century by improving the quality of pulp and paper,” Normand said. “The project will reduce pollution and waste in the pulp and paper industry…. Encouraging progress has already been made.”

“The project is important to all Canadians,” said Normand, “because it increases productivity, the durability of the industry and produces cleaner air and water.”

The Technology Partnerships Canada program looks for innovation, public and private participation, and this investment is a good fit. This high profile and relevant project is also important to Paprican, involving 176 jobs, benefiting economic growth and will, in Normand’s opinion, “make Paprican the leader in this technology.”

Phase I developed technologies to prevent mills from generating effluent, several of which are already successfully implemented, said Monahan. Nine new technologies are in the final stages for new mills, and the technologies will also be applicable to retrofit older mills, Monahan explained.

The Paprican and TPC objectives are to develop technologies to increase system closure in the Canadian industry, and to improve its economic performance. To these ends, Paprican will develop technologies to control the process, decrease losses in production, separate contaminants, recover chemical products, manage energy and protect against corrosion.

Simulating industry conditions won’t be difficult, as Paprican’s paper machine resembles a standard industry machine, with the exception of its width. The machine is one of the fastest in the world, producing paper at 2500 m/min.

“We can do all the trials necessary for an industry machine,” said Nicole Poirier, group leader in the institute’s papermaking program, who gave an overview of the process.

Paprican has already invested $7 million into the project. Most of that went to modifications such as renovating the bleach plant, recovering filtrates, separation technology, etc.

Poirier reported that 35 technologies were developed in Phase I: nine were discontinued, eight were commercialized, 13 are in pilot trials and five are ready for Phase II. Each project has at least two industry partners.

Examples were provided of accomplishments from Phase I, and include improved tools for control simulation, increased temperature peroxide bleaching, and new chemical products for separation.

Poirier explained that Phase II would continue the promising technologies from the first phase, with more effort in areas such as coated and fine papers, bleaching and process control.

In an increasingly globally competitive market, environmental concerns have become a discriminating factor. Since Canadian mills have the same environmental demands as those in Europe, newer technologies are needed to maintain market access abroad and adhere to the high environmental standards.

Accommodating this next generation of pulp and paper technology for effluent treatment will mean that the older Canadian mills will need to make small changes throughout the mill to benefit. To be able to reuse the water in the system, separation and filtering of water will need close scrutiny. Water with high fibre content, low fibre content, and cooling water will all have to be processed separately.

Additional costs will also be incurred, as mills will now have to collect water that once would have been expelled as effluent. Extra tanks, pumps, savealls will be needed as well as finer filters, and new process engineering. However the long-term benefits, from a production point of view, are reductions in water, energy and landfill.

“We are trying with system closure to increase quality, decrease cost, and increase the bottom line,” said Wright. “This project is a good example of how we should work together.”