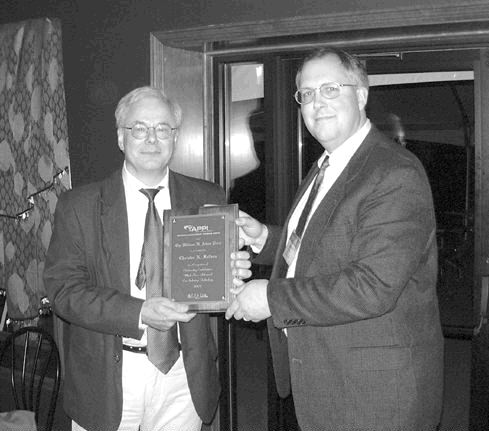 Jerome F. Tatar will retire as chairman of MeadWestvaco Corp. John A. Luke, Jr., currently president and CEO, will assume the role of chairman in December.Boise Cascade Corp. announced that Gene Foste…

Jerome F. Tatar will retire as chairman of MeadWestvaco Corp. John A. Luke, Jr., currently president and CEO, will assume the role of chairman in December.

David Hilton retired as vice president of corporate accounts at Weavexx, after 39 years in the paper machine clothing industry.

Universal Corporation’s Allen B. King, president and COO, will succeed Henry H. Harrell as chairman and CEO, who will retire in December.

Temple-Inland announced the elections of Grant F. Adamson as assistant general counsel; Leslie K. O’Neal as vice president, benefits, while Paul M. Anderson was re-elected to the company’s board.

Douglas C. Perks was elected as Eclipse’s chairman of the board. He will succeed A. Campbell Perks who served as chairman from 1970 to 2002.

SOR, Inc. has hired Bill Dickinson as VP of sales and marketing.

International Paper’s Carol Tutundgy will retire as VP of Investor Relations. She will be replaced by Darial Sneed.

FiberMark Inc. has appointed its CEO, Alex Kwader, as chairman of the board. He is replacing K. Peter Norrie who will continue to serve as director. FiberMark president Duncan Middleton was named to the board of directors.

Niclas Stenberg, Christer Fellers and Sren stlund, were awarded the 2002 Van den Akker Prize for Advances in Paper Physics by the TAPPI Paper Physics Committee for their paper, “Measuring stress-strain properties of paperboard in the thickness direction”. Fellers was also awarded the William H. Aiken Prize and the Ekman Award 2002. Marco Lucisano was given the Best Presentation Award 2002 for his presentation, “An experimental investigation of flashing in water-saturated paper webs with application to impulse technology”.