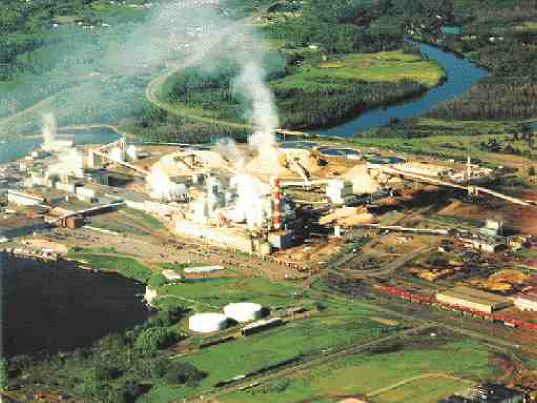 Bowater Canada is one of the leaders in eliminating NPE-based products from its processes. Shown is Bowater's Thunder Bay

A number of Canadian pulp and paper companies and their chemical suppliers have taken early action to phase out their use of products containing nonyphenol ethoxylates (NPEs), in advance of either reg…

A number of Canadian pulp and paper companies and their chemical suppliers have taken early action to phase out their use of products containing nonyphenol ethoxylates (NPEs), in advance of either regulatory requirements or a comprehensive environmental assessment of their effects in Canada. The story behind this ‘precautionary approach’ says much about how sensitive the pulp and paper and chemical industries have become to the Canadian public’s environmental concerns.

Nonyphenol ethoxylates (NPEs) belong to the alkylphenol ethoxylate family of non-ionic surfactants (chemicals that reduce surface tension) and are used in a wide range of industrial processes including textile manufacturing, metal degreasing, commercial and institutional cleaning, and pulp and paper processing. An estimated 7000 tonnes (t) per year of NPEs are used in Canada each year.

Public concern over NPEs dates back to the early 1970s, when they began to be phased out of household soaps and detergents due to their toxicity, their slow and incomplete biodegradability, and their resulting bioaccumulation in aquatic wildlife. More recently, NPEs and their breakdown products have come under renewed scrutiny for their endocrine disrupting properties.

This latter concern has attracted much attention from environmental groups, such as the World Wildlife Fund Canada (WWF Canada), which has made the phase-out of NPEs one of its top priorities. As Julia Langer, Director of WWF Canada’s Wildlife Toxicology Program explained, “We would like to see the use of NPEs phased out in Canada and are interested in working with industrial and commercial users to realize that goal.”

NPEs are also attracting more government attention. Environment Canada and Health Canada are currently conducting a rigorous environmental and human health assessment of NPEs to determine if they should be classified as toxic under the Canadian Environmental Protection Act. If they are, the federal government would then initiate regulatory or voluntary restrictions on their use.

Companies using NPEs may also feel some public pressure as information on their use and discharge becomes more widely available under the National Pollutants Release Inventory (NPRI). Reporting requirements kick in in 1999, and data will be made publicly available in 2000.

As early as 1996, pulp and paper companies such as Nexfor, Atlantic Packaging, and Bowater Pulp and Paper Canada, among others, led the way in efforts to replace their NPE-based surfactants with alternative products. Quite apart from the environmental risk posed by NPEs, the action of these companies can be explained by a convergence of three key factors.

First, a series of environmental issues such as the release of chlorinated substances including dioxins garnered public attention. Knowing that their sector is one of the most scrutinized in the country, there is sensitivity to public concerns, even if there is no direct regulatory threat in sight.

Second, in terms of their own bottom line, the cost of substituting these products was small and involved little or no interruption in production. This meant little resistance from either operational managers or shareholders.

Finally, and most importantly, companies were able to act quickly because alternatives were available for most types of products. Linear alcohol ethoxylates are the most common substitute for NPEs. Some companies worked closely with suppliers to ensure that the alternative products were equally as effective as those containing NPEs, while others simply sent a memo to their suppliers announcing that they would no longer use NPE-based products.

In the case of Nexfor (formerly Noranda Forests), the decision to adopt a pro-active approach in 1997 simply made sense given the circumstances. As John Roberts, Vice-President, Environment, explained, “We based our decision to phase out NPEs on our understanding of their potential environmental effect, the low cost of replacing NPEs, and the fact that our mill managers felt that they could replace NPEs with minimal disruption to our regular operations. In doing so, we avoided potentially costly regulation and a future scientific debate over the environmental consequences of NPEs.

In less than two years, Nexfor eliminated the use of all but one of its NPE-based products. Nexfor continues to work with its suppliers to find an alternative that is non-photoactive for pulp that is used in phtographic papers.

For Atlantic Packaging, which produces new and recycled paper products, it only took some gentle prodding from the Ontario Ministry of the Environment (MOE) and WWF Canada to reconsider its use of NPEs. As Tony Biernacki, Assistant to the General Manager, with responsibility for environmental affairs, recalled, “We received a letter from our MOE district office in the Spring of 1997, bringing the issue of NPEs to our attention, with a press release from WWF Canada attached, which outlined the environmental risks associated with NPEs. We followed up with our own research, and it became clear to us that this was a serious issue that required immediate actions.” Although Atlantic was not using many NPE products at the time, and found little or no trace amounts of NPEs in its effluent and sludge, it was concerned enough with any amount of NPEs in its biosolids that are applied to agricultural land. The company felt it was necessary and worth the effort. As Atlantic Packaging already used a natural surfactant in its deinking operations, it took only a couple of months to replace the remaining products.

In early 1997, Bowater Inc. became increasingly aware of reports that NPEs and their breakdown products may have the potential for endocrine disruption. As a result, an NPE elimination plan was put into place. “Through Bowater’s commitment to addressing these issues, we are dealing effectively with an important emerging environmental issue and minimizing the potentially costly impact of future regulatory requirements. We have been successful in eliminating the use of certain products that contain NPEs and have been diligently working with all suppliers to eliminate this potential source,” Catherine Cobden, Director of Environment for Bowater’s Canadian operations, said.

The process of phasing out NPEs was not quite so straightforward for the suppliers of the NPE-based products. When important clients began serving notice that they needed non-NPE products, it had an immediate ripple effect. The major suppliers that did not yet have alternatives had to move quickly to reformulate and register their products. Since then, some suppliers have chosen to adopt a no-NPEs policy themselves, reformulating any and all products containing NPEs. Others simply introduced a new line of NPE-free surfactants.

There were those, however, that had already begun to reformulate their products in advance of any notice from their clients. For Dubois Paper Technologies, a medium-sized supplier, this put the company in a good position to react quickly and capitalize on its market advantage. Dubois began reformulating its NPE-based products in 1997, due to the adoption of a no-NPE policy by its parent company DiverseyLever. “About a quarter of our product line had to be reformulated. Some suppliers were caught out initially, but we were already along that road when we started hearing from our clients that they needed NPE-free surfactants,” Harold Laser, Dubois’ Technical Manager explained. The new product lines which were reformulated and are now NPE-free include SureSafe, FeltBrite, and DIV-O-KLEEN.

Buckman Laboratories, the Canadian branch of US-based Buckman Laboratories International, is a major pulp and paper chemical supplier. It completed its phase out of all APEs, including NPE, in 1998. As Michael Anstey, Technical Manager of Canadian operations explained, “We started to feel some pressure when NPE was put on Environment Canada’s 2nd Priority Substances List, which required that users of NPE had to report on the amount of NPE that they
released. While we do not necessarily agree that the amount of NPEs discharged by Canadian pulp and paper mills presents a significant environmental hazard based on current knowledge of thresholds, the additional scrutiny contributed to our decision to act in advance of pressure from our clients.” Buckman Laboratories completed its introduction of APE free products in 1998. Some of the NPE-free products include Busperse dispersants, cleaners and boilout additives, Bubreak defoamers, Busan microbiocides, Bufloc polymers, and Buzyme enzymatic biodispersants.

World Wildlife Canada welcomed the early response of some pulp and paper and chemical companies to concerns over NPEs’ environmental effects.

The question remains, why haven’t all pulp and paper companies and suppliers followed suite? It may be lack of information — companies may not be aware that a number of suppliers have already formulated alternatives that are readily available on the market. Or there may be concerns about the effectiveness of the linear alcohol ethoxylate-based alternatives. While more difficult to formulate these products in a way that retains equivalent product performance, they closely match NPEs in terms of their surfactant properties.

Or it may be that some companies are skeptical of the weight of ecological and health evidence concerning the effect of NPEs and unwilling to practice the precautionary approach. The Environment Canada/Health Canada assessment of NPEs, which was expected to be completed by the end of 1999, may tip the scale by providing information on NPEs in the Canadian context.

But even in the absence of this assessment, corporate attitudes may change when NPE releases have to be reported to the NPRI next year.

Companies like Nexfor, Atlantic Packaging, Bowater Canada, DiverseyLever and Buckman have learned that by acting early, they can make changes on their own terms, and avoid regulation and bad publicity further down the road. P&PC

Nicola Crawhall is an independent environmental consultant based in Toronto, and a former policy adviser to the Ontario Ministry of the Environment.