Serving as Paprican's chairman of the Board of Directors (representing Paprican's member companies) is Pierre Monahan, president and CEO of Alliance Forest Products Inc. He believes his main role duri... 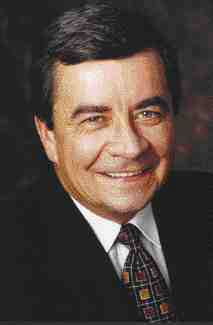 Pierre Monahan: The industry must be prepared to make a commitment.

Serving as Paprican’s chairman of the Board of Directors (representing Paprican’s member companies) is Pierre Monahan, president and CEO of Alliance Forest Products Inc. He believes his main role during his two-year mandate will be to rally the Member Companies into finding a new focus at the Institute, “a new way of doing things”.

Like any shareholder in a company, the member companies study all expenses and R&D doesn’t come in for any special treatment. The industry went through some tough times in the past decade and cost cutting is a big issue right now for every Canadian pulp and paper company. Monahan noted that most companies look at the medium and long-term returns on their investments. Paprican is an R&D institute and, as Monahan added, “In most cases companies tend to cut those expenses first, because of their medium and long-term returns, so right now we have a challenge. We must convince the membership of the medium and long-term value of Paprican. We have to prove to them that they will get a good return on their investment. My role will be to help Paprican staff convince the membership to this effect.” Increasing the number of member companies is also a priority. “We have to come up with a new way of looking at our markets. That’s why we’re opening Paprican to outsiders,” Monahan added, citing that US companies can now join as Associate Members.

Monahan said one of the objectives is to make sure the Institute has a solid revenue base, “so we can sustain the fundamental research programs that we currently have.”

That base is in Canada and to ensure a solid base, “We have to come up with the proper research programs, those that will meet customers’ needs, and find the right way to keep them informed. Opening communications channels will be a key element in our success.”

With a solid base established, the focus will then be to look at other ways to increase revenue. This is the reason for testing American waters and so far it looks “… very promising. We have a very specific program of what we want to make available to the US companies. We’ve developed an assessment system for collecting specific revenues for specific services rendered. In a nutshell, we have to be creative in terms of getting new sources of revenue to enhance the long-term future of Paprican. We believe that strictly doing it the traditional way, the way we’ve done it for the past 75 years, won’t work in the future. Globalization is a reality for any organization.”

The mergers taking place in the industry have had a profound effect on Paprican. “Members are assessed on a per tonne basis. Consequently, because of the consolidation that is taking place, you end up with mega-producers that find their Paprican invoice heavy. They are looking to reduce it. Generally speaking, there is only one way of meeting that objective and that is to open doors to foreign companies, American as well as others. In other words, we must enlarge our customer base in order to reduce the per unit cost for everyone, and this is only feasible by becoming a global institute.

“We are convinced we have a good product: that’s why we believe we will be successful with that mission.”

Monahan is realistic about the time this type of change can take, realising his term is only two years. “I will do my best to do most of it. I think it will take us more than two years for the turnaround. It will probably take three to five years to do the job. The fundamental change will take place within the next two years. I must say that so far the reaction has been positive. We will be successful; but to change the whole philosophy/mentality will take somewhere between three to five years, I’m sure.”

A mid-sized company such as Alliance cannot afford a major R&D department/program. One way to realize the benefits is to participate in major R&D programs through Paprican. Alliance does have a three-member R&D team that keeps a constant link with Paprican. In Alliance’s case, two major projects were started four years ago, one dealing with soft nip technology, the other with CTMP fibre separation. “Without Paprican, it would have been much more difficult and expensive,” Monahan said. He added that in the future, to be cost efficient, the Canadian paper industry will have to share those expensive research programs through an institute like Paprican. The future is promising, Monahan repeated, but it’s a matter of proper marketing and communications, both with current and potential users. “In the past, if we had a weakness, it was probably on the marketing side. We have to modernize ourselves. R&D organizations must look at their membership as a market, like a customer-oriented service. We’re going to have to work hard on the marketing side to improve the communications network between the members and the Institute.”

As an example, for a company such as Alliance, the best way to make R&D efficient is to enter a partnership with an institute like Paprican.

As Alliance prepares to start up a new paper machine at Donnacona, QC, the work on fibre separation is continuing. That technology developed with Paprican was used to help make Alliance’s Eminence paper grades at Dolbeau, QC. Donnacona’s product will also be helped by the results of the same R&D program. “We will keep working with them on any program that has something to do with groundwood paper,” Monahan stated.

My message to the Canadian industry is: please be honest with yourself. Ask yourself if R&D is essential to the long-term viability of our industry.

PIERRE MONAHAN, Chairman of the Board of Directors, PAPRICAN

Another big issue for groundwood paper producers is color reversion. Work at Paprican is progressing well in making the technology efficient and cost effective. Another great opportunity is energy conservation.

The role of industry

To ensure Paprican’s long-term viability, the Canadian pulp and paper industry has an obligation. Monahan explained, “The industry must ask itself if it believes that R&D is necessary for the long-term future viability of the industry. If the answer is yes, then the industry has to be prepared to make a commitment. One can choose to be a free rider and let the other guys carry the weight, pay the bills, but eventually everyone will get hurt.

“My message to the Canadian industry is: please be honest with yourself. Ask yourself if R&D is essential to the long-term viability of our industry. If the answer is yes, be prepared to carry your fair share of the weight, be prepared to be an active participant. Otherwise, we will eventually have to pay the price by ending up with a non-competitive industry.

“I hope that people are willing to answer that question honestly. Let’s hope they get onboard and pay their fair share.”

Paprican has obligations too. Monahan said that Paprican has the proper R&D programs in place. “The big challenge for us is to market Paprican properly. To get Paprican known across Canada, better than we have in the past, and also across the border.”

Enlarging the customer base is a must. “By concentrating on improving marketing we will secure the future of the Institute. Paprican is ranked among the best research institutes in the world. We know we have a very good product, it’s a question of marketing it properly.”