Northern Pulp is awaiting a final government decision on its new effluent treatment plan amid an approaching deadline and pressure from community stakeholders. Here's the latest on the contentious saga 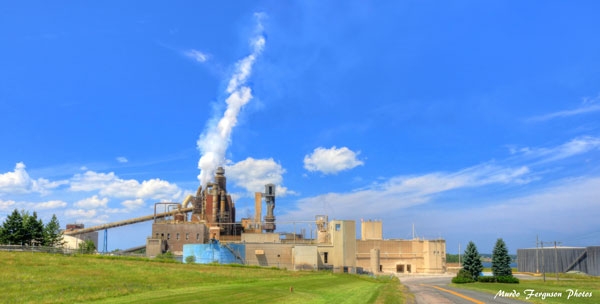 June 21, 2019 – It’s perhaps the most difficult time in history for industrial chemical plants to be “friends” with their neighbours and to communicate the progress that has been made in effluent treatment.

In some cases, even though plans for much-improved effluent treatment are in the works, if there’s been a history of contamination – and there’s no flexibility in the timeline to get new treatment in place – a plant is at risk of shutting down.

That’s strongly not the outcome hoped for by Paper Excellence Canada (PEC) about its kraft mill, Northern Pulp Nova Scotia Corporation in Abercrombie, Nova Scotia. In May 2015, Northern Pulp was given until January 30, 2020 by the provincial government to stop using the Boat Harbour effluent treatment facility that it’s historically used – the building borders the reserve of the Pictou Landing First Nations, and is owned by the province. Northern Pulp has proposed a new on-site facility, with treated effluent being piped for outlet into deep ocean waters in Caribou Harbour in the Northumberland Strait, the same water body where effluent has flowed since the Boat Harbour facility was commissioned in 1967.

Passage of the legislation shutting down the existing facility (The Boat Harbour Act) was spurred by a pipe rupture incident in June 2014 that resulted in 47 million litres of untreated effluent being released into a nearby wetland instead of reaching the Boat Harbour facility. Northern Pulp pled guilty of the associated charge and was fined $225,000.

A community divided
Knowing all this, you might agree that it’s a gamble for the current provincial government to entertain a plan for a new effluent treatment facility. It’s also a compromise of sorts; representatives of all three major political parties have vowed to the people of Pictou County that they would close the Boat Harbour treatment facility. However, hundreds of jobs are at stake. If the treatment facility closes, Northern Pulp closes and over 300 direct jobs will be lost, as well as many more jobs in the forestry industry associated with mill function (Northern Pulp, for example, purchases almost all the wood chips produced by all of the province’s sawmills). Indeed, in early April this year, Unifor representatives had a meeting with Nova Scotia Premier Stephen McNeil about the importance of the mill jobs.

Northern Pulp’s plans for a new onsite effluent treatment facility were submitted to the province in January. There is strong opposition to this plan from environmental groups such as the Friends of the Northumberland Strait or FONS, (more on that later), as well as fishers and others. Indeed, a standoff with fishers during fall 2018, one that prevented Northern Pulp from doing ocean survey work to complete its plan, lasted two months – and followed on the heels of protests like one where 1,000 people in July 2018 held signs sporting slogans such as “Pipe Equals Death.” On social media, #NoPipe posts spiked when actor Ellen Page tweeted support for The Mill: Fifty Years of Pulp and Protest, a book condemning Northern Pulp’s environmental efforts, by journalist Joan Baxter.

At the end of March, the province told Northern Pulp that it would need changes made to the plan and more information added; the exact changes, called “terms of reference,” were provided to Northern Pulp on April 23. For example, the proposed pipeline route needs to be moved away from shoulder of Highway 106. New survey data must confirm viability of the marine portion of the pipeline. Much other data on, for example, pipeline leak-detection technology and complete characteristics of treated effluent, are also required. Kathy Cloutier, PEC’s director of corporate communications, says that all of it – whether additional data, clarifications or changes – is doable and that the team is working on collecting the answers.

You may be wondering at this point, why Northern Pulp took so long to submit its plan. That is, it might seem, especially from the many news stories out there, that Northern Pulp has been “sitting on its hands” from the point in time that the Boat Harbour Act became law in May 2015. Cloutier explains that at that point, Northern Pulp was already involved in seeking amendments to the mill’s existing industrial approval (IA) permit, a document that did not account for improvements that PEC had made to the mill since its purchase in 2011.

A court showdown was avoided, and the government amended the IA in spring 2016. “There was no point in addressing the Boat Harbour Act until we had the IA sorted out, as without the amendments, we would have had to shut the mill,” Cloutier explains. “As soon as we got the amendments, we began working with government on a plan to address [the] Boat Harbour treatment facility replacement and by September 2016, an RFP for preliminary engineering for a new treatment facility was given to a firm. We worked diligently with that firm, the government and others on our plan from that point on.” (For a full timeline of events, see below.)

You may also be wondering what the point is of working on changes to the submitted plan if the government won’t push back the shutdown of the Boat Harbour facility (again, legislated to occur by end of January 2020, only months from now). “Yes, no matter how fast we address the terms of reference this year, we need an extension of use of Boat Harbour,” says Cloutier. “If/when our plan is approved, we will need likely at least a year to construct the new treatment facility and the pipeline and receive the environmental approvals, and until then, we must use Boat Harbour to avoid interruption to operations.”

She explains that while some have suggested Northern Pulp could shut down the mill from January 31, 2020 to when construction and commissioning of the new treatment facility is completed, a shutdown is not something a pulp mill readily withstands. And even a “hot idle” (another suggestion) would require effluent treatment. Cloutier adds that at least three sawmills would shut down within three weeks if Northern Pulp closed, even temporarily.

“The government has said it would consider postponing the shutdown of Boat Harbour treatment facility if there is community support for that,” she notes. “We’re working to build that, reaching out to industry stakeholders, community leaders, the Pictou Landing First Nation and others, and striving to be transparent. We are hoping, after all this diligent and hard work, that the support will be there to keep the mill running.”

The proposed plan
In its proposed onsite effluent treatment facility, Northern Pulp intends to use an AnoxKaldnes BAS (biological activated sludge) process purchased from Veolia Water Technologies, the leader in this technology. The process combines conventional activated sludge treatment with “Moving Bed Biofilm Reactor” technology, which involves the use of specialized polyethylene to create a large surface for biofilm attachment.

Northern Pulp says the technology is the best of the two possible kraft mill effluent treatment options, the other being an aerate stabilization basin, which is what’s currently used at Boat Harbour. The new system is also expected to meet the impending updated federal pollution regulations for pulp and paper mills.

This is not acceptable to groups such as FONS. Indeed, the group formed to achieve two specific goals: to prevent any Northern Pulp effluent (treated or not) from entering the ocean, and to prevent any extension to the January shutdown of Boat Harbour. As these words on its website attest, trust among its members is low: “Reassurances from the company and the government have led to devastating results in the past. We don’t want that to happen again.”

“FONS is of the view that a closed-loop system remains a viable choice compared to the proposed [plan], from an economic and environmental perspective…[and] the only environmentally viable solution,” says Jill Graham-Scanlan, president of FONS. “Northern Pulp does not wish to make such an investment to modernize its operations and eliminate its effluent discharges. Northern Pulp wants to characterize the solution as a stark choice between Northern Pulp continuing to make its current profits and offloading the environmental problems to the Northumberland Strait, or closing the mill entirely. This is…an oversimplification of the market and the choices.”

Mike Wilson, environmental lead at Northern Pulp, explains that changing the mill from kraft process to one that uses a closed-loop effluent system is not feasible for several reasons. “Closed loop has been tried since the 1970s for kraft mills, but it has not been successful,” he says. “A mill making bleached chemical thermomechanical pulp (BCTMP) is closed-loop, but there are two insurmountable problems with that for this site. It would require a complete plant retrofit, which would take some time and is costly. In addition, BCTMP uses a huge amount of energy to break down the wood fibre and in Nova Scotia, power is not cheap. Our existing mill makes 90 per cent of its own energy because the kraft process produces lots of steam. So overall, financially, it’s difficult to make a case to switch from kraft.”

Leaving the kraft pulp market would also mean leaving a market with growing demand (tissue products) and a reliable customer base for one that is unreliable (paper, newsprint and magazine). This would not be a wise move for any pulp industry company, Wilson notes.

Looking at effluent characteristics, Wilson says there will be no free chlorine at ocean entry, and the pH is expected to be in the range of 7.0 to 8.5. The majority of the content carried in the effluent water (e.g. nitrogen, phosphorus, a water quality metric called chemical oxygen demand) will not be detectable in ocean water two metres out from the pipe opening. This is expected to meet the updated federal regulations.

Dr. Bruce Hatcher, chair in Marine Ecosystem Research at Nova Scotia’s Cape Breton University, says the treated discharge from the mill “will be the proverbial drop in the bucket, but it will be a continuous drip. There will be a plume immediately downstream of the diffuser, and undoubtedly there will be negative, including fatal, effects on organisms within that plume.”

He adds, “We cannot know exactly what they will be without building the diffuser and measuring it…With so many variables and uncertainties involved, and so much value in a healthy Northumberland Strait ecosystem and its fisheries, there is good justification to undertake a full panel scientific and social-economic study of the effects of a new, direct discharge on the ecosystem. But apparently business and political considerations do not permit that luxury.”

The people of the region, Hatcher says, must therefore decide on the basis of the best available evidence “whether they want to take the ecological risk to the productivity of the Strait in order to maintain the economic benefit of the Northern Pulp mill. Whatever the decision, it will be much more a matter of social, rather than scientific, considerations.”

Wilson and Cloutier want the community to know how hard the Northern Pulp team is fighting to keep the mill open for the benefit of the whole province. “Our owner has been investing in this mill to improve its environmental performance since its purchase and he’s devoted a huge amount of resources to addressing the regulatory requirements over the last four years,” says Cloutier. “We want Boat Harbour to return to its natural state and to keep the mill open. We’ll get there if we’re given the chance. We just need the time.”
_____

Treena Hein is an award-winning science and tech writer based in Ontario.

This article originally appeared in the Summer 2019 issue of Pulp & Paper Canada. Read the digital edition.
_____