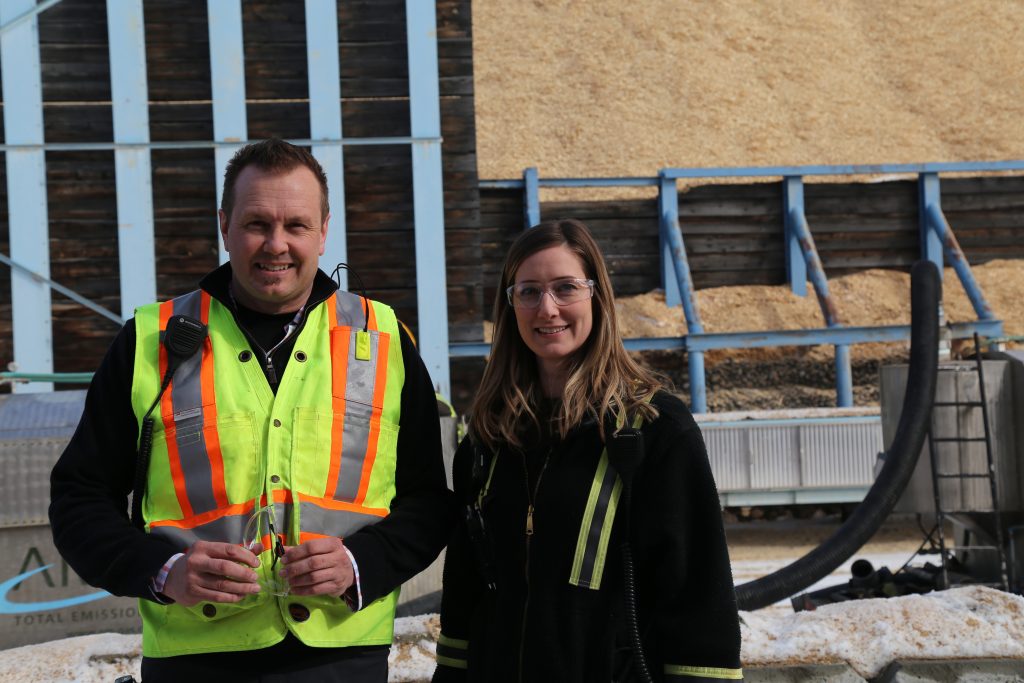 It’s been two years since a pulp mill in northern Alberta cut the ribbon on what is likely the largest anaerobic treatment facility of its kind in the world.

Now that the proverbial dust has settled, the real benefits of the facility are crystal clear: reduced environmental impact, higher pulp production and lower costs.

Millar Western’s bioenergy facility at its pulp mill in Whitecourt, Alta., is using anaerobic hybrid digesters (AHDs) to remove organic material from the mill’s wastewater stream and convert it to biogas that is then used to generate power. Steam from the process is captured and used in the pulp drying process.

At its current capacity, after two years of running successfully, the bioenergy plant can generate 10 per cent of the mill’s electricity requirements – a significant offset for a facility that is a major power consumer.

“The bioenergy project was an opportunity for Millar Western to utilize more of the energy that’s in the wood we harvest,” says Jeff Shipton, manager of corporate environmental services for Millar Western. “We’re able to take a waste stream from the mill and turn it into a green energy source that we can use to generate power and steam on our site and thereby reduce our utilization of power from the grid and natural gas consumption.”

As the first application of this technology in a pulp mill setting, the project presented a steep learning curve for the Millar Western team, Shipton says. The scale of the facility and the northern Alberta climate were unique challenges.

How was it done successfully? “We had a great group of people,” Shipton says. “Millar Western dedicated the right number of staff to this project and let us focus on start-up and optimization.

“We also had the benefit of a good business environment. There’s a lot of cutting-edge technology here. All the pulp and paper companies in the province are leading edge, committed to reinvesting in their businesses to improve their performance.”

Shipton notes that all levels of government were supportive, with the project receiving funds from Natural Resources Canada’s Investments in Forest Industry Transformation (IFIT) program and from the Alberta ecoTrust program. “This project was a good example of how governments and industry can come together to solve some of these greenhouse gas issues,” he says. 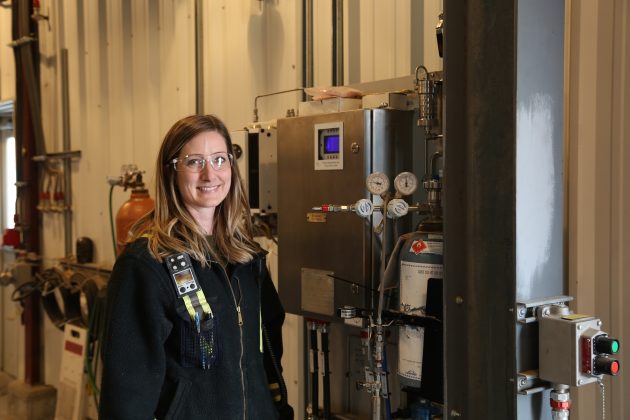 Millar Western’s Whitecourt operations – a two-hour drive northwest of the company’s Edmonton headquarters – include a sawmill, a pulp mill and woodlands operations. The company has a second sawmill in Fox Creek, Alta., and a remanufacturing facility in Acheson, just outside Edmonton. In all operations, Millar Western’s goal is to use the whole tree with zero waste.

Logs are supplied to the Whitecourt mill site from woodlands certified to the SFI sustainable forest management standard and the PEFC and FSC chain-of-custody standards.

The sawmill produces 330 million board feet of lumber annually, with all byproducts used to create valuable products: wood chips are used in the company’s adjacent pulp mill and at a neighbouring newsprint facility; wood shavings and other residuals are transferred to a regional medium-density fibreboard plant; and bark and other remaining wood waste is sent to a nearby biomass-fired power plant for conversion to green energy.

The pulp mill produces around 320,000 air-dried metric tonnes per year. Millar Western launched the bioenergy project to use even more potential from the wood chips expended in the pulp manufacturing process, and to further reduce the environmental impact from discharge of the pulp mill’s treated effluent into the Athabasca River.

The pulp manufacturing process uses about 10,000 litres of water a minute. The wastewater treatment process begins at the AHD tanks – three glass-lined, 10,000–cubic metre tanks running parallel to each other.

“Alberta has some of the most stringent regulations when it comes to industry effluent discharged back into the environment,” says Lindsay Boyce, environmental process specialist with Millar Western. Producing power from the effluent is a way to make use of material in the process that would otherwise go to waste, she says.

“We use water in our process and we need to treat that water before it’s discharged into the environment. So we take organics that are in the wastewater and we use bacteria to treat the organics to bring the wastewater up to a quality that exceeds our permit requirements and minimizes impacts on the receiving waters. In the process of doing that, these bacteria produce methane. We take the methane gas and produce energy that we can use in the mill,” Boyce says.

Millar Western cut the ribbon on the bioenergy project in late 2016. While the technology has been used in the oil and gas industry for some time, it was a novel application in a pulp mill, and is one of the world’s largest anaerobic digester treatment systems of its kind.

The pulp manufacturing process uses about 10,000 litres of water a minute. The wastewater treatment process begins at the AHD tanks – three glass-lined, 10,000-cubic metre tanks running parallel to each other. Bacteria of different varieties are present at various stages in the digesters.

“There are different types of bacteria that all work together. It’s a step-by-step process. You have one type of bug that takes the organics and converts it to a simpler form that the next bug can use. And the final step is the bugs that create the methane that we can burn in our engines,” Boyce explains.

The digesters create 600 to 900 cubic metres per hour of methane, which then flow to the eight-by-45-metre aerobic biological scrubbers. The scrubbers remove hydrogen sulphide from the gas and generate about 700 to 1,100 cubic metres of biogas each hour, which is sent to GE Jennbacher engines equipped with power turbines.

The entire process has the capacity to generate six megawatts of power, as well as three tonnes per hour of steam from Cain Industries heat recovery steam generators. The steam is used in the pulp drying process, which means less natural gas is burned at the dryers. 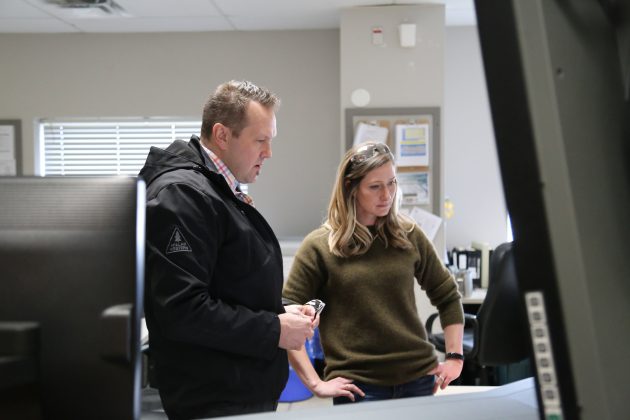 The bioenergy plant at its current capacity generates 10 per cent of the pulp mill’s electricity requirements and captures steam for use in the pulp drying process. Photo: Alberta Forest Products Association

Sending the wastewater to the anaerobic digester process ahead of the mill’s existing aerobic effluent treatment system has further reduced the “organic loading” in the mill’s final effluent, as well as the volume of water discharged back into the Athabasca River, Shipton says. It has also reduced the mill’s freshwater intake and chemical consumption, and cut greenhouse gas emissions.

On top of the environmental benefits, the increased capacity of the new treatment system has also eased a previous bottleneck at the mill. “We’ve been able to raise our pulp productivity by over 20,000 tonnes a year,” Shipton says.

More capacity also means more flexibility in the pulp grades produced, he says. “That has allowed us to adapt to changing market requirements. We’re able to shift our focus and create different grades for different end users.”

Now that the path has been forged to introduce AHD technology to the pulping process, the future is full of possibilities for Millar Western and other forest product companies.

“We’re utilizing as much of each tree that we harvest as we can. This is the first step in terms of biofuels and the bioeconomy. We’re taking the waste stream and converting it into biogas, into methane. The next step for the forest sector is to look at higher-valued commodities – turning it into liquid biofuels, biopharmaceuticals or other bioproducts,” Shipton says.

For now, the Millar Western team continues to study methods to optimize the process and resulting biogas and power generation.

“We generate a lot of data and making sense of it all is a lot of work. There’s a lot of sitting down and analyzing. It’s a work in progress, and we’re always looking for the next advancement,” Boyce says.

This article was previously published in Canadian Biomass, with files from the Alberta Forest Products Association.

Maria Church is the editor of Canadian Forest Industries and Canadian Biomass.