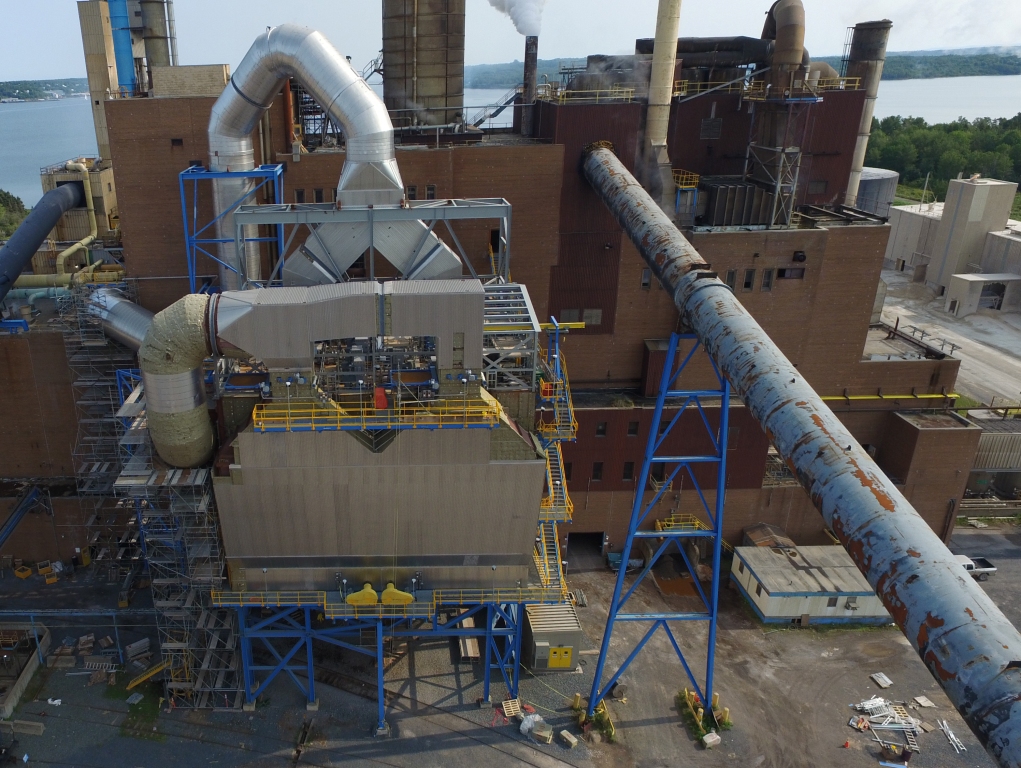 The new precipitator at Northern Pulp has substantially reduced emissions from the mill's recovery boiler.

Oct. 27, 2015 – Northern Pulp has completed a precipitator upgrade at the mill in Abercrombie, N.S., and substantially reduced emissions from its recovery boiler, but the mill has now received notice that its power boiler is not in compliance with its approval limits.

The provincial Department of Environment has issued a directive to Northern Pulp to complete an independent engineering review and evaluation for the entire power boiler system by Nov. 30.
The evaluation must include recommendations for any necessary operational modifications, and capital upgrades intended to bring power boiler emissions to within the company’s approval limit.
A statement from Northern Pulp explains that the results of testing done in the spring of 2015 on the power boiler were concerning and led the company to carry out proactive measures during the spring maintenance shutdown and throughout the summer. A power boiler emission limit Directive issued by Nova Scotia Environment (NSE) in June 2015 required Northern Pulp to provide a written report outlining planned actions. This report and inspection schedule has now been completed and submitted to NSE.
September testing revealed a power boiler level of 190 mg/Rm3 which exceeded the emission limit set at 150 mg/Rm3.
Upon receiving these latest results, Northern Pulp immediately contracted a boiler specialist to conduct a complete review of the entire power boiler system. The next series of recovery boiler and power boiler regulatory testing will be carried out in November.
“We are fully committed to finding out and solving the cause of higher than anticipated numbers stemming from the power boiler,” explains Bruce Chapman, general manager, Northern Pulp. “Building on the success of the precipitator, we’re striving to be an environmentally sustainable business in the province. An important next step for Northern Pulp is reducing power boiler emissions.”
Northern Pulp’s communications manager, Kathy Cloutier, explains that preliminary findings concerning the power boiler suggest that “too much excess combustion air is within the power boiler furnace, which is directly related to particulate.”
“With the removal of excess air, particulate should fall back in line with 150 mg/Rm3 limit,” she comments. Also, Cloutier says preliminary findings have also led to discussion and planned further study into Northern Pulp’s bark size. Bark that is too small may also leads to an increase in particulate matter.
September regulatory tests of the mill’s new $35-million electrostatic precipitator, conducted at full firing rate, show the recovery boiler precipitator particulate at 4 mg/Rm3. Testing carried out earlier in July by the company during the commissioning phase also revealed a result of 4 mg/Rm3. The industrial approval allows for a limit of 77 mg/Rm3.
“We now have two test results with a single digit number for the precipitator, significantly reducing our environmental impact,” states Chapman. “The recovery boiler precipitator test results show the incredible performance and value of this major capital project.”
In 2011, new owner Paper Excellence determined that Northern Pulp’s precipitator was reaching the end of its useful life and began the lengthy replacement process. Construction of the precipitator was completed in June 2015.
Regarding the power boiler, Northern Pulp has already taken some actions in an attempt to mitigate its emissions.
During or since the May 2015 shutdown, Northern Pulp has replaced the power boiler rear multi-cone dust collection system, replaced the venturi deck nozzles, modified piping drains on the scrubber water supply and replaced cleaning shower nozzles. The company says replacement of the multi-cones increases the efficiency of this dust collection stage, resulting in less particulate exiting the boiler.
Northern Pulp is working with AH Lundberg Systems Ltd. of Vancouver to follow up on further suggestions made during a 2014 power boiler scrubber audit they conducted. In addition, the company has contracted a boiler specialist to conduct a complete review of the entire power boiler system.