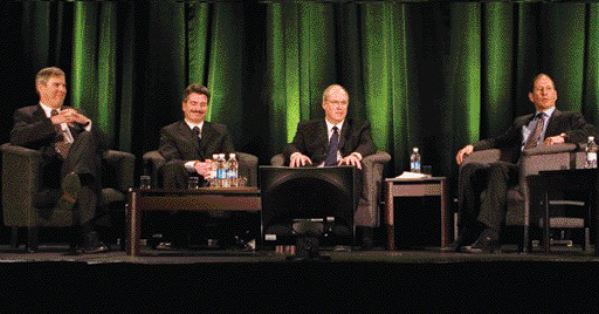 It’s been a painful few years for pulp and paper in Canada and the industry is not out of the woods yet. Yet, the future is not all bleak, said some of the most influential people in the industry at t…

It’s been a painful few years for pulp and paper in Canada and the industry is not out of the woods yet. Yet, the future is not all bleak, said some of the most influential people in the industry at the CEO Armchair Dialogue on the last day of PaperWeek International.

The Canadian forest products industry has grown to become the world’s largest exporter of forest products, an $84 billion industry representing 3% of Canadian GDP that continues to benefit enormously from the quality and diversity of Canadian fibre, its proximity to the huge U.S. market, the abundance of water and, in some provinces, relatively inexpensive electricity.

“The world likes Canadian fibre,” said Canfor CEO and president Jim Shepherd. “We know the game and we should not lose sight of that. We have to make sure we stay in front, but we will see a lot of change.”

Shepherd, along with Tembec president Jim Lopez and Hank Ketcham, president of West Fraser Timber, spoke on the future challenges and opportunities of the forest products industry in Canada. Ketcham told the audience how this industry is one of the backbones of the country and that to survive and prosper in the current economic climate, people will have to invest in their mills and constantly be at the forefront of new technologies.

Shepherd added that we should not be afraid of changes ahead. “When you stop seeing change, then you should be afraid,” he said.

All three speakers urged for better competitiveness within the industry to offset the emerging global markets for pulp and paper. “The funding in the industry is sorely lacking in research and development,” said Lopez.

Just before the talk, Minister of Natural resources Gary Lunn announced $127.5 million to address long-term competition in the industry, of which $70 million will be for new innovations. Shepherd said this is a step in the right direction. They also stressed the importance of promoting the industry to the world. “We have an issue on how to compete in other areas of the world,” said Shepherd. Ketcham said to do this, the industry first needs to build its expertise at home. Not only do the three CEOs hope to increase the Canadian industry’s presence within the world market, but also there is a sense that Canadians themselves have a negative image of the pulp and paper industry. Although the industry has sometimes been portrayed as environmentally unfriendly, Lopez disagrees. “Canada has a great story to tell when it comes to sustainability and sustainable forest management,” he said. “We have improved our practices over the last two decades to the point where we are now a world leader in progressive forestry practices, wildlife conservation, climate change mitigation and efficient utilization of resources and raw materials.”

Also, few in the general public know about the mountain pine beetle infestation — a situation some are describing as ‘a plague of biblical proportions.’ “Millions of acres are going to die,” said Ketcham. “But no one knows. If this was a forest fire, it would be all over the news.”

Global warming has pushed the industry to search for new ways to reduce its environmental impact and Lopez says, about stricter regulations, “we are raising the bar every year.”

There is also a push in the industry to attract new talent and workers to the decreasing workforce. “Within five to ten years, 30% of employees will be retiring. But many young people are not viewing this industry as it is,” he said. Shepherd told students to look into working for the forest products industry. “You might be surprised by what you see. We are in an interesting time in the industry.”