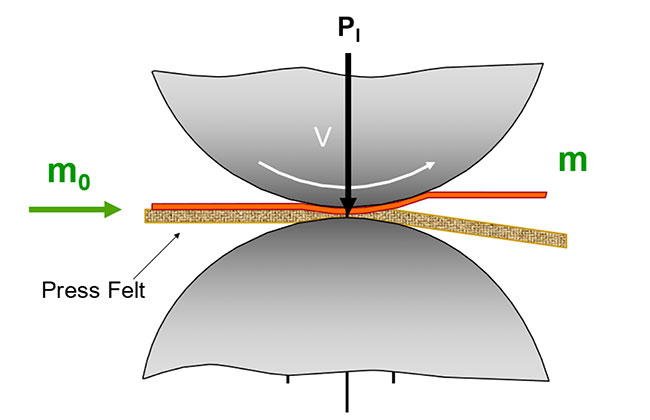 Drying is the most energy-intensive operation in the pulp and paper manufacturing process. Agenda 2020 (now APPTI) estimated that the paper industry in the United States alone consumed 400 million GJ/year of energy to dry paper at a cost of $1.5 billion [1]. Given this cost and environmental impact, reduction in drying by increased pressing is a critical objective of the industry. For this reason, APPTI set the ambitious goal of reaching 65 percent solids entering the dryer section. Considering that the current level of dryness after the press section ranges from 45 to 55 percent, and there are over 10,000 paper mills in the world, even a small improvement would have a significant impact on the world’s carbon emissions.


The first step in improving pressing is understanding the factors that control it. Pressing is a non-linear process having many inter-related variables, making it difficult to study. Moreover, the process takes place in a matter of milliseconds over distances of a few centimetres, making it the proverbial black box. A mathematical model is necessary to untangle this process.

There has been a long history of modelling pressing. Pressing exerts pressure on wet webs causing water to flow from the web into the felt(s) and cavities in the backing roll(s) (Figure 1). Because the web is mostly water, early models assumed that initially pressure was exerted on the water between fibres and as the water was removed, pressure shifted from water to fibres which provided structural support. However, this approach had serious shortcomings. For example, it did not predict the widely held observation that press impulse (pressure multiplied by time or the equivalent, line load divided by speed) accounted for most water removal over a wide range. The problem occurred because fibres are not solid, impermeable cylinders. Rather, they are porous flexible structures containing substantial water. Applied pressure acts not only on the water between fibres but also on water inside fibres by pressing on their flexible walls. As water is removed in pressing, water facing low resistance flows out first, followed by water facing higher resistance in smaller channels between fibres, and then from the increasingly smaller pores from within fibres. In short, the problem is one of decreasing permeability. This has been successfully modelled by a Decreasing Permeability Model (DPM) [2].

In addition to permeability, two other important factors govern pressing. First, there is a limit to the amount of water that can be removed by pressing. The web reaches an equilibrium moisture when pressure is applied for a very long time [3]. Second, when pressure is released, some water expelled from the web may flow back into the web or simply stay with the web when separated from the felt. These actions are termed rewet [4].

The above factors acting together determine the amount of water remaining in a web after pressing. The amount may be expressed as moisture ratio, the weight of water divided by the weight of fibre. This is the inverse of solids content which is normally used by the industry. The moisture ratio resulting from pressing is illustrated by a characteristic pressing curve for a typical paper machine (Figure 2).

In the flow-controlled regime, water removal is dominated by the flow between and from fibres. In the pressure-controlled regime, the surface tension of water in the pores of the fibre cell walls and rewet dominate. These regimes correspond to terms in the Decreasing Permeability Model equation as illustrated in the figure.

As shown in Fig. 2, there are two major regimes of pressing. One is “flow-controlled”, dominated by the first term in the equation which describes water flow from between and within fibres. The governing parameters are press impulse (I), basis weight (W), viscosity of water (γ) and two furnish dependent coefficients (A,n), as well as the incoming moisture ratio is m0. The other regime is “pressure-controlled “(or rewet regime) which is dominated by the equilibrium moisture (me), and rewet R. These two regimes are commonly plotted against the inverse of basis weight which at low basis weight gives a straight line with slope R and intercept me. 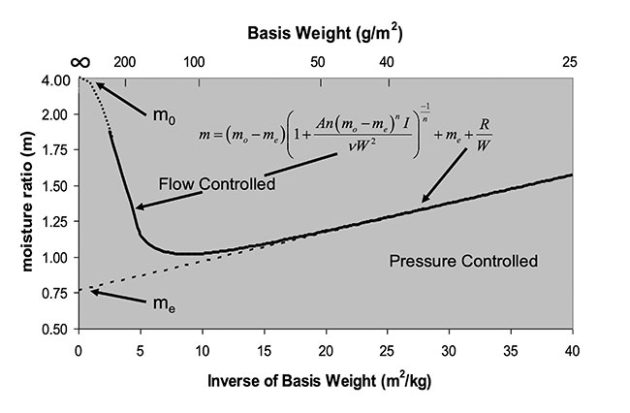 Figure 2: The moisture ratio after the press section of a typical paper machine is plotted against the inverse of basis weight [4]. ]. In the flow-controlled regime, water removal is dominated by flow between and from fibres.


The first step in optimizing a press section, or evaluating new equipment, is identifying the regime of operation which determines the changes that may increase water removal.  In the flow-controlled regime, moisture ratio is lowered by increasing press impulse (I), lowering basis weight by meeting quality specifications by other means, or raising the web temperature (which lowers water viscosity, γ). In the pressure-controlled regime, the moisture ratio is lowered by increasing the peak pressure in the nip to lower equilibrium moisture me or felt selection to reduce rewetting.


There is a limit to the amount of water that can be removed from a web using mechanical means [4]. At a given pressure, the web will reach an equilibrium moisture beyond which additional water cannot be pressed out. This is particularly important for lightweight paper grades (< 100 g/m2) where  pressing has removed the majority of water that constitutes the flow control regime. Removal of additional water requires increased peak pressure. At the highest peak pressures in commercial presses, equilibrium moisture approaches 60 percent. Although higher peak pressures could achieve solids contents greater than 60 percent, the cost of more durable roll covers and felts are a barrier. There may also be paper quality concerns. Unless the cell wall of fibres can be modified through enzymes or genetics, to permit easier water removal, the goal of higher solid contents after pressing has reached a physical limit.


After mid-nip, some expelled water may return to the web. This action, called ‘rewet’, proceeds by two mechanisms: water flows from the felt back into the paper (flow rewet) andwater remains with paper surface during separation of the felt and paper (separation rewet) [4]. The flow term depends on the web-felt contact time in the expanding nip and post-nip. This form of rewet is remedied by minimizing contact time after the nip.

Separation rewet is the portion of water at the felt/paper interface that stays with paper upon separation. It is strongly related to the surface structure of the felt. Water at the interface splits in proportion to the surface tension forces exerted by each material. This rewet can be reduced by using felts with finer batt fibres (but this is limited by plugging), increasing the surface energy of batt fibres, pressing to lower moisture content, minimizing post-nip contact between the felt and web and, in shoe presses maintaining high pressure until abrupt decrease at nip exit [4]. 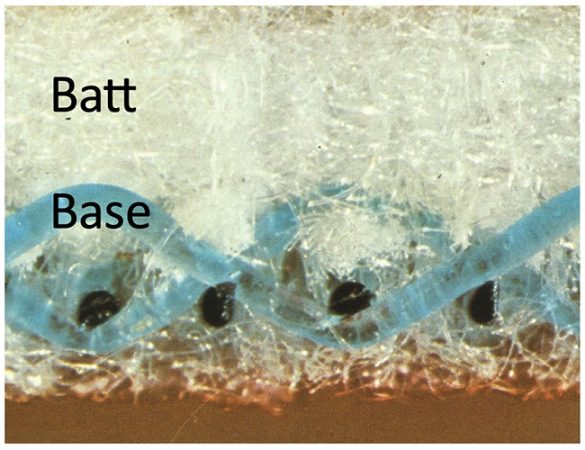 Figure 3: Cross-section of a batt-on-mesh felt showing the batt and woven base fabric.
Image: AstenJohnson


For years, it has been a common belief that a uniform pressure distribution on a web gives better water removal. But is this really true? This conviction is based on observations that, for lightweight papers, felts with a more uniform structure and finer batt fibres (Figure 3) give higher solids content after a press. This result has been attributed to more uniform pressure. However, there are two mechanisms in play: water removal in the press nip and rewet when pressure is relieved in the expanding nip. Which one dominates? Recent findings have shown that higher solids from finer felts is due to less rewet [4].

Felt structure is also important for market pulp where basis weights range from 600 to 1,100 g/m2. It is a common observation that pulp pressed by coarse felts which apply non-uniform pressure, require less energy to dry in air flotation dryers. The accepted wisdom was that the larger exposed surface area of the embossed pulp sheet gave better heat transfer and evaporation in the dryer. However, somewhat surprisingly, it was shown that non-uniform pressure, not a larger exposed surface, caused the higher solids content [5]. Highly pressed zones produce low local permeability which provides high resistance to water flow. However, water can easily flow in the plane of the web to adjacent lightly pressed areas that have low resistance to exit the web. Evidence obtained using an instrumented pilot press suggests that this same phenomenon takes place using finer felts for lightweight grades. Finer felts remove less water mid-nip but give less rewet than coarse felts. Because rewet dominates, the net result is a dryer sheet.


Wet pressing matters. A dryer web entering the dryers will lower operating costs by lowering energy consumption. The decreased energy will also assist in the industry’s contribution to mitigating climate change. Through modelling, it is possible to identify and optimize the key factors that affect press section dewatering.