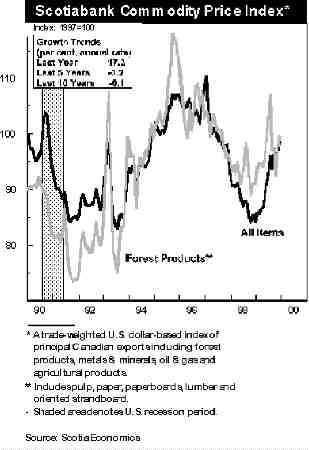 Scotiabank’s Commodity Price Index — a trade-weighted U.S. dollar-based index of key Canadian resource exports — climbed 17.3% above year-earlier levels in late 1999. The Industrial sub-component — consisting of Forest Products, Metals & Minerals and Oil & Gas excluding agriculture — has advanced by a solid 19.9% over the past year. Commodity prices will continue to move ahead through 2000 alongside widening global growth, yielding strong profits in Canada’s resource industries (21% of TSE 300 market capitalization).

In many cases, profit margins over break-even costs are already quite robust: 30% for BC interior pulp producers, about 50% for Canadian nickel mines and smelters and 40% for crude oil producers in Western Canada (after depreciation & depletion, but before any debt servicing costs). The accompanying improvement in equity valuations has already been dramatic, albeit from very depressed levels in mid-1998. The TSE Paper & Forest Index has climbed by about 70% from the August 1998 low through late January 2000, just edging out gains in the TSE Metals & Minerals Index at 64%. The TSE Oil & Gas Index has increased by 49% from the February 1999 low.

The forest products sector is starting the new millennium on a positive note, with announcements of price increases for a wide range of pulp and paper products (newsprint, coated freesheet and linerboard) and still healthy lumber and oriented strandboard prices. The fourth quarter consumer inventory build, ahead of any Y2K problems, appears to have been quite limited and the feared slowdown in early 2000 orders is not occurring. Lightweight coated papermakers are entering the new millennium with full order books, partly due to ongoing strength in magazine advertising by dot.com companies. So far, the Internet has expanded the overall advertising pie, rather than reducing ads for more traditional media. Advertising should remain strong this year as global marketers position their brands as leaders for the new century.

Northern bleached softwood kraft (NBSK) pulp producers implemented another US$30 price increase in January, taking prices to US$640 per tonne in the United States and US$630 in northern Europe. List prices have climbed by 31% since the February 1999 low.

Norscan pulp shipments surged in December and mill inventories dropped to only 16.5 days’ supply, the lowest since February 1995 at 18 (using seasonally adjusted data). European consumer inventories are also low, confirming strong paper consumption last summer and fall, especially in Germany. The Asian spot market is tight with prices in a US$650 to 660 range in mid-January. NBSK pulp prices are expected to climb to US$700 by late 2000, a welcome development for producers across Canada, but particularly in BC, which accounts for 22% of world bleached softwood kraft market pulp and 36% of global NBSK capacity.

Prospects also appear bright for uncoated freesheet paper in the important U.S. market, despite some price slippage in late 1999 linked to a normal seasonal slowdown in commercial printing of direct mail fliers. American orders picked up again in mid-January and U.S. imports of Asian cut-size paper have been checked by high container shipping rates and a new duty on imports from Indonesia. New Chinese paper mills have also been slow to qualify their paper in the U.S. market. Capacity in the United States has recently been reduced by mill closures and capacity expansion will be less than 0.5% per annum through 2001.

Lumber and oriented strandboard prices in North American markets remain at lucrative levels in early 2000, but will probably decline in the second half of the year due to higher U.S. mortgage rates and a waning in pent-up demand. Housing starts in the U.S. jumped to an exceptional 1.712 million units annualized in December 1999 — boosted by unseasonably warm winter weather and record U.S. consumer confidence, linked partly to virtual “full employment”. Starts totaled 1.675 million units in 1999 as a whole — a 13-year high. However, U.S. 30-year mortgage rates have already climbed to 8.26%, 1.8 percentage points above the October 1998 low and will probably increase further.

With pulp and paper prices moving back to normal profitability, it will be important in coming years for the industry to slow price increases to keep paper products competitive with substitute materials (e.g. plastics) and competing media. Consumer price inflation in the U.S. was running at 2.7% year-over-year last December, and will probably increase only moderately in the coming year. The sharp rebound in oil and petroleum product prices in 1999 was largely offset by increased productivity stemming from high-tech investments in communications and automation and intense competition from manufacturers in rebounding Asian economies. This competition will continue to limit both wage increases and “pricing power” in many industries.