The magazine has been on-line at www.pulpandpapercanada.com for a few years now, but is not nearly as well known as I feel it should be. Two people at EXFOR 2003 in Montreal at the end of January sugg... 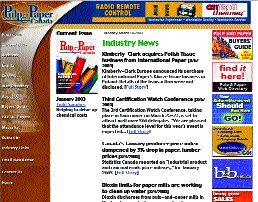 The magazine has been on-line at www.pulpandpapercanada.com for a few years now, but is not nearly as well known as I feel it should be. Two people at EXFOR 2003 in Montreal at the end of January suggested that I mount my own website so that this column could be available to all, and allow people to consult past issues. They were not aware that this service has been available since 1999, and past magazine articles, including this computer column, are available under the “archives” link on the home page.

Recently, the magazine started issuing a weekly newsletter, which is available at no charge. Pulp & Paper Canada subscribers whose e-mail addresses are known to the magazine receive copies automatically. All those interested can request to be added to the e-mail list at the “Subscribe” link on the above-mentioned homepage.

The Pulp & Paper Canada site includes an on-line Buyers Guide, which is similar to the massive directories that mill purchasing departments usually have. The on-line version is always up to date, and is more accessible to most mill staff than the purchasing office. Searching for sources for specific products, or for the telephone number for a company, whose name you know only roughly, is easy and rapid. As vendors change names and ownership rapidly, this can be a great help.

One of the most potentially useful but essentially unused features of the Pulp & Paper Canada site is the career listing. Traditionally, companies looking for staff with experience within the pulp and paper industry had to either advertise across the country in many daily newspapers, or to accept the delay of up to about nine weeks between deciding to place an advertisement and having it in the hands of readers of pulp industry magazines across the country. The usual way to speed up the process was to hire a placement agency, since they routinely had resumes of job seekers on file. I found that such agencies showered me with resums which were often out-of-date, and most of which were of marginal interest.

I just looked at one of the largest career sites on the Internet, and noticed that most of the jobs are offered by placement agencies. Why would an employer pay agency fees (typically one to two months salary for the job concerned) rather than advertise directly, now that immediate exposure is available on the Internet?

The survival of the traditional employment agencies surprises me, and shows that those hiring have not (yet) adapted to the Internet age. The situation brings to mind a comment in this column in the 1980s: “The person who can persuade a secretary to e-mail a message across the country in ten seconds for ten cents, instead of by using an overnight courier for $25 will make his fortune”. E-mail was widely available for at least ten years before it became widely used. It seems that the job-finding business is currently in this interim phase.

There is an opportunity here for mills and others to speed up hiring, while saving money. If a staff member resigns, you can have an advertisement on the P&P Canada website within hours. The cost depends on exactly how you want to advertise, but it is substantially less than having an agency do it for you.

The famous chicken-and-egg question is key here. The site needs ads, and the ads will come if people who are job hunting routinely look at the site. I feel that an active career page focused on the pulp and paper industry would be a benefit to both employers and to individuals concerned, so let us hope people start using the tool.

Many of the papers presented at PAPTAC conferences are available on-line, but only to PAPTAC members.

Protection against viruses and worms, etc.

We have discussed this issue before, but the amazingly rapid spread of the “Slammer” worm recently, and discussions I had at EXFOR, suggest that the subject is worth revisiting.

If you have a corporate guru looking after your virus protection, then rule number one is to follow instructions. If not, the following approach should keep you out of trouble.

1) NEVER run a computer connected to the Internet, or other network, without the most recent version of a major anti-virus program in operation. Norton 2003 is the market leader, but McAfee is a major force also.

2) These programs rely on you having updated virus data files on your computer. These should be updated at least once per week. This can be automated in current anti-virus software. Annual subscriptions are required to maintain the system, and are well worth paying.

3) Check the sites that major software vendors (Microsoft, Adobe, IBM etc) operate for security upgrades. Microsoft is the most vulnerable, since they provide a high proportion of today’s software, so the hackers attack it most frequently. They publish many upgrades, at no charge, which plug loopholes found by hackers. Unfortunately, only about half the computer users bother with the upgrades. Where possible, set your software to upgrade automatically.

4) Watch the company you keep. If you connect to sites offering great wealth for little work, incredible health enhancements etc., you increase your risk of contracting Computer Transmitted Diseases (CTDs). Warn your kids. They are naturally inquisitive, and are less skeptical than adults.

Remember that mixing home and office computers can be a weak point. Home computers can often access the office network nowadays, and it is not uncommon for laptops to circulate between the office and home.#text2#

Related
Kruger to install syngas system
FIND THE ENVIRONMENTAL INFORMATION YOU NEED
Dryden: A mill by any other name still tops
Planning and Budgeting for Safety in 2003: a Guide