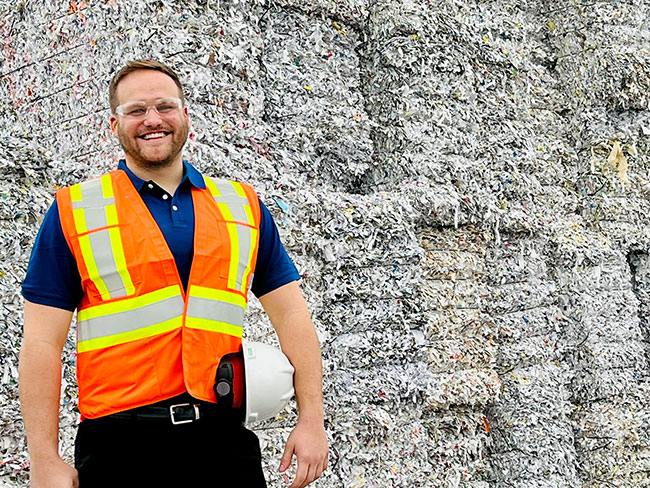 The future of the pulp and paper industry is in good hands!

Armed with a strong work ethic, initiative, curiosity, and a commitment to training and safety, the 2022 winners of our Top 10 Under 40 program are positioned to take the industry forward.

Whether they work in leadership, operations, maintenance, support or human resources, these pulp and paper employees are highly regarded by their colleagues and peers.

To highlight the achievements of each individual selected for the Top 10 Under 40 list, Pulp & Paper Canada will feature one of 2022’s winners every week for the next 10 weeks. Nominations for the 2023 contest open at the end of the year.

Alexandre Desilets started his career as a junior process engineer at Cascades ULC Research and Development in May 2011. One of his first mandates was to support the start-up of the Greenpac plant in Niagara Falls. He participated in the successful implementation of the equipment and ensured its efficiency by performing standard operating procedures.

In January 2014, he became a relief supervisor at Cascades Tissue Group-Candiac (CTG-Candiac). He was then assigned as a rotating shift supervisor at the start of machine #2 with Atmos technology. Alexandre actively contributed to the understanding and mastery of this new technology, as well as the manufacturing of a superior quality structured tissue paper (TAD paper). Through this project, Alexandre distinguished himself by his involvement and perseverance as he learned the papermaking trade the hard way. He showed great curiosity about the ins and outs of the papermaking industry, making him a better leader on these projects. In July 2015, he became the supervisor of Machine #1 at CTG-Candiac. On his own, he took on the complete management of this paper machine. He worked on the composition of the pulp by including more and more virgin pulp, in addition to improving the production rates.

Alexandre continued his journey, says Benoit Rouillard, general manager at Cascades Tissue Group, by agreeing to help at Cascades Tissue Group-located in Kingsey Falls as an interim production manager. Alexandre’s commitment and support to the team earned him the position of production manager in November 2018. His growth did not stop there. A year later, Alexandre was promoted to plant manager at the facility, as many recognized his excellent leadership skills.

“He is a unifying leader who values team spirit. His significant technical expertise and management skills make him a great plant manager and an excellent leader to have on our team,” says Rouillard.