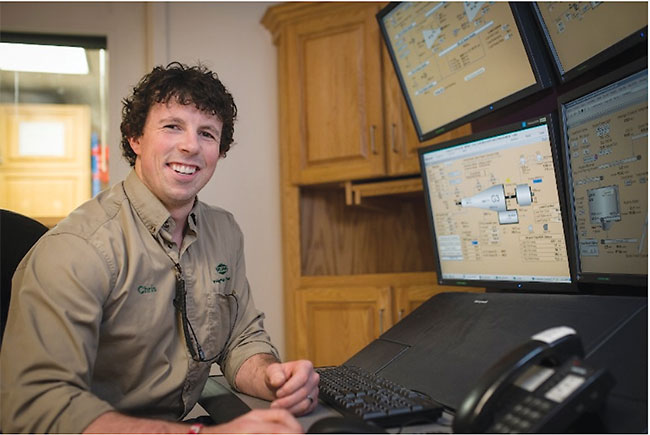 The winners of Pulp & Paper Canada‘s first Top 10 Under 40 competition, revealed earlier this year, are our industry’s shining stars.

Whether they work in operations, maintenance, sales or technical support, these leaders-in-the-making all share several things in common: a strong work ethic, initiative and curiosity, and a commitment to training and safety.

To celebrate their success so far, we’re highlighting each of the 2020 winners ahead of the Apr. 9 deadline for the 2021 competition.

Whether it’s working full-time at J.D. Irving, Ltd. (JDI), furthering his education or focusing on his family, “Chris Clark is a driven individual, who pours hard work into everything he does,” says his friend Keegan Drummond, account manager at Source Atlantic Limited.

Now a mill manager at Irving Tissue, Clark, 31, got his start with JDI at high school graduation, when the company offered him a scholarship to put toward his studies at New Brunswick Community College (NBCC).

“Chris Clark is a driven individual, who pours hard work into everything he does.”

While there, Clark spent evenings earning his bachelor’s degree in applied management from the University of New Brunswick. In 2016, he moved on to JDI’s Irving Paper – and began studying again for his Ivey Executive MBA, which he completed in in 2018.

Clark applies the same drive to his extracurricular activities, says Drummond. While studying for his MBA, Clark also trained for the Ironman triathlon and completed it the same month he graduated. “I am truly interested to see where he will go from here,” Drummond says.

Nominate a colleague in the 2021 Top 10 Under 40 competition by Apr. 9! For criteria and nomination forms, click here.