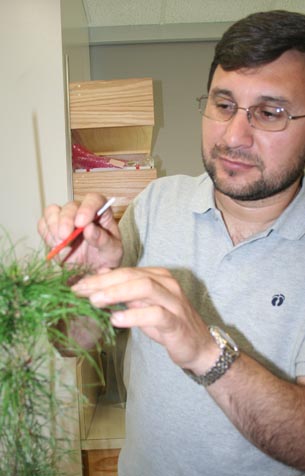 Like a human being who, with a compromised immune system, is vulnerable to secondary diseases, jack pine trees…

Like a human being who, with a compromised immune system, is vulnerable to secondary diseases, jack pine trees ravaged by budworms may be more susceptible to an invasion of mountain pine beetles.

A University of Alberta news report explains that Nadir Erbilgin is receiving almost $300,000 to explore how to protect Canada’s jack pine forests from the mountain pine beetle, which is already laying waste to the country’s lodgepole pine trees.

“Cold climate is basically what has kept the mountain pine beetle out of Alberta forests, and not just Alberta, but also some areas in British Columbia,” says Erbilgin, a Canada Research Chair in Forest Entomology and assistant professor of renewable resources at the U of A. “The pine beetle has a limit of about minus 40 Celsius, but we are now facing global warming, which brings higher temperatures at northern latitudes, so that could change.

In fact, he says, it is changing.

Erbilgin has been awarded the Alberta Ingenuity New Faculty Award, worth $299,790. He will investigate the invasion dynamics of the mountain pine beetle in jack pine forests and its interaction with another important forest pest, the jack pine budworm.

Because the budworm only feeds on the foliage, the timber still has economic value if harvested before a mountain pine beetle outbreak.

The findings could help identify jack pine forests that are at risk of invasion by the mountain pine beetle, so vulnerable trees can be cleared to avoid encouraging population growth of the insect into new areas. The information could also be used to predict where beetles could disperse and successfully establish themselves.

Currently, jack pine forests have not been attacked by the pine beetle, though hybrid forests of lodgepole and jack pine have been invaded.

Jack pine forests extend east of the Rocky Mountains, all the way from the Northwest Territories to Nova Scotia, and provide the main source for timber industries in Manitoba and Ontario. The jack pine grows further north than any other pine and is the most widely distributed pine species in Canada.