July 23, 2019 – Most digester operators manipulate their cooking conditions by focusing on a Kappa number target.

Maintain ideal levels in kraft pulping, from the digester to the recovery cycle

Not all digester operators are aware that the sulphidity percentage level of the white liquor is a very important driving force during delignification. In many pulp mills, the sulphidity data stays in the recausticizing area – and in very few mills is it actually included in the digester daily log sheets.

Variations of all of the above factors have profound effects on the complex performance of the digester (digester variability) and on the uniformity of the produced pulp (quality variability). Therefore, non-uniform kraft pulps can result from various sources such as insufficient liquor flux and/or uneven temperatures and/or unequal chemical distribution (chemical concentration gradient) within the digester, etc. These non-uniform pulps are weaker, harder to bleach (i.e., more chemicals, higher costs, more toxins) and may complicate downstream papermaking operations.

From the above list of parameters, the residual effective alkali in the blow line is the one that needs special attention for its effects in the bottom of the digester and other areas beyond the digester (i.e., brown stock washers, bleaching area, evaporators and recovery boiler.) The blow line residual effective alkali dictates the quality of the pulp and of the black liquor.

Residual effective alkali in the digester
The alkali charge or alkali/wood ratio is one of the most important control variables and its monitoring must secure a stabilized cooked pulp quality. Many mills rely in their traditional laboratory analyses for controlling their alkali concentrations; however, these measurements are not carried out frequently enough for accurate control. Using online analyzers secures quick and accurate measurements that can be integrated in the alkali/wood ratio to stabilize part of the pulping process.

When working with continuous digesters, it is important to monitor the residual effective alkali from top to bottom of the digester using an alkali-profile control strategy to get a more stable reading of the digester alkali profile. This profile allows digester operators to make corrections in case the alkali concentration in a stage or cooking zone drops too low, because condensation reactions of lignin can lead to the formation of stable carbon-carbon bonds. See figure 1. 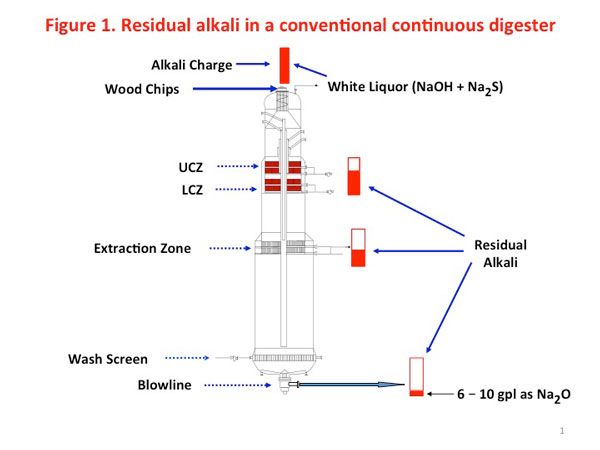 The above modern processes can alter the traditional chemistry of the weak black liquor that is fed to the evaporators. The ideal control and monitoring of a continuous digester should include:

For instance, if we know the residual effective alkali at the UCZ every five or 10 minutes, then we can correct continuous variations of the wood moisture content or the white liquor concentration or the sulphidity percentage levels. A mill with low budget looking to purchase only one out of the above three online control systems should buy the residual effective alkali control system. 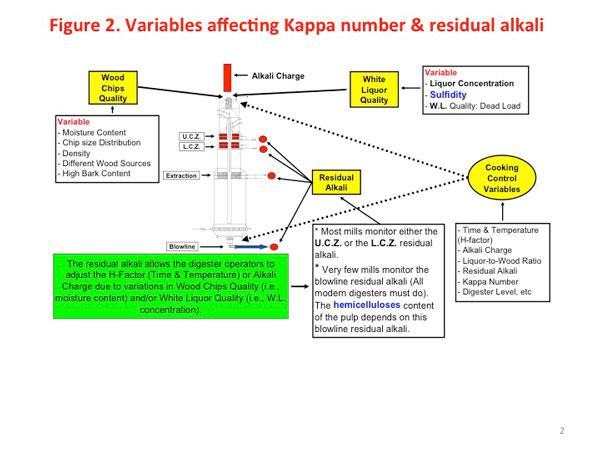 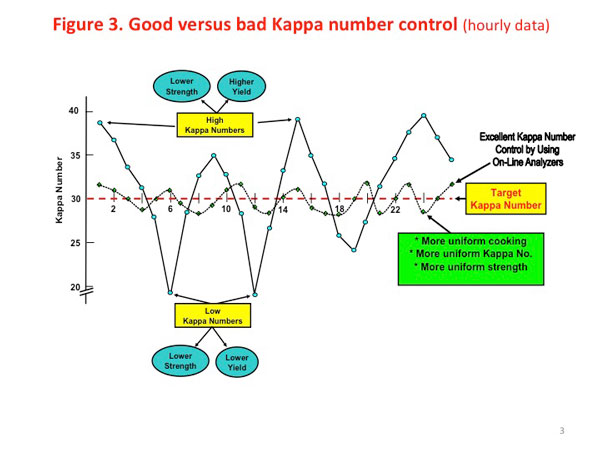 Residual effective alkali in the blowline
Even though the bottom of the digester is the last part where the pulping process takes place, it is very important to keep enough residual alkali there so that the lignin that was fragmented at the top of the digester must stay in solution even after going through the whole digester. Many mills in North America work in the range of residual effective alkali between 2.0 to 4.0 g/l as Na2O.

The blowline residual effective alkali should be kept at a reasonable amount within a minimum range between 6.0 g/l –to- 14.0 g/l as Na2O.

The negative effects of low residual effective alkali include re-condensation and re-precipitation of lignin, lower bleachability, lower fibre strength of the pulp, increased corrosion at the bottom of the digester, and increased problems in the liquor recovery cycle in the evaporators and recovery boiler.

The positive effect of low residual alkali is the hemicellulose re-precipitation that takes place on the pulp, causing an increase of the pulp yield.

If the residual effective alkali is too low, then the fragmented lignin re-condenses and re-precipitates onto the pulp at the bottom of the digester. When that occurs, everything that was done at the top of the digester (i.e., pre-steaming, delignification, usage of cooking chemicals, steam, time, energy, labour, digester space) is wasted.

Very low blowline residual effective alkali in the black liquor coming out of the digester may affect other areas such as brown stock washers, bleaching area, evaporators and recovery boiler. See figure 4.

Residual effective alkali in the bleaching area
When the re-condensation of the fragmented lignin takes place, most of the newly bonds of the re-condensed lignin are mainly of the stable C–C type. These carbon-carbon bonds can be between phenyl groups and also between the three carbon side chains. (Natural lignin molecules in both softwood and hardwood trees contain 50 to 60 per cent of the most easily broken C–O–C ether bonds that simplify the kraft pulping processes. Then, we must avoid the re-condensation of lignin to prevent problems in the bleaching area. It seems that only nature can make the C–O–C bonds at the proper, natural conditions).

The amount of chemicals required for bleaching depends on how the pulping process has been carried out. Conditions of the kraft cooking affect the bleaching response of the pulp or bleachability. This explains the ongoing debates between the pulping and bleaching areas regarding the amount of bleaching chemicals when dealing with pulps of the same Kappa number coming from the same digester. Pulps produced at very low residual effective alkali (i.e., below ideal blowline residual alkali) must require higher bleaching chemical consumption. 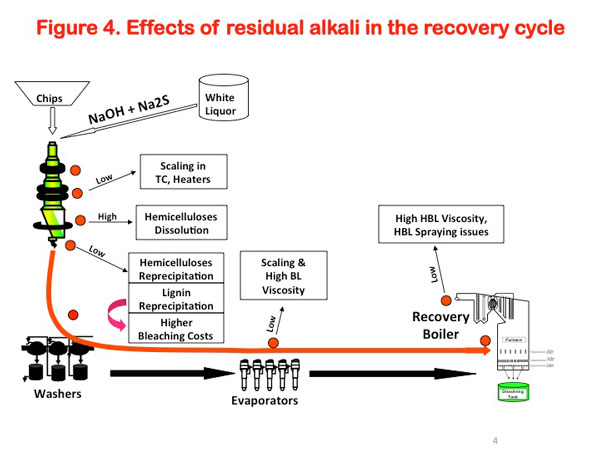 Figure 4. Effects of residual alkali in the recovery cycle.

Most of those benefits depend on the chemical characteristics of the black liquor that include elemental composition, residual effective alkali, composition of the organic and inorganic constituents, and molecular weight of the organic material. The properties of black liquors differ from mill to mill and they are directly related to the alkali charge, yield and Kappa numbers.

The important properties of black liquor that affect the evaporation processes are viscosity, heat capacity, density, the boiling point elevation, surface tension and thermal conductivity. Having low residual effective alkali can cause high viscosity and precipitation of lignin. A minimum residual effective alkali of at least 6 g/l must be maintained to avoid lignin precipitation.

The viscosity of black liquors can be controlled by increasing the temperature or by adding alkali. Alkali addition to the digester or to the black liquor can reduce the viscosity of low–alkali content liquors. An important precaution is to neutralize acidic inputs such as chlorine dioxide (ClO2) generator effluent and tall oil brine into the evaporators set. 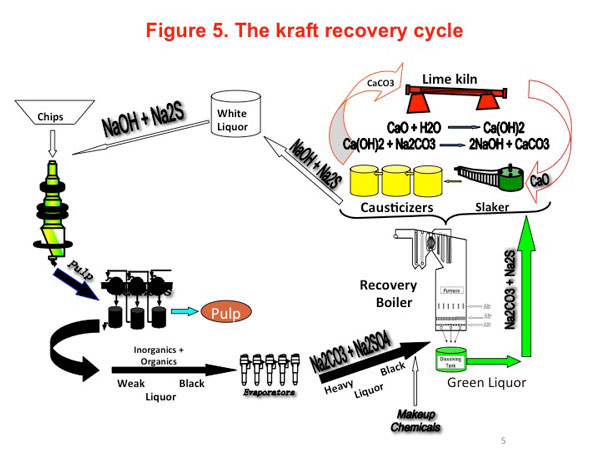 Fouling in an evaporator set occurs due to various mechanisms like lignin precipitation, fibres, soap fouling, soluble sodium (Na) scaling and insoluble calcium (Ca) scaling. Scaling is a very serious problem that reduces the rate of heat transfer and evaporation in the multiple-effect evaporator plant.

Black liquors are characterized by high viscosity when the residual effective alkali is too low (i.e., less than 2 to 4 g/l as Na2O). The solids content also affects the spray characteristics of the black liquor and droplet size distribution of the black liquor through its effect on liquor properties such the viscosity. Uncontrolled drop size (i.e., too big) of the firing black liquor can cause serious blackouts of the furnace. Under practical conditions, the black liquor viscosity can be controlled by the addition of alkali, by oxidation and storage at high temperatures.

The production of a consistent high-quality pulp is a great challenge for digester operators due to the complex nature of the delignification process and the crucial residence times in the different zones of a continuous digester. Both the evaporation and burning processes of black liquor are very sensitive to some disturbances related to the quality and analysis of the black liquor.

The kraft chemical recovery process has three key functions: 1) to minimize the environmental impact of the black liquors; 2) to recycle the pulping chemicals (i.e. NaOH and Na2S); and 3) to co-generate steam and power. See figure 5.

The negative effects of the low residual effective alkali at various areas in the kraft recovery cycle can be controlled, stopped or minimized by either adding alkali to the digester or before the evaporators or recovery boiler.

For a copy of this paper including references, contact kurquhart@annexbusinessmedia.com.

This article originally appeared in the Summer 2019 issue of Pulp & Paper Canada.