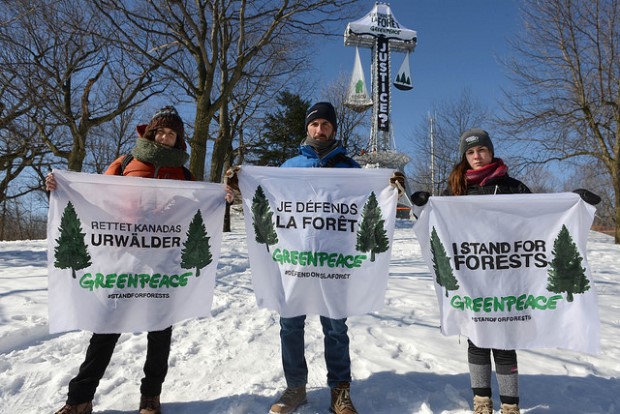 Greenpeace staged a display targeting Resolute in Montreal in 2014.

Resolute Forest Products is once again striking back at groups painting a negative image of the company and its forest practices.

Resolute has filed a federal lawsuit in the United States District Court for the Southern District of Georgia against Greenpeace International, Greenpeace USA, Greenpeace Fund, Inc., STAND (formerly ForestEthics) and a number of their associates. The complaint included federal racketeering claims, and racketeering, trademark, defamation and tortious interference claims under Georgia law.

Tortious interference, according to Wikipedia, occurs when a person intentionally damages the plaintiff’s contractual or other business relationships.

“Our company strives for the highest standards of environmental stewardship, which is why the attacks on us are so obviously cynical and thoroughly irresponsible. We have an obligation to our business ethics, and our many shareholders, customers, partners and stakeholders to draw the line after all other means have been exhausted,” stated Richard Garneau, Resolute’s president and CEO.

These alleged claims arise from, among other things, Greenpeace’s self-described “Resolute: Forest Destroyer” campaign which, according to Resolute, falsely accuses the company of, among other things: (a) “destroying endangered forests,” and “operating and sourcing wood . . . in violation of law”; (b) causing the “destruction of endangered species” and “critical caribou habitat” and risking a “Caribou Herd Death Spiral,” “extirpation” and “extinction;” (c) “abandoning” and “impoverishing” the Boreal’s indigenous communities; and (d) impairing the Boreal’s ability to mitigate climate change.

Resolute’s complaint describes in detail the falsity of these and other malicious and defamatory accusations. Among other things, the complaint explains that far from being a “forest destroyer,” Resolute has planted well over one billion trees in the Boreal (which is one billion more than Greenpeace, the company points out) and is responsible for virtually no permanent lost forest acreage.

The complaint also demonstrates that Resolute also has not impaired the Boreal’s ability to absorb greenhouse gases, and, instead, has improved that ability through harvesting and forestation as recognized and encouraged by the U.N. Intergovernmental Panel on Climate Change.

Nor has Resolute abandoned, exploited or impoverished First Nations or other communities within the Boreal forest, but instead has created and sustained substantial benefits for these peoples through shared economic participation in the forestry business.

The complaint also details how, to support its false accusations, Greenpeace has fabricated evidence and events, including, for example, staged photos falsely purporting to show Resolute logging in prohibited areas and as having harvested areas that were actually impacted by fire.

Resolute is seeking compensatory damages as well as treble and punitive damages.

Resolute’s counsel is continuing its investigation of Greenpeace’s campaign and practices, and has established a telephone line for citizens to provide information on a confidential basis (212 542-4700). A website has also been established (resolutevgreenpeace.com) to catalog information and progress reports on the case.