News
RETURN ON EQUITY REACHESDouble Digits in First Half of 2000 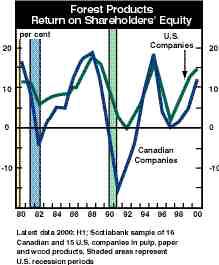 The return on shareholders’ equity in the integrated Canadian forest products sector (wood products as well as pulp and paper) climbed to 12.1% in the second quarter of 2000, up from only 2.9% a year …

The return on shareholders’ equity in the integrated Canadian forest products sector (wood products as well as pulp and paper) climbed to 12.1% in the second quarter of 2000, up from only 2.9% a year earlier. Companies are benefiting from exceptionally strong world economic conditions — accompanied by buoyant print media advertising and strong printing and writing paper demand — as well as tight cost control and cost synergies from the large number of mergers and acquisitions of recent years.

Pulp producers have posted the best returns so far this year. Canada’s three largest pulp manufacturers recorded an average return of 19.8% in the second quarter, despite the sharp decline in North American lumber prices which began to dampen earnings for a major BC producer included in this sample. This stellar performance in pulp largely reflects a 45% gain in US prices for northern bleached softwood kraft from a low of US$490 per tonne in February 1999 to US$710 in the third quarter. The price improvement has been even larger in the European market at 54%.

Although newsprint price increases have lagged behind pulp in the past year, North American manufacturers easily implemented a US$50 price hike in September, taking average prices to about US$600-605 (after small volume discounts) in the eastern United States. These prices yield profit margins averaging at least 23% in Ontario and Quebec — returns likely to increase over the coming year as additional cost synergies are achieved from a large merger.

US newsprint consumption has advanced by 2.9% so far this year — fairly robust for a mature market. Interestingly, a surge in advertising by dot.com companies drove up spot television advertising rates earlier this year, triggering a shift to less expensive print media such as newspapers and magazines. A number of special events — the summer Olympics and the US presidential election — will boost editorial pages over the balance of the year.

The second-quarter return on equity posted in the United States was slightly higher at 14%. This largely reflects the effect of two large tissue manufacturers with outstanding results, in the 30 to 45% range. Tissue products are usually “branded” consumer goods with substantial margins — established through advertising and R&D on “new and improved” products. The considerable US industry consolidation of recent years bodes well for tissue margins going forward.

Despite this year’s progress, financial results in Canada and the US are generally less robust than in the second half of the1980s and in1995 — when global pulp and paper prices surged to unsustainably high levels. While commodity prices have recovered this year alongside strong, synchronized global growth, international markets remain very competitive and inflation relatively low, limiting the upside potential of paper prices. Consumer price inflation in the major G7 industrialized countries has only edged up this year and in July was still running at only 2.2% year-over-year — despite surging oil and gas prices. The return on shareholders’ equity in the Canadian forest products sector averaged 15% in the 1986-89 period.

Economic conditions are expected to remain favorable for pulp and paper producers in 2001. Growth will slow in the US from this year’s sizzling 5.2% pace, but still advance by a solid 3.8%. The Euro Zone should achieve growth only slightly slower than this year’s 3.3%. South Korea and China should also advance by 7.5% and 8% respectively.

However, a number of challenges lie ahead. Firstly, US advertising expenditures will likely increase at a slower pace next year with fewer special events linked to the “new millennium” and less robust consumer spending. A postal rate hike on third-class mail in early 2001 will take a toll on catalogue mailings and magazine circulation.

Secondly, a relatively weak Euro could pose a drag on pulp prices. Prior to the mid-September foreign exchange intervention by the European Central Bank and others to support the euro, US dollar price increases in Europe had translated into a 103% increase in local currency terms. This squeezed the margins of non-integrated paper makers. This partly accounts for the decision taken by several pulp manufacturers not to lift dollar pulp prices further in October. Nordic pulp producers are already enjoying spectacular profits this year. While the euro has edged up off its low prior to intervention, further gains against the U.S. dollar may be fairly modest.

Thirdly, relatively strong earnings in pulp and paper will continue to be masked by weaker results in the wood products sector. The 2000-01 correction in US housing starts — triggered by tightening monetary policy and rising mortgage rates earlier this year — is likely to be modest. While lumber and panelboard prices could bounce off recent lows, substantial improvement is not expected for some time — mostly due to the significant North American sawmill expansion of the past five years.