News
Safety at Stora Enso Port Hawkesbury was no accident !!!! 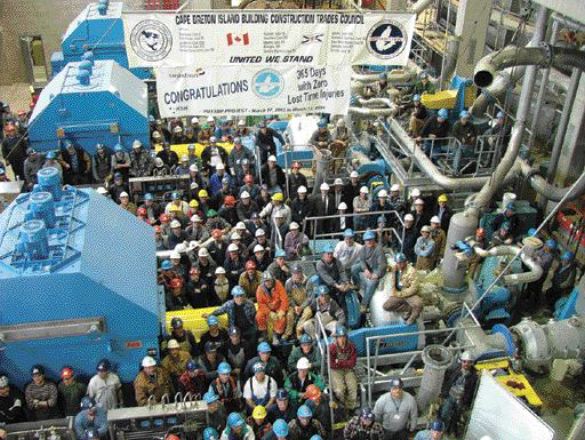 There were many contributing factors which helped in producing such a record, none more important than the 100% commitment of Stora Enso and KSH Solution construction management teams and the Cape Bre…

There were many contributing factors which helped in producing such a record, none more important than the 100% commitment of Stora Enso and KSH Solution construction management teams and the Cape Breton Island Building Trades Council. These forces combined led the charge in satisfying the basic principles of a safety system with respect to management. The four functions of management, Plan, Organize, Lead & Control were well thought out and executed.

After such a plan was put in to action, my job as a safety manager became just that: Manage the plan and stay the course. Having top management’s commitment in respect to safety is crucial to achieving such success. Both were obvious at this project. Did we do anything different? Only to the extent of which our plan dictated. We did all the little things differently, not continually correcting mistakes but preventing them. We did not continually deal with symptoms, but fixed the system if we felt our plan was being detoured.

At no time was our team intimidated by challenges presented before us, we discussed and communicated. There were never challenges of legal, ethical or moral responsibilities and liabilities associated with a poor safety performance that needed to be used to gain the proper decision. They knew/know that safety and a safe job is good business and that safety doesn’t cost, it pays. The answer was always, “Steve, do what you have to do to make it safe!” That is why my job was so very easy to manage.

Accidents cost money, and result in higher production costs, less profits and poor quality. There is no return on money expended on accidents. Accidents reduce efficiency and effectiveness. They are symptoms that something is wrong with the system. Because accidents stem from lack of control, our team at Stora Enso Port Hawkesbury (SEPH) knew that control over people, materials, process and environment was essential.

Maintaining a safe and happy culture through morale was path critical in our achievement. To quote an army general on morale, “the belief by every person that his or her regiment is the best in the army, that his or her company is the best in the regiment, and that he or she is the best soldier in the company.” No soldier, however, can feel that way if his leader makes frequent mistakes. Neither can a worker have that feeling about his job if his department, group or trade has a high accident rate.

At the PM1 TMP project, the construction management team believed in the best standards for the best work force. The team always tried to make the right decision for the good of that work force, in having the people believe they were working at the safest plant construction project giving them a feeling of belonging. As well listening to workers and having issues dealt with as they arose instead of letting concerns fester causing mistrust.

This systems approach to safety has been around for years. That system must be dynamic, a working document, not some fancy creation sitting on some manager’s office book shelf merely being given lip service to. Building a good reputation in the community is second only to building a reputation among employees. Our team built a communication mechanism, which instilled a lot of confidence in our workers, making them feel our commitment.

A good safety record is noticed by everyone and the entire community, as is a bad one. Our safety record gave us a reputation of being a very good place to go to work every day. The fact that accidents are looked at by the community can damage a reputation. Our project was managed by keeping an open mind, communicating openly with the work force and identifying hazards before they became an issue or event and implementing controls to eliminate possible injuries before problems arose.

Remember, safety means more than just tacking up safety posters, passing out rule books and talking about safety. Ultimately, success in safety depends on the attitude of employees, management and all those who are involved in any project or job site.

As a safety person, I pride myself with the passion of one of many who finds this job of managing safety extremely interesting although sometimes challenging. For the most part we speak for management from the “Ivory Towers”, and then run out to the site, warehouse or other to hear how it sounds. We must keep our head in the brass boardroom and our feet in the muck….a difficult position to keep from falling on our butts.

Despite all of this, the gratification of having been involved in any project with a great safety record, is very rewarding to those of us who are sincerely passionate about what we do. Thanks to Stora Enso & KSH Solutions for the opportunity. Special thanks and congratulations to Seldon MacKenzie of SEPH and Pierre Boilard of KSH Solutions for their hard work, tenacity and dedication in securing a safety culture for the present and the future.