Features Innovation Technology
How to scale up Canada’s bioeconomy

The first panel of the day at the 2016 Scaling Up Conference in Ottawa focused on setting the stage for growing a successful bioeconomy. 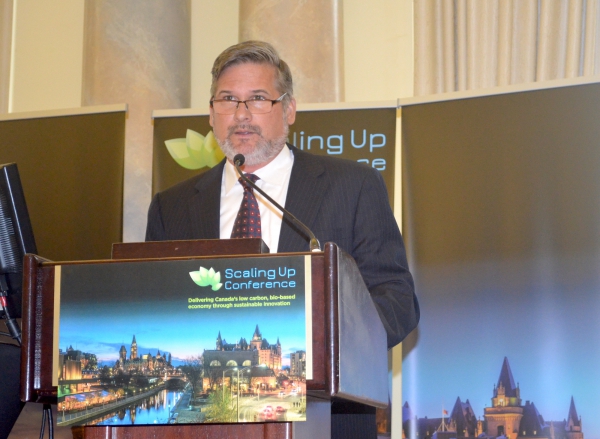 Paul Halucha, Assistant Deputy Minister, Industry Sector, Innovation, Science and Economic Development Canada, discussed how Canada has a lot of advantages it can leverage for scaling up the bioeconomy for attracting investment from companies and a highly skilled workforce. Halucha cited having one of the strongest business environments, world-class universities, a highly educated workforce and a multi-cultural society.

“We want growth not only to happen, but we want it to be clean and inclusive,” Halucha told the crowd.

He said Canada needs to be able get “critical mass” in areas where the country can be an industry leader, adding that the bioeconomy needs to be guided by private sector investment. Halucha said that government could help in the scaling up processes by offering more support for financing at the right times; strategic government procurement to help companies demonstrate their products; improved access to government programs; and flexible and nimble regulations.

She said that growth in the renewable chemicals industry is “explosive” and that by 2020 global sales will range between $375 billion to $400 billion.

One significant factor Singh touched on in the growth of the renewable chemicals market has been supportive policies resulting in scale up and commercialization in the U.S., including the 2014 Farm Bill which provides load guarantees, the BioPreferred program, and the Biomass Crop Assistance program.

According to the USDA economic impact analysis of jobs produced in U.S. through the bio-based economy, Singh stated that about 4.2 million direct and indirect jobs have been created in the sector.

Canadians will need to significantly improve the efficiency in which we use fuel and that increased electrification in the end-use pie is vital for meeting the climate change targets for a low carbon future, Torrie said, noting that the electricity supply has to be decarbonized.

“In these low-carbon scenarios electricity use needs to get up over 50%,” he said. “You do tend to hit a wall when you get up over 50%. I would argue at this point, it is not possible to image an all-electric economy in any of the OECD countries – it’s still going to need a heck of a lot of liquid fuels… and in a carbon neutral economy, it has to be biofuels.”

“There’s not enough attention being made to the innovation in the forest sector,” Mason said, noting that some of the forestry sector’s innovation in the bioeconomy has come out of necessity stemming from companies finding ways to adapt to the steep declines being experienced in the production of newsprint. He added that government has a role to play in the building of the bioeconomy and that the pricing of carbon, as well as the pricing of oil and gas have presented challenges for the bio-industry.

To help build a long-term plan to grow forestry’s role in the sector, Mason said that a forest bioeconomy framework plan is currently being created and is expected to be ready by Fall 2017.

Scaling up
Brian Foody, CEO of Iogen Corporation – a leading developer of cellulosic ethanol – discussed scaling up cellulosic biofuels and the challenges that many companies experience when scaling up their technologies. He said it took many years and hundreds of millions of dollars before his company hit its targets and scaled up commercially, and that its been a struggle for many of the big players around the world, not just small start-ups.

He said that its vital that the investors remain confident in the market a company is tapping into and that they need to have the confidence to see things through to the end.

“It’s super critical that people believe what you’re after is real,” he said. “Confidence is the mother of investment.”