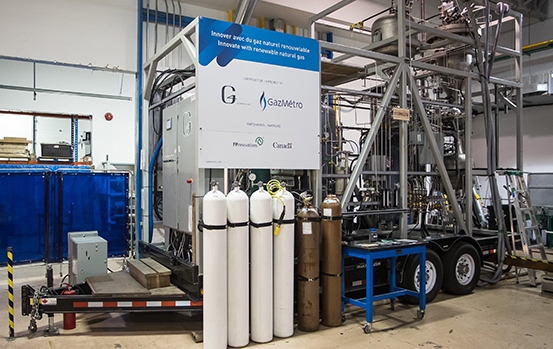 Over the past several months, a Quebec-based natural gas supplier has been conducting a demonstration project aimed at converting forestry biomass into second-generation renewable natural gas.

Gaz Métro says the trials carried out in collaboration with the British Columbia firm G4 Insights at the Natural Gas Technologies Centre in Boucherville enabled it to develop “a conversion process that is unique in the world and marks an important milestone in the development of new renewable energy technology in Québec.”

Gaz Métro and G4 used a thermochemical process called pyrocatalytic hydrogenation (PCH) to transform wood chips from Quebec into renewable natural gas. The process is now ready to be tested in a larger pilot project that will produce greater volumes.

“With this small-scale project, we proved that PCH is technologically viable. It is now essential that we press ahead with our efforts, so as to determine how we can improve the process even further and increase its production potential. Our goal is to use forestry biomass and produce a “green” energy supply of Québec-sourced and renewable natural gas,” explains Martin Imbleau, vice-president, development and renewable energies at Gaz Métro.

Gaz Métro says this renewable natural gas, over the coming years, could be used locally or injected into the company’s network to supplement the renewable natural gas being generated by the biomethanization projects of Québec municipalities that have opted to transform organic waste into energy.

Gaz Métro is the largest natural gas distribution company in Québec, where its network of over 10,000 km of underground pipelines serves some 300 municipalities and more than 200,000 customers.