It was with the memory of those individuals in mind that approximately 300 men and women from the pulp and paper industry made their way from various workshops and conference sessions in an effort to learn about safety, so that further accidents,... 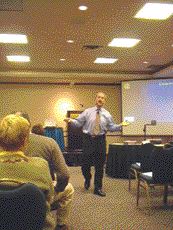 It was with the memory of those individuals in mind that approximately 300 men and women from the pulp and paper industry made their way from various workshops and conference sessions in an effort to learn about safety, so that further accidents, both fatal and otherwise, can be prevented.

Hosted at the Toronto Sheraton Centre, the PPHSA 2004 conference was designed in a manner that permitted delegates over a two-and-a-half day span, the opportunity to familiarize themselves with a tremendous range of subjects and issues. From the technical and hands-on perspective, sessions and workshops that focused on topics such as basic machine safety and workplace inspections were available. From a psychosocial viewpoint, sessions on violence in the workplace, internal responsibility systems, and young worker awareness were also extremely popular and well-attended.

“Everyone is a leader in safety,” said Robert Pater, Managing Director of Strategic Safety Associates. “Our job is to help people become stronger leaders.”

Pater’s keynote address on the opening morning of the conference articulated the pivotal importance of personal leadership and direction when it comes to safety.

“A leader is always dissatisfied, and is therefore always trying to improve. A leader is honest, especially with himself. He has a strategy, meaning he is able to see the strengths and weaknesses in everything. A lack of attention is the main contributor to injuries, and so we have to work to continue to keep people’s attention. Never be complacent. It’s never good enough.”

The imperative role of personal responsibility for safety in the workplace was a theme common to all of the sessions and workshops. In this light, topics such as hours of sleep a worker gets per night, proper eating habits, alertness and awareness became highly relevant.

Personal traits such as irritability, the tendency to feel constantly fatigued, withdrawn and stressed that typically characterize a shiftworker were examined in depth during a workshop session entitled, Shiftwork, Our Way of Life. The manners in which working on a rotating shift exert negative influences on the human body were outlined in a way that emphasized the increased potential for accidents in the workplace when employees are tired. PPHSA Consultant Trainer and workshop leader Thom Foster drove his point home by alerting his audience to the fact that the bulk of the world’s major, human-incurred disasters, such as the Exxon Valdez oil spill, occurred between 10:30 pm and 6:00 am, when the body is most starved for sleep, and will stop at nothing to get some shut-eye.

“Excitement about a job typically lasts between three to five years,” Foster said. “Then workers go through a ‘reality check’. They reach a point of transition, and then people decide to either become a ‘professional’ at what they do, or they ‘rust’ out, and start doing the minimum that their job requires. When you’re really tired, ‘rust-out’ happens between one to three years. We need to enrich people’s work. When you’re doing just enough to get by with work, with home, with yourself, you run the risk of burnout. You run the risk of having an accident.”

A workshop session designed to educate delegates on the intricacies of basic accident investigation called upon participants to partake in an activity that required them to uncover and hammer out the details of an accident that occurred in a mill. Apart from instructing attendants on what to look for while carrying out an accident investigation, the activity also worked to sensitize delegates to the many factors that contribute to, and eventually result in, an accident.

“One of the main purposes of an accident investigation,” said workshop leader and PPHSA consultant trainer Jerry Traer, “is to prevent recurrence. To determine the causes, document them, and remove the hazards, and the trends that created the accident.”

A mock court trial held on the final day of the conference was open to all delegates. Conceived in a manner true to an authentic trial, members of the audience were first provided with all relevant details pursuant to a fatal accident involving a young worker employed in a summer student position at a mill. As two lawyers and participants acting the role of judge and witnesses unraveled the particulars surrounding the case, the trial resulted in a guilty verdict for the mill. Despite the fact that the ‘worker’ had been made duly aware of the hazards his work environment encompassed, and his own personal negligence had been brought to light, it was in the end decided, that the ‘company’ entitled ABC Papers Inc. for the purposes of the trial, was found to be responsible for the accident that culminated in the worker’s death.

The verdict of the trial reiterated the basic premise of the entire conference, that no one is exempt from the responsibilities of safety. Safety in the workplace, and in all other facets of daily life, requires preparation, planning and awareness. And as Robert Pater pointed out using one of his favorite Japanese proverbs, “Vision without action is a daydream. Action without vision is a nightmare.”