At the 2022 edition of TappiCon, innovative thinkers shared ideas to improve the pulp and paper manufacturing processes. 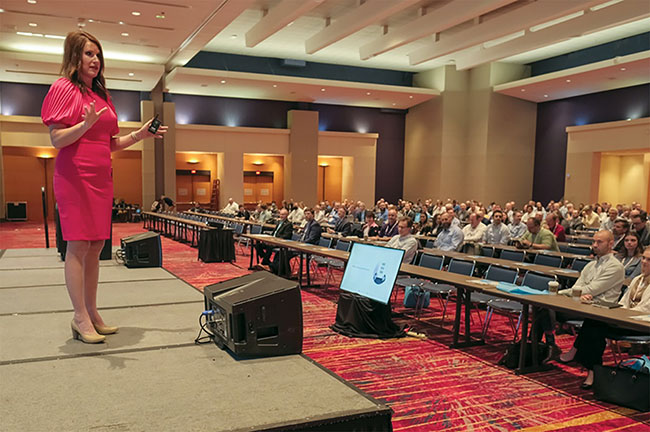 Figure 1. The plenary session at Tappicon 2022 in Charlotte, North Carolina

With 1434 attendees and a sold-out trade show, there was some sense of normalcy at TappiCon 2022 in Charlotte, North Carolina.  But not quite normal. We Canadians were required to take an antigen test 24 hours before departure, causing considerable stress because our commitments could not be fulfilled if we tested positive. Results from random testing on arrival in the U.S. were positive for some participants from Europe, requiring them to isolate in their hotel rooms. Sadly, they missed the conference after travelling so far. Fortunately, colleagues were able to deliver their presentations.

The conference began with a keynote by Jessica Stollings-Holder called “Seeing Differences Differently” which emphasized that success depends on understanding all perspectives (Figure 1). This was followed by the technical program with 145 speakers participating in sessions on a variety of subjects. These include recycled paperboard, tissue, papermaking, papermaking fundamentals, coating and graphic arts, process control, papermaking additives, reliability, maintenance and PIMA management. There was also a poster session and a new technology showcase.  Three sessions were devoted to foam forming, indicating a strong interest in this emerging technology. Preprints and copies of the slides are available from TAPPI. Here are several highlights from the event.

Experimenting for water removal
A long-time goal in the paper industry has been to remove more water in the press section to reduce energy for drying paper.  One limitation on water removal is rewet in which water flows back into the web from the felt as these separate.  This important topic was studied by Sumner Dudick of the Georgia Institute of Technology. He used a novel approach to rupture the liquid channels between the paper and the felt by inserting a mesh at their interface. Using a low-speed screw press, he found that a metal mesh could increase the solids from 48 to 61 percent by reducing the flow of water from the felt to the paper as the pressure was released.

Experiments with nylon meshes also reduced rewet, but not to the same extent. When the mesh had dimensions similar to the batt fibres, the mesh did not reduce rewet. When the mesh size was too large, there was enough water at the interface to cause rewet. By trying different mesh sizes, he was able to find an optimum.

In my view, the low speed used in this experiment caused a combination of in-nip and post-nip rewet. Air entered the paper and felt as they expanded during separation. The mesh provided a collection point for air at the paper/felt interface which disrupted the capillary forces that draw water to the paper, thereby preventing rewet.

The big question to consider is possible commercial implementation.  A mesh on the surface of the felt will emboss the paper with a pattern that can’t be removed by calendering.  This technology would not work for grades that are printed or coated where the surface topography is important. However, it might have an application for market pulp where surface characteristics don’t matter. Interestingly, for market pulp, pressure from a rough surface gives higher pressed solids.

Is it possible to find a mesh size that maximizes water removal in the nip and at the same time minimizes rewet? Given the importance of reducing drying, this topic is worthy of further study, building on the excellent start made in this paper.

A creative solution
Serendipity can sometimes lead to an important discovery when combined with keen observation. Dwight Anderson of International Paper recounted observations on uncoated, woodfree paper machines using a hardwood furnish reinforced with softwood. The machines had “tickle refiners” which were unloaded, but when these refiners were bypassed, sheet formation significantly deteriorated.

On further investigation, they realized that shear in the unloaded tickle refiners was breaking up fibre bundles created by the upstream softwood pulp refiners.  Anderson believes that the longer softwood fibres entangle in the grooves of the refiner plates and appear as spherical flocs which are difficult to disperse in the pulp. By comparing these machines to others without tickle refiners, they realized that these fibre bundles were affecting formation as well as reducing product strength.

The solution was to treat the pulp with shear, but another refiner would be a costly option. Even unloaded tickle refiners consume energy.  This is where creative thinking led to another option: remove the bars from the outer periphery of the refiners and replace these with a tapered smooth section to produce shear to deflocculate pulp as it leaves the refiner (Figure 2). This brilliant idea has been patented and these plates are now installed on several machines where they have been shown to reduce the energy required to refine softwood and OCC pulps by 15 percent.

Figure 2. Refiner plate with a tapered edge creates shear which can disperse bundles of softwood fibres.

Identifying and correcting CD variations
Cross-machine direction (CD)variations of web strength and stretch can significantly reduce the efficiency of tissue converting operations. Frederic Parent of FPInnovations presented several case studies which employed measurements of CD tension profiles and strength/stretch distributions to identify and correct problems.  For example, CD positions with low stretch values were found to also be areas of high tension. The likely source is poor creping due to deterioration of the Yankee dryer surface, which can be solved by resurfacing the Yankee cylinder.

Blade wear will also increase CD variability of tensile strength.  This was monitored using the Weibull distribution where the modulus (also called the m-factor) is a measure of the uniformity.

Blade wear, even after six hours, significantly lowered the m-factor, which negatively impacted converting efficiency, as shown in Figure 3. 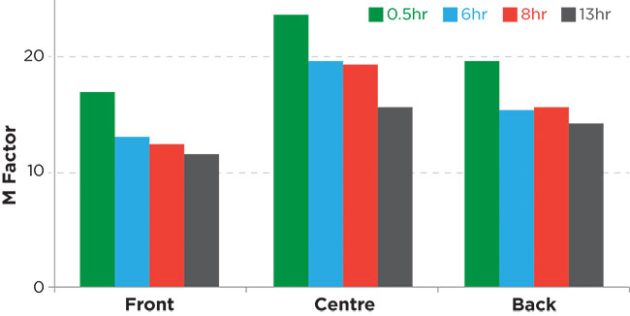 Predictive powers of an equation
Specifications for paper and board are typically based on averages, but paper products don’t fail at points of average strength. They fail at their weakest point. To understand failures, it is necessary to measure strength distributions and in particular the tail of the distributions where the paper is weakest. This raises an important question. Sample sizes used for testing in a laboratory are small. Larger samples will have more weak points and on average will have lower strength.

The TAPPI/ANSI T 494 om-13 method accounts for test span length using an equation which makes a correction proportional to the coefficient of variation and the span length raised to a power. This equation, based on Pierce’s weak-link paper published in 1926, assumes a normal or Gaussian distribution and uses the same coefficients used for yarn.

The equation’s predictive powers for a range of materials and conditions have been astonishing. Joel Panek of WestRock investigated whether the equation would also be valid for a range of different paperboards. He also compared Pierce’s equation to a Weibull distribution, which often is a better model of the tails of a distribution and therefore is important in strength calculations.

Surprisingly, Pierce’s power law equation was found to be robust and gave an acceptable fit to all of the data. For short spans (10 millimetres), the power law equation gave the best fit to the data whereas for long spans (100 millimetres) the Weibull distribution was superior. Panek interpreted this behaviour as a transition from ductile to brittle response with increasing span length.

This successful conference closed with the light-hearted Tapp-Out Luncheon and Awards ceremony where it was announced that TappiCon 2023 will be held in Atlanta from April 22 to 26. PPC