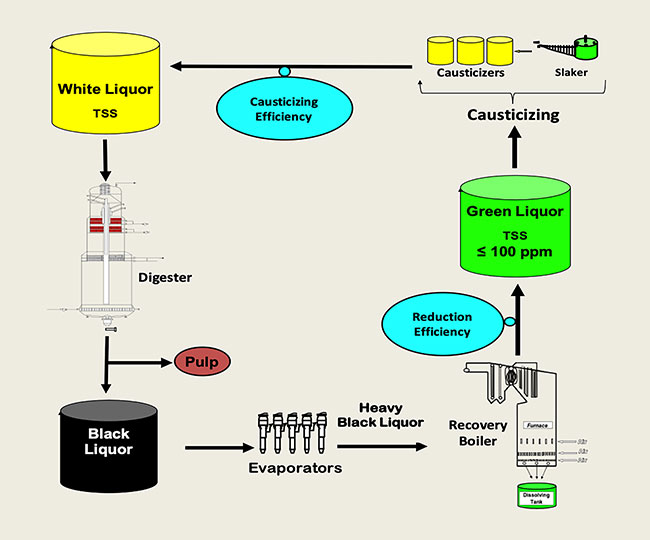 During continuous cooking operations there is a long list of parameters for monitoring that include three groups. These are wood chip quality, white liquor quality and cooking control.

Due to environmental regulations, kraft pulp producers are setting trends towards increasing closure of pulp mills by integrating filtrates from the bleach plant and pulp mill into the recovery system. Therefore, this is a big problem that needs to consider not only the inherent chemical components of the dregs from the recovery boiler (such as, unburnt carbon, silica, non-process elements or NPE, etc.) but also the additional chemical waste coming from the bleach plant (Parsad et al. 1996).

A few kraft mills consider causticizing plants as dumping areas and/or unintentionally neglect them off technical assistance or improvement. Fortunately, green liquor clarifiers can be seen as suitable “kidneys” for control and removal of deadload and non-process elements. However, everything has a limit and it is better not to exceed it. The farther apart you are from a paper-machine, the less attention you receive from upper management and the causticizing plant is at the opposite end.

Poor green liquor quality has negative effects on all downstream operations starting with causticizing efficiency and/or white liquor clarification and/or lime mud quality and/or lime kiln operations (Shrinath and Buettner, 2000). Typical dregs content in green liquor is 700-1500 mg/l (Tormala and Markusson, 2013). If the dregs are not properly removed from the green liquor, then the lime mud generated will have more separation problems (such as, settling and filtering) (Azgomi, F. 2014). This paper discusses some aspects of the white liquor quality based on the amount of deadload and its chemical composition.


Generating high quality white liquor is a very difficult task due to numerous variables involved during its preparation, starting in the recovery boiler and going through the causticizing operations. Most chemical reactions take place in the recovery boiler, slaker and causticizers and the remaining unit operations involve the separation of liquids and unwanted solids.

Important parameters and targets in the causticizing area

Representative composition of white liquor – The most common compounds present in white liquors are given in Table 1.

Important white liquor parameters related to its composition and properties are given in Table 2. 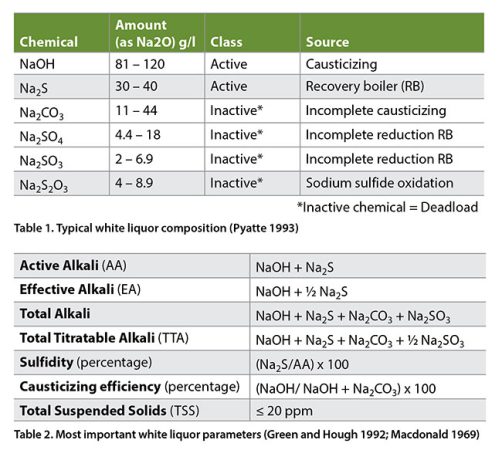 Deadload origins: How, why and when does it happens?


The white liquor active chemicals (NaOH + Na2S) react during pulping and then are washed out from the pulp into the black liquor, later sent to the evaporators and finally to the recovery boiler. The original chemicals going into the digester are recovered in the 97 to 98 percent range. Most of the sodium sulfate (Na2SO4) is reduced to sodium sulfide (Na2S) in the recovery boiler at reduction efficiencies around 90 to 94 percent and the sodium carbonate (Na2CO3) is converted to NaOH in the causticizers with recausticizing efficiencies in the range 80 to 84 percent (Tran and Vakkilainnen, 2016). See equations 1 and 2.

Effects of deadload and scaling deposits


It is evident that high levels of deadload negatively affect the functioning of some equipment, pipelines and pumps with process and economical consequences. The most common effects of deadload in a kraft mill are increased energy usage, greater chemical losses, scaling deposits reducing equipment capacity, downtime for cleaning operations, and lost production, among others.

Scaling takes place almost everywhere in a kraft mill, for example, in digester heaters and evaporators (Duggirala 1994), bleach plants (Shevchenko and Duggirala 2009), dissolving tanks, green and white liquor lines, slaker and causticizers. Removing most scaling deposits is a very expensive cleaning operation. Mills have the following options to consider – hydro-blasting; wood chip leaching treatment at pH 2-3; ion complexing with EDTA or DTPA; acid cleaning; and deactivation of black liquor. The most common scaling deposits in a kraft pulp mill are given in Table 3 (Sithole 2002). 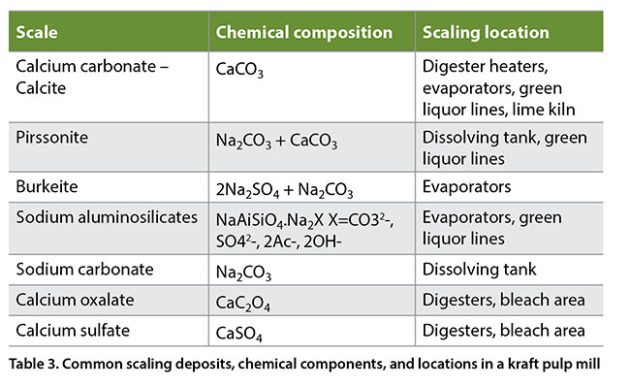 
Here are some recommendations to improve causticizing operations and to minimize scaling deposits in the equipment.

Optimization of the causticizing process can be accomplished by using the appropriate online control strategy that should include at least a green liquor TTA-control and a white liquor causticizing efficiency-control (Zuver 2021). 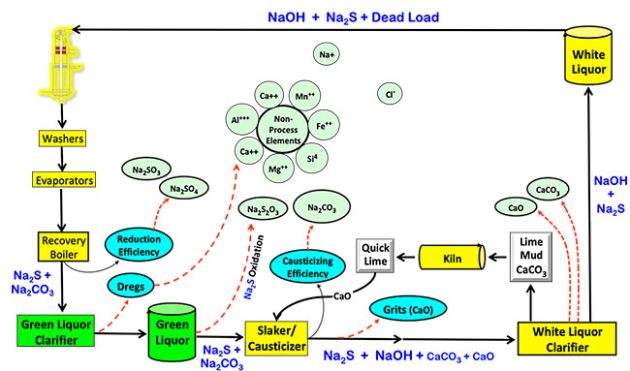 Figure 2. Sources of deadload in the kraft recovery cycle 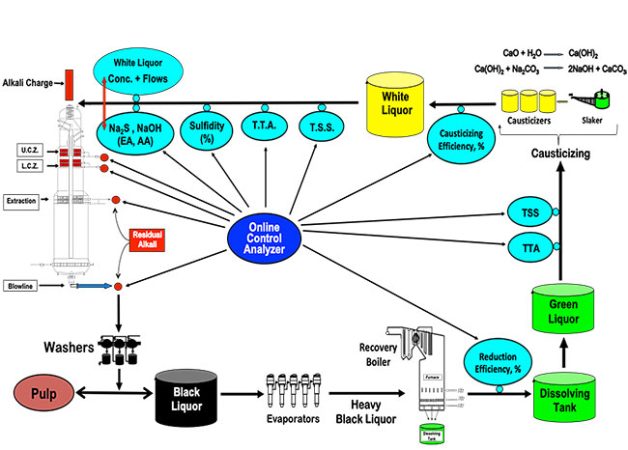 
Most kraft mills working at 40 percent or 60 percent over the manufacturer design must properly adjust new pulping parameters that include two very important ones: cooking temperatures and/or cooking chemicals. Of these two options, increasing white liquor requirements seems to be more difficult to satisfy, as we need to consider bigger volumes and high-quality cooking chemicals. The most evident effects on the equipment are the reduction of the retention time of most stages in the causticizing plant due to higher production rates that equates in higher liquor flows, higher amount of deadload due to lower efficiencies and consequently lower white liquor quality.

Leaving all the above parameters to be controlled by the operators is risky and an automatic online control system is necessary (Trung and Allison 2015). Online measurements are available for important determinations in several areas of the recovery and causticizing areas that can guarantee the production of excellent white liquor quality. Online analyzers can determine sodium hydroxide (NaOH), sodium sulfide (Na2S), sodium carbonate (Na2CO3) and report active alkali (AA), effective alkali (EA), total titratable alkali (TTA), causticizing efficiency (CE percentage), and sulfidity (S percentage).

A typical online causticizing application can include five points for sampling – green liquor after dissolving tank; before slaker; top of slaker; causticizing vessels; and white liquor line to digester (Valmet 2015). Laboratory analysis requires manual sampling every four hours while online analysis can give results every six to eight minutes. An ideal online control system might be the one shown in Figure 3.

Modern white liquor plants must generate a high and consistent quality of white liquor in order to produce an optimal pulp quality and to avoid fluctuations/disturbances in the digester. PPC