News
The Definition of a Safety Professional 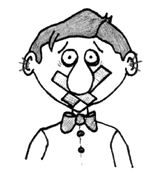 Sandwiched tightly between the Top Brass and the teaming masses, sits a wild-eyed individual, madly singing a safety tune. He’s the most misunderstood, maligned and unsung person in all the world of b…

Sandwiched tightly between the Top Brass and the teaming masses, sits a wild-eyed individual, madly singing a safety tune. He’s the most misunderstood, maligned and unsung person in all the world of business. He’s the proverbial “SAFETY PROFESSIONAL”.

This fellow’s a little bit from all stratas….but a member of none. To the employee or worker, he’s a tool of management. To management, he’s just another employee.

He finds his job interesting. He speaks for management from the “Ivory Tower” and then runs out to the Production Area, Warehouse or Work Site to hear how it sounds. He must keep his head in the brass’ boardroom and his feet in the muck…. a difficult position to keep from falling on his butt.

He has the curiosity of a cat…. the tenacity of a mother-in-law…the determination of a taxi driver…the nervous system of a race car driver…the digestive capacity of a goat…the simplicity of a jackass…the diplomacy of a wayward husband…the hide of a rhinoceros…the speed of a rocket and the good humor of an idiot.

He has the busiest, shrewdest, plottingest, worryingest, most thoroughly-washed brain of any human. His mail basket is always full, his desk is a constant mess and his calendar looks like cave drawings. Nobody has been given the run-around as often, has been passed so many bucks, is left holding so many bags, and has cut his way through so much red tape.

The safety professional keeps the coffee plantations, aspirin plants, liquor distilleries and the midnight oil companies in business. He must tread lightly over mountains of eggs, knowing where to tread and, more importantly, when and where NOT to tread. You’ll find him everywhere…shouting loudly over the din of a bunch of roaring engines, whispering softly in the hallowed precincts of thick-carpeted offices.

Whenever there is an accident, the safety professional is often called in to explain why and how it happened. He’s expected to pull rabbits out of non-existent hats; when the job is thankless, he gets it. He must engender interests in good housekeeping to people who live in garage sale clutter; promote wider responsibility to people who have a narrow focus; preach safety to people who think they don’t need it. He must listen to the phrase “that’s the way we’ve always done it” until he vomits.

Despite all the careful planning he is usually found dangling on a deadline. He’s the original cat on the hot tin roof: in the middle of a muddle and, of course, late. The master of understatement, he must make fire protection sound as essential as religion and an accident cost sound like the national debt.

He’s suppose to be a “specialist” who can breath new life into committees and meetings, leadership into management, cooperation into supervisory personnel and responsibility into employees/workers. He must inspire without propaganda and propagandize without being obvious. He parks his 1980’s jalopy between the boss’ new Mercedes and the janitor’s SUV. When he’s clever, it goes unnoticed but when he stubs his toe, the world is there to see and mock it.

To him a headache is normal; he’d have ulcers if he could afford them. He has more critics than Harry Truman. He meets more people who think they know more about safety than the company has conveyor hooks.

He can never be right. When he simplifies, he’s pandering. When he gets a little technical, he’s over their head. Half the people wonder what he does. The other half know what he does but think he’s doing it wrong. When an idea turns out lousy and after the blame has been thoroughly kicked between the employee/worker, foreman and supervisor, it winds up in his lap.

More people bend his ear than anybody else’s. Everybody thinks he always has time to stop and listen to a joke, hear a gripe, attend a meeting and/or serve on a committee. He does and winds up taking most of his work home.

He has no peer in the realm of praise, propaganda and procrastination. He knows he’s right; only the world thinks he’s wrong. If he has an idea, it was stolen. However, a stolen idea is research! Where else do you think the background material for this sad tale of woe about a Safety Professional originated?