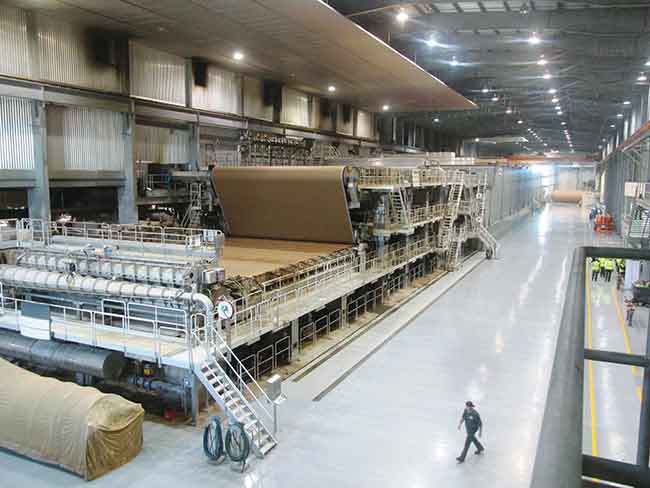 The Valmet paper machine has a trim of 8.33 m. Starting from scratch to build a new paper mill gave Cascades a clean slate to establish new technologies and new procedures.

What happens when you have a focused team and a high-tech machine? Best-in-class products.

The company’s Greenpac mill in Niagara Falls, N.Y., maintains Cascades’ emphasis on sustainability and minimal consumption of resources, but it veers from the industry’s traditional management and operations model in a few ways.

Greenpac has a leading-edge paper machine, which immediately sets it apart from most North American mills, but the mill also stands out for outsourcing non-core functions; hiring of fast learners who embrace technology; automating the finished goods warehouse; and inviting customers to be part-owners of the new facility.

At the official inauguration of Cascades’ Greenpac mill in September 2015, company executives spoke of the determination and teamwork that carried this dream of building a state-of-the-art containerboard mill through to reality.

The idea to build a new mill took root at Norampac, a division of Cascades, in 2005. Three years later, the economy was in meltdown. “It took courage and vision to hold onto the dream,” said Cascades president and CEO Mario Plourde. “It was risky to build a mill of this scale in the wake of an economic crisis.”

Greenpac Mill LLC was created by Cascades in partnership with the Caisse de dépôt et placement du Québec, Jamestown Container and Containerboard Partners. The new mill produced its first roll in July 2013, after 22 months of construction.

Considered the most advanced facility of its kind in North America, Greenpac manufactures a lightweight linerboard, made with 100% recycled fibres, on a single Valmet machine with a trim of 8.33 metres. Built and operated by Norampac, the Greenpac mill has an annual production capacity of 489,880 tonnes (540,000 short tons). It is the largest 100 per cent recycled lightweight linerboard facility in North America.

“Greenpac’s success since launching operations has confirmed that we made the right choice by investing in modern equipment and technologies that enable us to offer superior-quality products,” says Charles Malo, chief operating officer of Norampac.

Both the stock prep area and the paper machine are highly automated. The warehouse is completely automated; overhead cranes store the finished rolls, and later place them onto conveyors in the order in which they need to be loaded onto trucks or railcars.

Jukka Tiitinen, president of Valmet’s services buisness line, recalls that in 2010, when his company signed the deal with Cascades to supply the paper machine, the company had already done a market study, secured their partners and lined up customers.

The Greenpac mill “is the best in class in North America for sure, and among the best globally,” says Tiitinen.

Advanced technology makes a unique product
By combining the latest paper production technologies, Greenpac has developed a high-performance recycled linerboard – Greenpac XP – that is said to have superior strength and unparalleled print quality while maintaining a lower basis weight than traditional linerboards. On top of that, Cascades says that Greenpac XP is a more economical option for customers as its innovative manufacturing process requires less total fiber in a completed box.

Although 100 per cent of the mill’s output is lightweight grades, about 65 per cent of its current production is the Greenpac XP grade. The mill also manufactures the first 26-lb HP ((high performance) product on the market.

“Greenpac offers high-performance and innovative products that will enable us to better fulfill the needs of our customers, with one of the lowest costs in the industry,” states Plourde.

Greenpac XP is said to be stronger than comparable products. One key characteristic is that starch is added to both sides of sheet at the size press, so the board needs less fibre and achieves higher strength.

Tiitinen describes the business implications of Greenpac’s advanced technology: “With the sizer, they have been able to optimize the package properties, so they can sell on features, not on basis weight.”

On the subject of throughput, Hewitt notes that one shift unloaded 64 trailers in 12 hours. The 24-hour record for unloading is 108 trucks.

The mill only stores about 3175 tonnes (3500 short tons) of fibre on site, so “we can’t have a hiccup in the logistics train,” says Hewitt.

With respect to energy efficiency and the use of water, the Greenpac mill is an industry leader thanks to the automation of numerous operations, a state-of-the-art water treatment system, high-performance drying equipment and the re-use of process water. The mill also uses steam from a nearby waste-to-energy facility.

The Valmet paper machine is equipped with two fourdriniers, an online size press and an online calender. The WinDrum winder has a speed of 8000 ft./min. “From the winder, everything goes to the warehouse without a human touch,” explains Plourde. “Rolls go to the loading dock on conveyors, and from there technicians load them onto a truck.”

The paper machine can make a 70-ton jumbo roll in about one hour. It takes a total of about six hours to make a finished product, from putting a bale of recovered paper into the pulper to moving the finished roll into the warehouse. The warehouse, because it is automated with an overhead crane, operates in the dark and doesn’t need room for aisles between the stacked rolls.

“We look for a high level of automation understanding [in our employees],” he adds.

Choosing the right people pays off
Hewitt employs a team-based, participative approach to management. He says participation on committees is currently more than 70 per cent.

When staffing the new facility, Cascades looked for specific types of people, but did not seek out those with previous papermaking experience. Cascades CEO Mario Plourde explains that they were looking for people who could learn quickly and embrace new technology. The company also considered decision-making skills, and the interview process included questions about real-life situations.

Greenpac’s management also chose to outsource maintenance and logistics functions to Valmet and Ryder, respectively, “so we can stay focused on safe, quality production,” says Hewitt.

The maintenance contract is the first of this scale in North America. It’s a multi-year agreement, backed by a strong team of Valmet employees. Tiitinen says the maintenance team of about 40 people includes managers from Valmet and other maintenance staff hired locally. There are maintenance people on-site at the mill 24/7. Every six weeks, the facility shuts down for 18 hours for preventative maintenance.

“This mill brings Cascades to a new level,” says Mario Plourde. “It was a huge challenge because we had never built a plant of this size before.”

Marc-André Dépin, president and CEO of Norampac, was one of the driving forces behind the creation of Greenpac. In a statement delivered at the inauguration, he commented: “Ten years ago, we started dreaming of this project. We met our share of challenges over the years. Together, as a team, we made our dream a reality.

“I want to say a special thank you to Alain Lemaire who believed in us.”

Now, in 2015, the team which did not start out as papermakers is delivering a unique containerboard product using a technologically advanced, environmentally-conscious process. That’s the Greenpac difference.