News
The Little Mill That Could 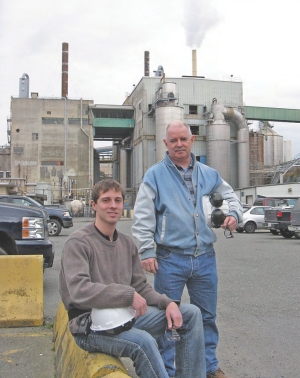 In his 32 years at the Harmac pulp and paper mill outside Nanaimo, B. C., Doug Narver has seen a procession of owners come and go — from MacMillan-Bloedel in the 1980s to re-structured Mac-Blo entity…

In his 32 years at the Harmac pulp and paper mill outside Nanaimo, B. C., Doug Narver has seen a procession of owners come and go — from MacMillan-Bloedel in the 1980s to re-structured Mac-Blo entity Harmac Pacific in the 1990s to the decade-long tenure of Pope & Talbot that ended in bankruptcy last spring.

But he’s never felt better about coming to work than he does under the current ownership group. Of course that’s a somewhat biased opinion, since he’s one of the shareholders.

“This is the fourth owner I’ve been through and it’s definitely the best one so far,” Narver says. “The whole concept of employee ownership is something I bought into figuratively and literally.”

Narver, Harmac’s No. 3 machine operator, is one of more than 200 longtime employees who invested $25,000 apiece in the operation as part of a bid to save the mill after it went into receivership last May.

In a move that raised eyebrows across the industry, the displaced workers secured backing from three B. C.-based investment partners and purchased the failed operation last summer for $13.2 million.

Analysts scoffed at the proposal, suggesting the aging pulp factory needed $100 million in upgrades and predicting the province would get stuck with an estimated $50-million in clean-up costs in the event of a permanent closure.

Yet in less than four months — lightning speed for receivership proceedings — the employee group managed to convince the courts its proposal was the best available option for both Pope & Talbot’s creditors and the community.

In October, just as the U. S. economy began to implode, Harmac Pacific reopened with 230 workers churning out between 700 and 800 tonnes of ready-to-ship pulp per day from one of the plant’s three production lines.

Six months into the worst economic crisis in living memory, the worker-owned mill continues to defy the skeptics.

“I didn’t think they’d make it, but it’s not just me. Everybody’s surprised,” says Paul Quinn, a forestry analyst with RBC Capital Markets in Vancouver.

“People are astounded that the guys who are running it now can run it successfully in these conditions.”

Former union treasurer Bob Smiley, now a director on the Harmac board, says the proposal contained two key elements — a five-year fibre supply agreement with Western Forest Products and a long-term marketing deal under which Coastal Pulp and Paper is obligated to buy 100% of Harmac’s product.

B. C. Supreme Court Justice Donald Brenner, who approved the sale in August, was swayed by the group’s intimate knowledge of the facility, sound business plan, and commitment to saving local jobs.

“The receiver actually didn’t support our bid but Justice Brenner could see the logic of what we were proposing. We knew the mill, we knew the age of the assets, we knew that Pope & Talbot had invested about $300 million in upgrades,” says Smiley.

“We made sure the WFP fibre supply was part of any agreement with the receiver.”

The driving force behind the new operation is Levi Sampson, son of Ed Sampson, founder Niko Resources, a Calgarybased oil and gas firm with $1.3 billion in assets.

At age 28, Sampson is barely half Smiley’s age and has no prior experience in the forest industry. On the other hand, he brings a fresh approach with no sense of allegiance to past practices, and a determination to do things differently in the future.

“There’s no way we would have gotten involved in this if there wasn’t change,” Sampson says.

“Our attitude is more entrepreneurial. We want to use the assets from this mill in a way that makes sense in this market.”

Future plans include a wood-chipping facility that will save on the cost of paying outside companies to chip Harmac’s waste wood for re-use. With only 300 of Harmac’s 1,200 acres occupied by the mill, the company is planning to lease some of its excess industrial land to other companies. There are also discussions underway with the City of Nanaimo about using Harmac’s waste treatment systems to treat municipal sewage.

Sitting in the company’s modest third-floor boardroom, Smiley and Sampson reel off a list of advantages that have allowed the re-born mill to compete.

Harmac has no outside debt to burden it during the credit crunch.

It has a guarantee from its worker-owners that there will be no lockouts or strikes for 11 years.

Since reopening in October, the company has reduced its production costs by about $100 a tonne.

With North American pulp prices down from about $885 a tonne last August to $650 a tonne at the end of March, Sampson declines to reveal Harmac’s current production cost, but insists that company’s new efficiencies are paying off.

“We’re tremendously more competitive now,” he says. “It’s going to be the companies that make it through the downturn that prosper in the end. We’re at an advantage because we’ve been hurting far less than everyone else.”

Smiley says the scaled-down size of the company, coupled with on-site ownership, allows Harmac a flexibility it never had under larger corporate structures.

“Pope & Talbot’s office was in Portland, Ore., and I think they lost touch with what could be done and should be done,” Smiley says. “Now all of the decisions are made right here in this mill, in the best interests of Harmac.”

Worker-owners now have a direct line of communication with management and a vested interest in contributing cost-saving ideas, he adds

“The guys in the shop have an ability to affect results on a daily basis and that really adds a lot,” Smiley says.

Machine operator Doug Narver says the new contract promotes efficiency by allowing workers to perform any job for which they are qualified.

“Now when a machine goes down there are guys down here right away helping out,” Narver says. “They know they can’t afford a shutdown.”

Even more important, he adds, there’s been a fundamental change in attitude.

“There used to be a lot of negative energy in this place. The guys who chose not to come back were constantly telling us we’d never survive,” Narver said. “It’s probably good they didn’t come back. Everybody that’s here now was willing to pay to be here.”

Still, as the industry casualties continue to pile up, the long-term survival of Harmac’s worker-owned mill is far from ensured.

By the end of February, Catalyst had eliminated more than half of the 300 jobs at its Powell River plant on the mainland, laid off two-thirds of the 750 workers at its Crofton Mill on Vancouver Island, and shut down its Elk Falls mill in Campbell River, eliminating about 350 jobs.

Despite some of the worst industry conditions he’s ever seen, Quinn admits Harmac’s low overhead, flexible management structure, and motivated work force may allow it to survive the downturn.

“If you can get everyone moving in the same direction, it’s a pretty powerful thing and that’s what I think Harmac has going for it right now,” he says.

There’s already talk of bringing back another 40 workers to start up Harmac’s second production line and Sampson maintains that Harmac is well-positioned to capitalize when the markets begin to improve.

“We’ve got a great model here,” he says. “It’s just that the real world hasn’t co-operated with us yet. But it will.”