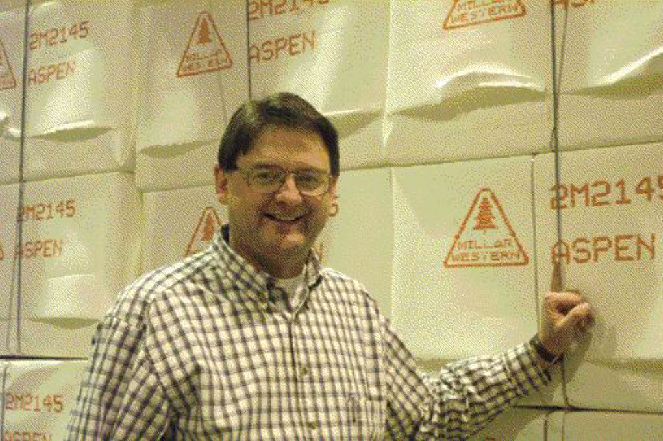 CONTINUING OUR MONTHLY SERIES THAT COMMEMORATES PULP AND PAPER CANADA’S 100TH ANNIVERSARY, WE PROUDLY SALUTE MILL MANAGERS FROM ACROSS THE NATION WHO HAVE HAD A SIGNIFICANT IMPACT ON BOTH THEIR WORKPL…

CONTINUING OUR MONTHLY SERIES THAT COMMEMORATES PULP AND PAPER CANADA’S 100TH ANNIVERSARY, WE PROUDLY SALUTE MILL MANAGERS FROM ACROSS THE NATION WHO HAVE HAD A SIGNIFICANT IMPACT ON BOTH THEIR WORKPLACE AND THE INDUSTRY AS A WHOLE. THIS MONTH WE TRAVEL TO ALBERTA, WHERE MILLAR WESTERN’S WHITECOURT BCTMP FACILITY HAS SET NEW STANDARDS IN WORKPLACE SAFETY, PRODUCT QUALITY, COST EFFICIENCY, ENVIRONMENTAL RESPONSIBILITY AND COLLABORATIVE MANAGEMENT. BOB LESLIE IS MILL MANAGER FOR A GLOBAL COMPETITOR THAT PRIDES ITSELF ON OPERATING WITH THE SPIRIT OF A SMALL BUSINESS.

Bob Leslie has been the mill manager of Millar Western’s Whitecourt, Alberta, facility for the past four years, but he has been with the company for 16 years, and his expertise in producing bleached chemi-thermomechanical pulp (BCTMP) spans more than three decades. In 1988, when Millar Western opened what was then its first pulp facility and the world’s most technologically advanced BCTMP mill, Leslie was there. And, when Millar Western launched its second BCTMP operation in 1992 — the world’s first successful zero-effluent market pulp mill — Bob was a key member of the design, start-up and operating teams.

During his career, Bob has been part of some tremendous advances in the BCTMP sector. Millar Western’s focus on grade development, quality assurance and technical support have helped pave major expansions in the marketplace for high-yield pulps. Once used in only limited applications, BCTMP grades are now used widely in printing and writing papers, specialty papers and paperboard. “Our product quality starts right at the design of our mills,” says Leslie, “but it owes an awful lot to the hard work and high standards of our employees. I’m amazed at the awareness the people on our mill floor have of the role they each play in meeting customer needs and maintaining our market position.”

Growing up in Prince George, British Columbia, home to three pulp mills, Leslie’s passion for the industry developed early. The passion is evident as he takes his daily walk through the mill. “There is not an area of this mill I don’t enjoy — every part of it energizes me. When I walk around this facility,” says Leslie, “I see employee pride reflected in everything I see around me. The cleanliness of our mill, the commitment to good housekeeping and maintenance is just so obvious. And that pride shows up in everything from our safety performance to the product that leaves the mill gate.”

Millar Western’s collaborative management style and the connection he feels to people throughout the mill are of great significance to Leslie. He sees the role of mill manager as that of just one person in a team, and speaks on the subject with strong conviction. In fact, he agreed to be interviewed for this profile only if its title could be amended this month to read “The People Behind the Mill”. A Ken Iverson quote hanging in Leslie’s office reminds him each day that, “employees, not managers, are the true engines of progress,” and that his job as manager is “creating an environment in which employees can stretch for higher and higher levels of performance.” Leslie told me that he strives to build that environment, and that one of his most important goals personally is to maintain the trust of the employees at the mill.

Bob Nicol, manager of engineering and maintenance services, has known Leslie for the past ten years and applauds his team-oriented approach. Even during challenging times, Nicol says, “Bob is there for employees. He always has a positive outlook.” Mac Millar, president and CEO of the company, says the company’s success over the years has owed much to attracting the right people, giving them the tools they need to reach objectives, and then getting out of their way. “Smart, energetic people like Bob have brought us to where we are, and are building this company’s future,” says Millar. Joe Costantino, senior vice president of operations, refers to Leslie as “about six feet, four inches of infectious enthusiasm.” His leadership in establishing a program of continuous improvement at the mill, says Costantino, has helped the people at Whitecourt Pulp achieve outstanding results in safety, productivity, quality, cost reduction and responsible environmental management.

Maintaining the financial strength to control its own destiny.

Pursuing intelligent growth by building on its core competencies and assets

Striving for the best performance in the industry, in a safe and environmentally responsible manner, without compromising long-term value for short-term gain

Conducting business in a manner consistent with its values of integrity, honesty, trust and respect

Millar Western is a company that not only remembers its past, but celebrates it as the foundation of its business identity. A leader in the world marketplace for high-yield pulp, it retains the spirit of a small business, one that traces its roots to the blacksmith shop opened North Battleford, Saskatchewan, in 1906 by its founder, J.W. Millar. Since that beginning, the company has grown to become one of Western Canada’s largest privately-owned forest businesses, with more than 900 employees, production capacity of 580,000 tonnes of pulp and 300 million board feet of lumber per year, and global reach. All the while, Millar Western has worked to retain the best qualities of a small, family-run operation. “Our owners run this business hands-on,” says Leslie. “They know these facilities inside out, and know the people operating them by name.”

At the start of the 20th Century, J.W. Millar headed west with a dream. The decades that followed have been filled with challenges and achievement for the business he founded. As it enters the 21st Century, the dedicated efforts of people like Bob Leslie will ensure the continued success of Millar Western.P&PC

Your comments are welcomed at zsoltp@pulpandpapercanada.com

Number of gradesOver 20 grades of hardwood, softwood and blended pulp

During the Second World War the facility served as a POW camp for captured German and Japanese soldiers. Canada was at war and the remoteness of the paper mill offered an ideal location for the incarceration of the enemy. We will explore the past, the present and the future of Espanola.