Heat and CO2 from the Resolute pulp mill will power one of the most efficient greenhouses of the country, the Toundra Greenhouse 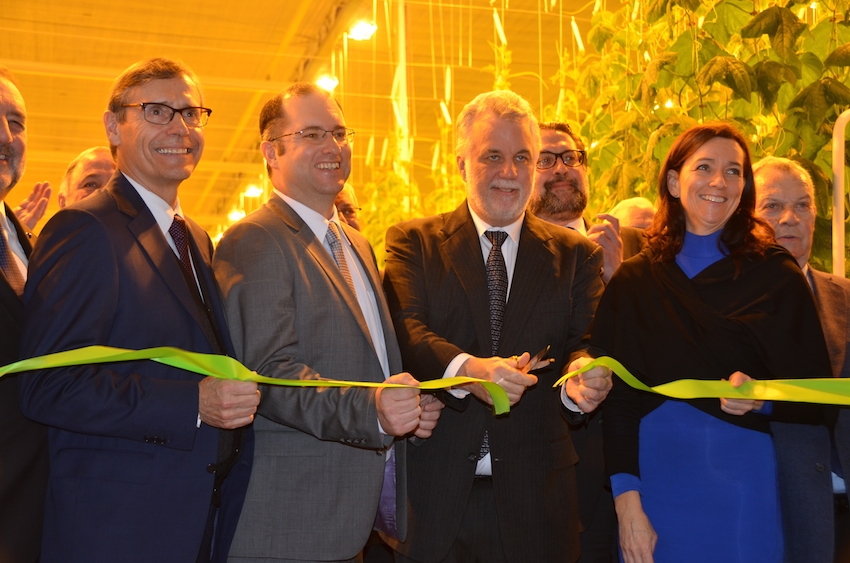 May 8, 2017 – 48.65 ° North. It’s -10 C outside and a foot of snow already covers the ground. An intense orange light has appeared in the Northern Lac Saint-Jean skies just over a month ago showing some signs of industrial development. But forget about any forestry or aluminum development like the region is used to. This time around, it’s all about cucumbers.

And it’s big — a $38 million greenhouse project spreading over 8.5 hectares of land. Inside, state-of-the art Dutch technology produces amazing results: 360 cucumbers growing per square metre, much more than the forecasted 275 per square metre.

At the greenhouse’s inauguration on Dec. 14, 2016, everybody was celebrating the creation of 200 new jobs in this rural area. Local investors, Eric Dubé, Caroline and Bertrand Fradette, are particularly thankful to Richard Garneau, CEO of Resolute Forest Products, who not only believed in the project, but also convinced his board to invest in the project to become a 40 per cent shareholder of Toundra Greenhouse.

Quebec Premier Philippe Couillard, who is also the local MP, was also a key player in the project.

“The government officials never saw a project like that before and all doors were closed at first, even when I was asking,” said Dubé. “We need to learn lessons and use this story as a case study to be more open to innovation, because we have great opportunities to innovate in rural areas.”

Indeed, the project had to go through many phases and countless problems before the first cucumber was harvested in November.

A long-lasting project
When I moved to St-Félicien, Que. in 2008, the Agrothermic Park dreamt by the local mayor, Gilles Potvin, was already a latent project looking for a promoter.

Potvin started dreaming about this in 1989 when he was the town’s industrial commissioner. Back then, wood residues were a problem and people were looking for ways to use them to create value.

That’s when a co-generation plant idea came up. The plan: turn the wood residues into power. A good but kind of wasteful idea when we know that 80 per cent of the power generated is lost in the form of heat.

Potvin then came up with the idea of an Agrothermic Park. The extra heat could be used as an industrial economic development lever to develop a 30-hectare greenhouse hub and a 20-hectare industrial area for forest products.

At first, the project looked perfect, but as time went by, wood residues gained value and became scarce as more projects arose. From $5/ton when the plant was built in 2000, the wood residue price reached $18/ton in 2006. And since the co-generation plant negotiated a 25-year deal with Hydro-Québec at 6 cents per kWh, the plant’s future was shaken up.

In 2009, St-Félicien received a $5-million subvention to build the heat-transfer infrastructure from the co-generation plant to a 28-hectare field they bought across the street.

Many promoters evaluated the project but nothing serious came out of it. Who would make a big greenhouse investment that relies on an uncertain energy source?

But everything changed when a new guy in town, Dubé — a Royal Bank investor from Montreal — moved to the region when the bank was heavily investing in agricultural lands. When accused of land grabbing, the bank stopped its plan, but Dubé stayed in the region to invest in a potato business and other agricultural projects.

When he met the mayor, he learned about the Agrothermic Park, a big and ambitious project he liked right away. He then met local investors, Bertrand and Caroline Fradette, who owned a lumber mill back in the 1970s, who also had interest.

In 2015, the co-generation plant was for sale and they prepared to make an offer, but Enel Renewable Energy sold their 21-megawatt power plant to Greenleaf Power.

To find a reliable source of thermal energy they decided to look away from the co-generation plant. Who was the other industrial partner with heat available nearby? The answer: Resolute Forest Products, with its pulp mill 15 kilometres away from the downtown area.

When Dubé asked for a meeting with Garneau, Resolute’s CEO, in February 2014, he was offered only/just 10 minutes for his pitch.

“We ended up spending an hour together. This was the beginning of a successful relationship,” Dubé recalled at the greenhouse’s opening ceremony.

Stunned by the proposal to make a business partnership to grow cucumbers, Garneau readily asked, “Is there a market?” because he needed this kind of information to convince the Resolute board to jump in. And Dubé provided it quickly. By July, he came back with a promise from grocery retailer Sobey’s to buy all their cucumber needs after meeting with Yvan Ouellet, the company’s procurement and merchandizing vice-president.

From then on, Resolute agreed to be a 40 per cent partner in the project and to allocate a field close to the pulp mill, but Garneau stated his conditions. Local partners had to come up with a good business plan and use an efficient and recognized technology. The municipality also needed to be a partner and the workforce should be found locally.

“We believed in this bold and crazy project. And today, cucumbers produced here can be found in 450 points of sale in the province,” Dubé said.

Sobey’s commitment helped find the funds, but the hardships were not over. For example, the agricultural zoning had to be changed. Local acceptability was challenged when the mayor proposed to invest millions of dollars in the water-diverting infrastructure. Construction workers also protested when Dutch workers came to build the greenhouses.

But in the end, the project was completed according to the planned schedule and budget. This is in part due to the world-renowned greenhouse-making experience of Kubo and Stolze, the Dutch consortium in the venture, which made projects in cold areas like Russia, Finland and Alberta. AAB, a Dutch consulting company, also supervised all stages of the projects.

“We are able to provide the world’s best technology because we have so much experience and knowledge,” notes Peter van der Kraan, Kubo’s financial director. “We can provide the highest productivity at the lowest cost. We can also realize a project like this one very fast.”

Kubo — which has also worked on other projects across Canada — received a $10-million contract with Toundra Greenhouse.

In the greenhouses, an integrated computer system controls more than 700 environmental parameters, ranging from lighting, humidity, fertilizers, and CO2 level controls. To improve plant growth, extra CO2, coming from the natural gas combustion is injected in the greenhouse, increasing the concentrations from 340 ppm to 800 ppm. But that’s not all, since CO2 solutions, a carbon capture specialized business, will build its first commercial $7.4-million project to feed the greenhouses with 30 tons of CO2 per day captured from the pulp mill – the equivalent of 2,300 cars off the road. To do so, CO2 Solutions, who already has a 10-ton per day demonstration unit in function, uses an enzyme-based proven technology, says Evan Price, the company’s president and CEO. The project will be completed in 2018.

Another particular aspect in the greenhouse is that the plants grow off ground on a stone wool artificial substrate, used primarily as a physical support. Those plants, which receive 20 hours/day of lighting, are irrigated and fertilized simultaneously — a process called fertigation — and all elements not absorbed are recycled.

Likewise, 98 per cent of the water is recuperated from precipitations stocked in basins or recycled through the recirculation system. Toundra Greenhouse does not use pesticides and prefers to do integrated pest management. All of this is just the first phase of the $100 million project covering 34 hectares planned over the next years.

More good news for them: Subway just signed a contract to supply all 600 of Quebec’s and 250 of Eastern Canada’s restaurants with Toundra’s cucumbers. Another step to increase the proportion of locally made cucumbers on the market, previously at five per cent before the Toundra project.

For Potvin, this project exemplifies the birth of a new ecological industrial era, where waste can become huge opportunities for others.

This feature was previously published by Canadian Biomass, and also appeared in the Spring 2017 issue of Pulp & Paper Canada.
Print this page