Admitting that he spoke straight from his heart, Joseph Kruger II described Project Relance 2002 and welcomed the many guests to the official ceremony celebrating its successful inauguration. As chairman of the board and CEO, Kruger thanked the ma... 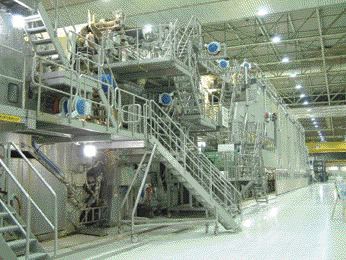 Admitting that he spoke straight from his heart, Joseph Kruger II described Project Relance 2002 and welcomed the many guests to the official ceremony celebrating its successful inauguration. As chairman of the board and CEO, Kruger thanked the many participants in the Kruger-Wayagamack project, including the customers, the Kruger employees, the government and the financial institutions that made this project possible.

“It’s a great turnaround,” he said. “It was just in time for Kruger’s 100th anniversary,” he added, referring to the establishment of the Kruger business by the first Joseph Kruger in 1904 in Montreal.

On May 9, 2001, Kruger Inc. and SGF REXFOR acquired the Wayagamack mill from Abitibi-Consolidated with a view to modernizing it and turning it into a leading edge industrial complex. After the purchase, $7.5 million was invested to upgrade the quality of directory paper manufactured on PM3. Work on this project was completed during the summer of 2002.

A $2.1 million grant from the Emploi-Quebec department of the Quebec government allowed some 500 employees at the mill to update their skills in keeping with anticipated technological and organizational changes. It was also used to train the many new employees that Kruger planned to hire during the year.

Relance 2002 (meaning “fresh start”), as the most recent and largest project was called, was implemented with financial input from Investment Qubec in the form of a direct loan totalling $148 million. It created 175 new jobs, in addition to consolidating the mill’s existing 475 jobs. Globally, the project required more than one million hours of planning, engineering, construction and management, as well as 235,000 hours of professional training. More than 3,000 construction workers took part in the modernization program. Metso was the primary supplier. [ed. note: Please see Kruger Wayagamack gets a “fresh start” with Relance 2002, PPC, December 2002]

The project took three years to complete and 60% of the goods and services contracts were awarded to Qubec companies, including 25% to companies in the Mauricie region. “Without the financial participation of the SGF and the excellent work of the people who were involved in the mill’s revitalization, this major project would never have taken place,” said Kruger’s executive vice president and COO, Bernard Routhier.

This is the only entirely new coated production unit to be installed in North America in the past 15 years, and its start-up was an unprecedented success in the industry.