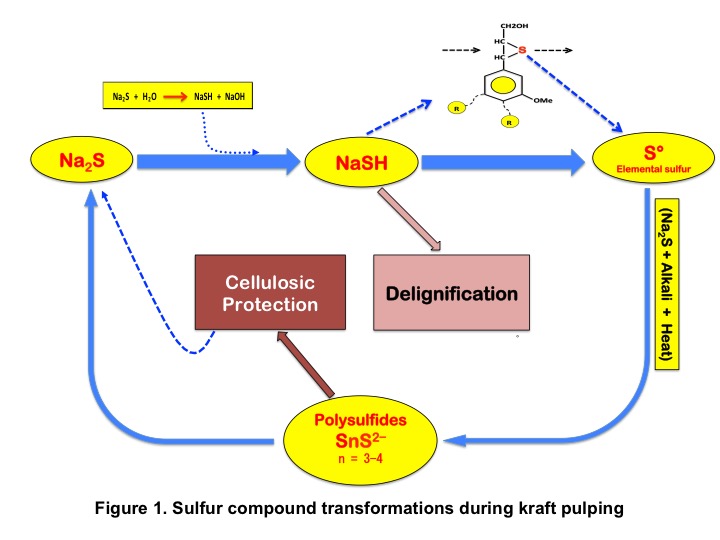 The story that most likely explain its origin goes back to the 1870s in a soda mill, where a chemical recovery plant operator made a mistake in the process of adding sodium carbonate (Na2CO3) for chemical losses, he added instead sodium sulfate (Na2SO4). The resulting pulp produced with this modification was found to be not only darker than the previous one (i.e., soda pulp) but also stronger. The German and Swedish translation for strength is kraft.

This innovation originated what is currently known as “kraft” or “sulfate” pulping process. The sulfate denomination is because of the addition of sodium sulfate (Na2SO4) in the chemical recovery plant that is also called “salt cake” and is used as a make-up to replace chemical losses.

Even though sodium sulfide (Na2S) is generated during the preparation of the kraft cooking liquor (i.e., by reducing the Na2SO4 to Na2S), this chemical does not participate directly in the delignification reactions. Sodium sulfide reacts with water (i.e., in the white liquor) and generates sodium hydrosulfide (NaSH) and sodium hydroxide (NaOH) as in equation 2. The ionized forms are given in equation 3 below.

The active chemicals during kraft pulping are sodium hydroxide (NaOH) and sodium hydrosulfide (NaSH) that degrade and dissolve lignin.

After this breakage, the sulfide ion forms an episulfide unit that subsequently releases elemental sulfur (S°) into the cooking liquor (Gierer 1985, Lindfors et al. 1987). This sulfur partly combines with hydrogen sulfide to form polysulfides that to some extent decomposes into hydrogen sulfide (Zhu 2013, Bränvall 2017). (See Figure 1 at top of page).

Polysulfides decompose at high temperatures (i.e., 170°C) to give sodium thiosulfate that represents part of the sulfur elimination from the cycle (Kubes 1980).

Definition and calculation of the sulfidity

In most mills, when the sulfidity drops, the normal reaction of the digester operator is to increase the alkali charge (EAW%) and/or the cooking temperature, but they do not inform the recausticizing operator of this white liquor sulfidity change (i.e., reduction).

Or the other way around, when the recausticizing operator finds a reduction on the white liquor sulfidity, they do not inform the digester operator immediately about this change so that the digester operator should get ready for the corresponding cooking adjustments. Of course, these variations can be resolved quickly and more efficiently (i.e., without human mistake) by using a computerized system to fix these variations using online analyzers.

When referring to the concept of kraft pulping selectivity, this indicates how much lignin is removed in comparison to the amount of the cellulosic material being degraded. The higher the amount of lignin removal, the better is the selectivity of the delignification process.

This selectivity depends mainly on the levels of sodium sulfide in the white liquor that it is used to calculate the corresponding white liquor sulfidities (see equation 4). The selectivity during pulping means the ability to remove lignin from wood without affecting the properties of the carbohydrate components of the fibrous material (Brogdon and Dimmel, 1997).

Sulfidity plays an important role on the rate of delignification and the net effect is the breakage of the β-O-4 bonds of lignin as well as methyl groups, the latter leading to the formation of mercaptans that are responsible for the characteristic odours of kraft mills. The ether β-O-4 linkages are easily broken while the carbon-carbon bonds are more difficult to break and represent a minor portion of lignin fragmentation (Gierer 1985).

Sulfidity and the four principles of modified continuous cooking

Pulp research in the 1980s was focused on finding a selective lignin removal during pulping called extended delignification to minimize the formation of chlorinated aromatic compounds (i.e., toxic dioxins, etc.) during bleaching.

This work conducted to modifications of the kraft process, called “modified continuous cooking” or “modified kraft cooking,” was based on four principles developed at the Royal Institute of Technology and the Swedish Pulp and Paper Research Institute. These principles include: the hydroxide ion concentration [HO−] should be leveled out, the hydrogen sulfide ion concentration [HS−] should be as high as possible throughout the cook, the concentration of dissolved lignin should be as low as possible and the temperature should be low during the whole cook (Annergren 2014).

Results of previous research showed that extending the delignification to lower kappa numbers led to lower pulp yield and pulp of inferior quality (Sjoblom 1983). Current benefits of higher selectivity obtained by modified continuous cooking are not used for extending cooking but for finishing the kraft cooking process at kappa numbers between 27 to 32 for bleachable softwood pulp and 15 to 20 for hardwood pulp.

Sulfidity does not increase pulp yield. The hydrogen sulfide (HS−) ion improves greatly the selectivity and the delignification rate during kraft pulping, but do not have any direct effect on protecting the cellulosic material (i.e., chemically increasing pulp yield).

Due to its profound effect on the delignification rate, the HS− ions leads to shorter cooking times to get a target kappa number that favours to less exposure time for cellulosic degradation reactions. This shorter cooking time equates to less exposure time to drastic alkali and/or cooking temperatures and consequently increasing pulp yield. Furthermore, the lower degradation of the fibres can be perceived as better pulp strength.

Sulfidity does not increase pulp yield. The hydrogen sulfide (HS−) ion improves greatly the selectivity and the delignification rate during kraft pulping, but do not have any direct effect on protecting the cellulosic material (i.e., chemically increasing pulp yield).

This partially explains the theory behind the usage of enzymes (i.e., xylanases) for delignification. In this particular case, xylanases do not work directly on the lignin removal but on the very selective degradation of xylan leaving the lignin more exposed to the attack of the bleaching chemicals. A true enzyme for delignification is a ligninase but at this moment there is not such an enzyme for industrial economical applications.

The best chemicals improving the delignification rate are HS− ions (i.e., sulfidity) and anthraquinone-AQ (i.e., very few mills are still using it). It is worth mentioning another digester additive such as polysulfides (PS) that do protect directly the cellulosic material and increase pulp yield. In terms of pulp yield, AQ and PS do increase pulp yield. 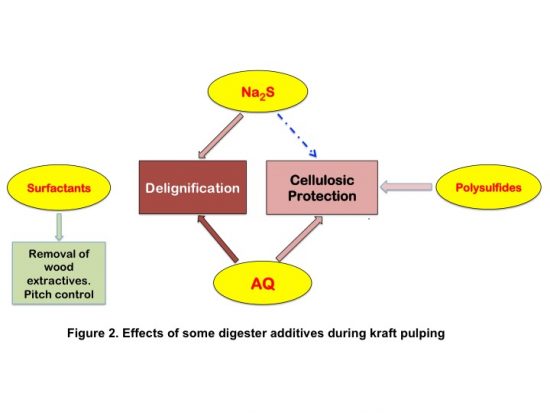 Liquors and chemicals in a kraft recovery cycle 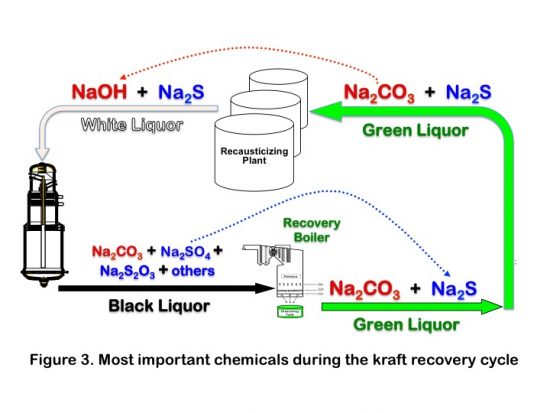 The great selectivity of the sulfidity is better observed at the beginning of the cooking stages especially during the bulk delignification (i.e., higher lignin removal) but it is less effective at the end of the cooking for removing the residual lignin. When trying to reach the lowest levels of residual lignin the best option is to increase the alkali concentration instead of increasing the hydrogen sulfide concentration (Brännvall 2017). Removal of the residual lignin (i.e., slow-reacting lignin) is a very complex operation that needs special attention.

The main objective of a kraft pulping process is to liberate the fibres in the wood by chemically degrading and dissolving lignin (i.e., ideally); however, other wood components (i.e., cellulose and hemicelluloses) are degraded at the same time and pulping conditions must be controlled in order to obtain high pulp yield and high pulp strength.

Even though, the delignification rate is reduced when approximately 95 per cent of the original lignin in wood has been removed; however, the rates of degradation and dissolution of the carbohydrates continues more or less unaffected (Bränvall 2017). Then the limitations for full delignification are determined by the amount of the slow-reacting residual lignin and by the degree of degradation of the cellulosic material.

The residual lignin is characterized as very slow-reacting polymer, with high content of guaiacyl-lignin units (i.e., resistant), with more complex lignin structure, with more carbon-carbon bonds and highly condensed. Condensation reactions lead to the formation of alkali-stable linkages, thereby increasing the molecular size of lignin fragments. At low residual alkali the fragmented lignin re-condenses and re-precipitates onto the pulp at the bottom of the digester. It is very difficult to remove this condensed lignin from the fibres (Gellerstedt 1984-b).

Sulfidity reduction during kraft pulping has been forced mainly because of environmental pressure and government regulations. Many original kraft mills located close or in the middle of a town have been required to lower or eliminate their odour emissions (i.e., total reduced sulfur – TRS). An additional and important reason for reducing the sulfidity is the advantage of reducing the recovery boiler corrosion.

A sulfur balance it is necessary in order to monitor the sulfur losses (i.e., air emissions) and their impact on the sulfidity of the white liquor and make-up chemical calculations and replacements.

A way to control sulfidity levels is to purge electrostatic precipitator ash from the recovery boiler (Andersson 2014). Current liquor cycles in the kraft pulping process are highly closed and only a small fraction of the chemicals leak. These closed systems help to comply not only with strict environmental limits but also to reduce the cost of make-up chemicals.

Zhu, W., (2013) “Equilibrium of lignin precipitation.” Thesis for the degree of Licentiate of Engineering. Chalmers University of Technology. Gothenburg, Sweden.