News
THE TEAM BEHIND THE GRANDE PRAIRIE MILL 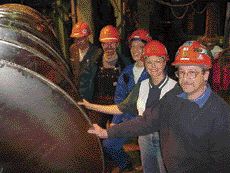 THIS MONTH WE TRAVEL TO ALBERTA AND WEYERHAEUSER’S GRANDE PRAIRIE MILL TO PROFILE MILL MANAGERS FROM ACROSS THE NATION WHO HAVE HAD A SIGNIFICANT IMPACT ON BOTH THEIR WORKPLACE AND ON THE INDUSTRY AS A WHOLE. LONG KNOWN FOR ITS QUALITY KRAFT PULP PRODUCT, WE EXPLORE THE BEHIND THE SCENES MANAGEMENT STYLE OF TWO INDIVIDUALS WHO RAN THE OPERATION STARTING IN 1999.THE COMBINATION OF VP, CATHY SLATER AND MILL MANAGER, MICHAEL MORGAN HAS CREATED A STRONG WORKFORCE THAT FOCUSES ON SAFETY AND LONG TERM COMMITMENTS.

In 1900 Frederick Weyerhaeuser and his partners acquired 900,000 acres of forestland in the Pacific Northwest of the United States. With the purchase of 10,000 more acres of forest in British Columbia in 1911, the Canadian roots of the operation were planted. A century later, the name Weyerhaeuser is synonymous with being one of the world’s largest producers of softwood lumber, hardwood lumber, softwood market pulp, containerboard packaging material, and uncoated freesheet paper. Its Canadian operation began in 1965 and has grown to become the second largest forest products company in Western Canada, with facilities in British Columbia, Alberta, and Saskatchewan. The present-day company slogan, “The future is growing” is most appropriate. With the official Weyerhaeuser corporate vision of “being the best forest products company in the world and a global leader among all industries,” Frederick Weyerhaeuser would be proud of the past 103 years.

In 1987, the company established its presence in Alberta with the purchase of a lumber mill and an oriented strand board (OSB) mill in Drayton Valley. With major acquisitions in Grande Prairie, Grande Cache and Slave Lake in 1992, Weyerhaeuser’s roots in Alberta were solidified. The Grande Prairie mill, built in 1972, is located on the Wapiti River, approximately 500 kilometres northwest of Edmonton. It is surrounded by boreal, and sub-alpine forests. The bleached kraft pulp which is produced at the mill, is valued for its tensile strength, sheet formation, surface smoothness and opacity.

“Who would have thought when I was a young girl growing up in Alabama, that I would end up in Alberta as the vice president of a pulp mill?”, said Cathy Slater, referring to her four year appointment at the Grande Prairie location. I interviewed Slater just days before her return to the United States, having been promoted to the position of vice president and mill manager of the pulp mill in Port Wentworth, GA. Her four years in Alberta were, she admitted, “a great learning experience about the Canadian way.” On her arrival, she found that the community in Grande Prairie was not only strongly involved in the Weyerhaeuser operation, but was equally motivated to share in making the facility more successful. “I have never seen such community support,” said Slater, adding “it made me feel right at home.”

Being a woman and being from the southern United States, Slater was different than her predecessor, but such differences melted away in the first few weeks. “I will never forget that first day when I arrived, and the temperature was 38 degrees below zero F. I started that day in Atlanta with 70 degrees F. I quickly learned what a toque was used for.”

Together with Michael Morgan, pulp mill manager, Slater has achieved major successes in Alberta, beyond just the expected efficiency of running a mill. The two both feel that an employee is a company’s number one asset.

Safety in the workplace, always a major consideration in any operation, was highlighted. Forestland Manager, Roger Loberg said, “When she [Slater] delivered a message on safety direction, you sensed that she cared deeply for the employees.” Her “Heart of Safety” campaign is still alive today, and as Morgan says, “her passion for constantly re-enforcing the safety message will always stay with the employees.” As a matter of fact in 2000 the Grande Prairie mill won the Safest Mill in Canada Contest awarded by Pulp and Paper Canada. Awards aside, the sincerity of the campaign for safety echoes throughout the mill, and can even be heard on Morgan’s telephone answering message as he greets you with a heart-felt “have a safe day”.

Morgan and Slater hail from different corners of North America, but both share a background of chemical engineering degrees, Morgan from Lakehead University in Thunder Bay, ON, and Slater from the University of South Alabama in Mobile. What they also share is a passion for the process of pulpmaking, which is the quality that bonds them together.

On the issue of employees, Slater says, “I want any facility to be successful, and for that to happen, I have to offer the employee the right opportunities for personal development within the company. It is for the good of the company as a whole.”

Morgan applauds this initiative and adds, “We all benefit when employees are involved and offer long term commitments to their workplace.”

The Grande Prairie mill has seen many dynamic transformations in the last decade since Weyerhaeuser has acquired it.

In early 1999 Cathy Slater arrived to Grande Prairie, AB, as an American from the south. In 2003 she left as a friend, leaving behind a distinct impact on the employees of the mill. Roger Loberg, Forestland Manager sums it up by simply saying, “we will all miss her”.

1966 The region around Grande Prairie searches for an industrial boost

1992 In June the site celebrates its 20th year anniversary. In August Weyerhaeuser announces purchase of the Grande Prairie operation

SNAPSHOT OF THE LAST DECADE

The Odour Reduction Project came on line, and a recycling partnership was initiated with Recycle Plus

2001 First phase of the GPOP initiated, with double felting and a new press for the pulp machine, a new chip bin and chip meter for the digester and a new tertiary air fan for the recovery boiler.

1 Comment » for THE TEAM BEHIND THE GRANDE PRAIRIE MILL