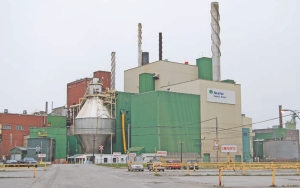 An injection of cash and enthusiasm will see the Thurso

With its recent acquisition of the idled Thurso pulp mill located in the Outaouais region of western Quebec, Vancouver-based Fortress Paper plans not only to make a splash on the market, but a significant profit, too. By ditching the production of northern bleached hardwood kraft pulp in favour of manufacturing dissolving pulp, the company is confident it won’t fall prey to the relentless profit losses so many Canadian forestry companies have witnessed. “We’re expecting to generate $60 million (EBITDA) but could potentially see profits in the order of $200 million,” says Chad Wasilenkoff, president and CEO of Fortress Paper, with a confidence not often heard in this industry.

Wasilenkoff refers to himself as a “contrarian” investor, as he keeps a punctilious eye on industries widely considered to be depressed, only to pounce on opportunities to grab world class assets at heftily discounted prices. For his $3 million* purchase price, Wasilenkoff pocketed $85 million worth of assets in buying the Thurso facility from insolvent Fraser Papers.

Fortress Paper currently owns and operates two pulp mills in Europe — in Germany and Switzerland. With an emphasis on specialty papers, the company’s product portfolio includes non-woven wallpaper base products, graphic papers, and technical papers. Fortress officially incorporated in 2006, with the intention of taking a closer look at investments in the forestry sector. The company was not specifically seeking to invest in Canada, but had been observing the dissolving pulp market for a number of years. When the Thurso pulp mill came on the market, the timing and price were compelling.

The acquisition is also welcome news to the 320 people formerly employed by the mill, who will, with only a few minor exceptions, be back on the job in June 2010.

“The Quebec government was very interested in getting people back to work,” Wasilenkoff confirmed. “We were informed that not only does the mill provide work for 320 people, but an additional 2900 indirect jobs are supported by the operation, as well.” The provincial government’s motivation to see the facility p and running translated to a cash infusion of $102 million, in the form of a 10-year loan.

It’s money that Wasilenkoff anticipates no difficultly in repaying. “We’re extremely comfortable with the underlying

fundamentals,” he says, explaining the overall growth in the market his newly purposed mill will be supplying. “Asia will be our biggest market, and the textile industry there is very strong. As more and more people move into middle income brackets, research indicates consumption of clothing increases, and yet, cotton is an expensive material to produce. Rayon has very similar characteristics to cotton but is more absorbent and breathable, and is less expensive to produce. As a result, the finished product almost always trades at a premium compared to cotton. We consider this to be a very, very low-risk and high-return venture.”

Fortress has two additional multi-million dollar goodies in its bag: the company is entitled to $10 million from the federal Green Transformation Program, as well as $15 million from the Green Infrastructure Fund. Both are initiatives designed to encourage green energy generation and environmentally-friendly production upgrades. Fortress’ decision to construct a biomass-based cogeneration plant at the facility to produce green electricity positioned the company to benefit from these grants.

The mill won’t be making an immediate switch from NBHK production to dissolving pulp, however. Thurso will continue to churn out kraft pulp for another full year before producing its new product line starting in June 2011. Once the transition is over, the mill will produce 200,000 tonnes of air-dried product annually. The company plans to capitalize on bolstered demand for NBHK first. Wasilenkoff expects the restructuring to be a smooth process, however, as it requires very little in the way of retrofitting. Much of the equipment currently in the mill will be suitable for the production of dissolving pulp as it shares much in common with the process of manufacturing NBHK.

With a secure and reasonably priced fibre source (the company has a 50% Crown allocation), a ready-made labour force, and strong market fundamentals, Fortress appears poised for success. Coupled with Chad Wasilenkoff’s unstoppable “can-do” attitude, Canada’s pulp and paper sector may have a new market leader, and mentor, for the future. PPC

* After price adjustments, Wasilenkoff notes, the final price paid for the Thurso facility may be in the order of $900,000.