As one of the few segments of the paper industry forecast to grow, the tissue segment is attracting investment from many Canadian producers 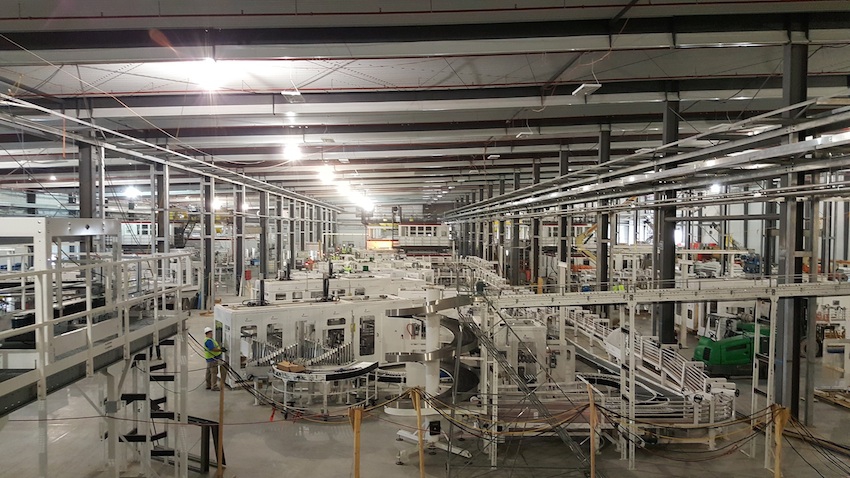 One of Resolute's new converting lines at Calhoun

Jan. 24, 2017 – Canadian paper producers are very active in the tissue sector right now, investing capital and marketing efforts to expand their share of the tissue and towel market.

Tissue is a paper product that cannot easily be substituted and therefore has proven to be a good long-term investment with a stable market. According to Fisher International, the annual growth rate in the North American tissue and towel sector since 2007 has been an average of one per cent, which tracks with population growth, so the per capita consumption has not changed. By contrast, the global consumption over the same period has risen at an annual rate of 5.4 per cent, driven by increased prosperity in the developing world, especially China.

New technology opens up the market
Tissue is generally manufactured at three quality levels: premium, economy and away-from-home (AFH), although there’s a new wrinkle in this. The highest quality tissue is produced by a process known as through-air-drying or TAD. This results in very high bulk, absorption and softness. TAD was first developed in the 1960s and resulted in a number of patents by three main players in the business: Proctor & Gamble, Kimberly-Clark and Georgia-Pacific. These companies capitalized on TAD technology to dominate the premium market, building many new machines over the next three decades, until the patents began to expire in the late 1990s.

As explained by industry analyst Paul C. Quinn at RBC Dominion Securities, with the expiry of these patents, the installation of TAD technology by companies, such as Kruger Products, First Quality and Clearwater, in recent years has allowed them to compete better in the private label market, by offering all levels of tissue quality to retailers to increase their market share.

A recent advance in tissue-making technology has allowed quality close to TAD products at a significant energy savings. Several machines with Voith’s ATMOS and Valmet’s NTT technologies have been built in the last five years. North America’s first ATMOS tissue machine was installed in 2011 by Cascades on its PM2 at the Candiac, Que., mill. The world’s first NTT machine started up in Mexico in 2013 and the first in the U.S. started up in Natchez, Miss., in October 2016.

The emergence of these two technologies has resulted in a quality distinction between TAD-produced tissue, now often designated as “ultra-premium,” and tissue produced by these new technologies, which is just “premium.”

One reason Cascades invested in ATMOS technology in Candiac is to produce superior quality tissue paper with a majority of recycled fibres, since it is more difficult to produce bulk and absorbency with recycled content.

Among Canadian players in the tissue market are Kruger, who holds a leading position, Cascades and Irving. Another Montreal, Que.-based company, Resolute, has entered the market in the last year, but only in the U.S. to date.

Kruger adds capacity in Quebec
Kruger Products (KP) is the tissue branch of Kruger Inc. It has three mills manufacturing tissue paper in Quebec (Crabtree, Gatineau and Sherbrooke), one in New Westminster, B.C., and one in Memphis, Tenn. The Memphis facility includes a modern TAD machine that started up in 2013.

KP’s Canadian capacity represents 37 per cent of total Canadian tissue manufacturing capacity. According to Steven Sage, vice-president of sustainability and innovation, KP’s current strategy is to retain its leadership position in the Canadian tissue market while continuing to expand its U.S. business, in both the consumer and commercial segments.

KP’s major project in 2016 is a $55-million project to install an additional tissue machine for the AFH market in Crabtree. The machine was acquired from the bankrupt Lincoln Paper and Tissue earlier in 2016, and has been dismantled and moved out of Lincoln’s site. The building at Crabtree to house the machine is set to be completed early January 2017, with the machine scheduled to start up August 2017. This will result in a capacity increase of 20,000 tonnes at Crabtree.

KP also acquired Metro Paper’s Canadian tissue converting assets, located in Trenton, Ont., and Scarborough, Ont., in mid-2014. Parent rolls are shipped from KP’s tissue mills in Quebec to supply these converting facilities, which serve the AFH market, allowing them to produce products near the majority of Canada’s population centres.

Resolute joins the market
Resolute Forest Products has been involved in market pulp, newsprint, specialty publication papers and lumber for many years. The company’s acquisition of Florida-based Atlas Paper Holdings in November 2015 follows a strategy of diversification away from shrinking publication paper markets. Atlas manufactures tissue products at two facilities for the AFH and private-label consumer markets, offering both virgin and recycled products in a range of grades at 63,000 tonnes of capacity. But the investment hasn’t yet produced the positive results Resolute expected; integration is taking some time.

Seth Kursman, vice-president of communications, sustainability and government affairs for Resolute, said the consolidation of the Atlas assets in progress. “We are making progress with various ongoing initiatives. Our target is $8 to $12 million in annualized EBITDA in 2017.”

Resolute’s second investment in tissue is a $270-million state-of-the-art facility in Calhoun, Tenn., to manufacture premium private-label tissue, including bath and towel, aimed at the growing retail market. The investment will include a tissue machine and three converting lines, with a total capacity of 60,000 tonnes. The machine will use Valmet’s NTT tissue production technology, and is expected to start up by the end of the first quarter of 2017. All of the converting lines should be fully operational by the end of 2016. The overall project remains on time and on budget, according to Kursman.

Cascades improving assets and expanding
Cascades Tissue Group has 20 manufacturing and converting sites across Canada and the U.S. Jean Jobin, president and COO of the group, said in an interview there are several aspects to its current strategy. First, the business wants to grow geographically. Well-established in Ontario and Quebec and east of the Mississippi, Cascades has been expanding on the west coast with investments in Oregon, as well as in the southern U.S.

In late 2014, Cascades started up a second tissue machine at its St. Helens, Ore., facility and the company is currently building a new tissue converting facility nearby in Scappoose, Ore., to serve both the AFH and retail markets.

In May 2016, Cascades took a majority position in Longhorn Paper Converting in Grand Prairie, Texas. Jobin sees this move as gaining a foothold in the second-most populated and fastest growing U.S. state.

Other elements of Cascades’ strategy are improving the integration rate, improving the asset base and producing higher quality products. One example is its 2014 investment to build a converting plant in Wagram, N.C. Another is its investment to upgrade the Candiac, Que., converting facilities in 2015 to produce high quality hand towels on equipment well-matched to the site’s 136-in. machine trim rather than selling 102-in. parent rolls, which results in poor trim efficiency.

Although North American growth is only forecast at one per cent, consolidation and modernization of assets make the tissue segment a very active portion of the Canadian paper industry.

***
Tissue basics
The principal products in the tissue market are facial and bathroom tissue, napkins and paper towels. The market can be divided into consumer (or “at-home”) and commercial (“away-from-home” or AFH).

Production of tissue requires the manufacture of the paper plus conversion and packaging. Since tissue paper is very bulky, the cost of shipping tends to limit the distance between the paper manufacturing sites and conversion facilities to about an 800 km radius, according to industry analyst Paul C. Quinn at RBC Dominion Securities.

This article was previously published in the Winter 2017 issue of Pulp & Paper Canada.