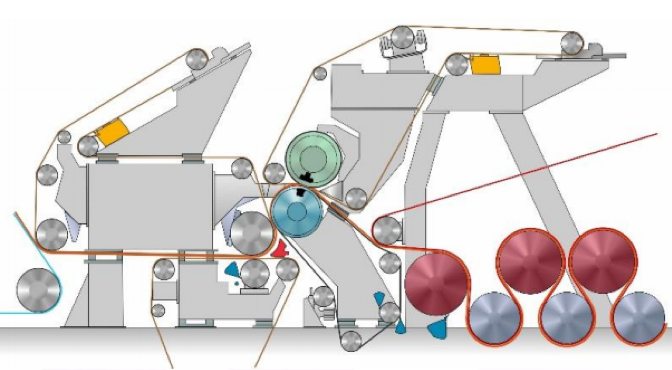 The pandemic has accelerated the decline in demand for printing and writing papers in North America and Europe, in particular newsprint. Meanwhile, growth in e-commerce has increased the demand for packaging materials. This has led to many paper machines being shut down or converted to other grades, especially packaging.

Several papers dealt with new technologies relevant to this topic at TAPPI’s PaperCon 2021 virtual conference, held May 5 and 6. The event presented some of the content that had been slated for the 2020 conference, which was postponed due to the pandemic.

The remainder of the 2020 program will be part of TAPPICon, a face-to-face conference in Atlanta running Oct. 3 to 6. It will bring together six industry segments: paper, tissue, nonwovens, recycling, maintenance and reliability, and women in industry. This article reviews highlights from the 2021 virtual conference.

As Sakari Karjalalainen explained in his talk, “The Future of Papermaking,” Valmet has developed several technologies that could be used in a rebuild or greenfield machine for packaging grades.

One of these technologies speeds up dewatering in the forming section. Valmet has designed a sleeve roll with an internal shoe that creates a higher dewatering force by means of a smaller turn radius. This could be used to retro-fit a top-former for higher basis weight packaging grades, or be used in a gap former.

Another technology addresses the long-standing desire to eliminate the open draw between the press and dryer sections. Breaks in this first open draw limit machine speed and lower efficiency. Valmet has developed a press belt to close this draw, as shown in Figure 1. This has now been installed on three machines.

A third development from Valmet is the metal belt calender. In 2012, Valmet’s Mika Viljanmaa was awarded the Marcus Wallenberg Prize for this innovation. The advantage of the belt calender is better smoothness and printability with higher stiffness and less bulk loss. To date, 10 of these calenders have been installed.

A recent development in papermaking is the use of nanocellulose in paper products. Broadly speaking, nanocellulose refers to small cellulosic particles.

When added to paper products, nanocellulose can enhance strength, permit lightweighting, or give barrier properties. Nanocellulose can be added to the inner layers of paper, for example in a water layer in a multi-layer headbox, or applied to the paper surface by a variety of different coaters.

Jack Miller of Biobased Markets provided an update on the growth of nanocellulose in paper and paperboard. Nanocellulose can be divided into two broad classes. One is cellulose nanocrystals (CNC), which are discrete nanoparticles of sizes about five nm in diameter by 100 nm in length, typically produced by acid hydrolysis.

The other is cellulose nanofibrils (CNF), nano-sized bundles of fibres with size of five to 20 nm in diameter by 500 to 3,000 nm in length, typically produced by mechanical means, sometimes with enzyme pre-treatment. CNC has possible applications based on its optical, electrical and chemical properties. CNF is good for strength and reinforcement. Both are also useful in non-paper applications, such as viscosity modifiers in drilling fluids, cement additives, wound dressings and scaffolds.

One of the problems with nanocellulose is the lack of common definitions in characterizing the material by size. This is demonstrated in Figure 2, where producers give different designations for nanocellulose of different dimensions.

Clearly, some standardization of terminology is required to properly understand the evolution of this emerging material.

The largest producer of nanocellulose material is FiberLean Technologies (see Table 1). As David Skuse explained, they produce a mineral/MFC composite by co-grinding pulp with a mineral, which acts as a micro-grinding medium.

A wide selection of mineral and fibres can be selected to tailor properties for specific applications. In effect, the mineral can be chosen to provide opacity, wear resistance, gloss or other properties, and the MFC provides the glue.

The resulting slurry has a consistency of one to two per cent. The composite is produced in satellite production plants at paper mills.

One of the challenges facing conversion of newsprint or specialty paper machines to packaging is modifying high-yield pulps (HYP) to meet the strength and surface properties required for these grades. Although many packaging and board grades are made with high-yield pulp such as CTMP to provide bulk and stiffness, these pulps are typically sandwiched between outer layers of chemical pulp.

The economical conversion of mechanical pulp mills will often require paper made primarily from HYP. This will require brightening, probably with hydrogen peroxide, and strengthening, potentially with CF or MFC.

Another approach was explored by Tove Joelsson and her colleagues from MoRe, Mid Sweden University and IPCO. Using a pilot steel belt press, running at low speed on the order of several m/min with two nips loaded to four and eight MPa and heated to temperatures up to 300°C, using a CTMP, they were able to achieve strength values close to that of kraft pulp. The concept is that under sufficient pressure and temperature, lignin will soften and glue the fibres together.

In order to avoid delamination and excessive adhesion, they used thin porous blotters on both sides of the pressed sheet. These experiments demonstrated the potential property improvements under these conditions. However, the challenge will be to duplicate this at commercial speeds.

The CondeBelt dryer, which uses a metal belt that was patented in 1975, has met limited commercial success. Perhaps the application of HYP for packaging grades would be an incentive to modify this design to apply nip pressure and to operate at higher temperatures.

Dryness after the press section

The moisture in the paper after the press section has a critical effect on the energy for drying. It also affects paper strength in the dryers and consequently paper machine runnability. The perennial questions asked by papermakers are: what is the maximum practical dryness after a press nip and what factors determine this limit?

Using solute exclusion measurements from papers by Stone and Scallan of Paprican, we showed that equilibrium moisture of paper subjected to mechanical pressure is determined by water held by surface tension within the fibres. Additional water can only be removed by higher applied pressure.

Given the practical limits on the toughness of roll covers, belts and felts that limit maximum pressure, a practical limit on solids content from a press section is about 60 per cent. Higher pressed solids would require modifications to the cell wall of the fibre, perhaps using enzymes.PPC