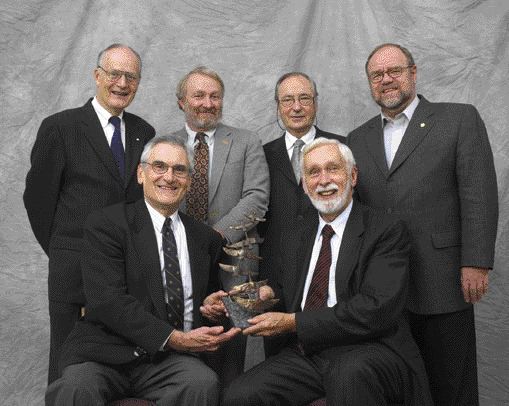 The Synergy Award arrives at an interesting juncture for Paprican. As a result of a recent restructuring to focus even more of the Institute’s activities on technology transfer and implementation in member pulp and paper companies, Paprican has become increasingly reliant on universities to carry out the necessary fundamental science and research that will underpin the sector’s future growth opportunities.

“In some sense, Paprican needs the universities more than ever because its capacity to do fundamental research has diminished as the organization concentrates more on applied research for members,” observed Dr. Richard Kerekes, director of the Pulp and Paper Centre at the University of British Columbia (UBC). Dr. Kerekes is among a small group of former PAPRICAN employees who transferred to university faculties under the restructuring.

“Because of increased emphasis on technology transfer,” explains Paprican President Dr Joseph Wright, “we have diminished our in-house fundamental research and are looking to the universities to supply this. Such research in critical areas is essential as the basis for developing the next generation of technologies.”

One of the next major scientific and technological frontiers for the pulp and paper sector, according to Dr. Wright, is in the area of bioactive sensors. In simple terms, it involves the study and development of bio-active materials incorporated into paper-based products. For example, bio-active sensors imbedded in a paper-based package might be used to indicate food spoilage through colour change, or sensors can be incorporated into a protective medical mask to signal the presence of a dangerous virus.

To explore these new opportunities for the pulp and paper sector, Paprican and its university partners have submitted a major funding proposal to NSERC, called the Sentinel project. Spearheaded by Dr Robert Pelton of McMaster University, the scientific leader of the Canadian Pulp and Paper Network for Innovation in Education and Research (PAPIER), the Sentinel project would see Paprican significantly broaden its university linkages with a whole new cadre of researchers in life sciences disciplines.

“I believe it’s a tremendously exciting proposal,” remarked Dr. Wright. “The idea here is to grow connections with academic researchers to do things we certainly don’t have the skills for within the Institute. We want to help industry create new linkages to growth-oriented technologies emerging out the bio-sciences — technologies that could add value and functionality to paper-based substrates.”

Growing connections to universities is something that PAPRICAN has done very effectively over the years. As Dr Kerekes pointed out, “university interaction is deeply rooted in the culture and history of the Institute”.

Indeed, Paprican was born on the campus of McGill University in 1925, where it operated as an Industry-University Research Institute until 1950. Although primarily funded by industry, its researchers assumed many of duties of university faculty.

In 1950, Paprican became a not-for-profit corporation and re-located R&D operations to its present facility in the Montreal suburb of Pointe Claire. For the next two to three decades, Paprican devoted considerable resources to academically oriented research “because there were all kinds of science-based questions that weren’t being answered” recalled Dr Wright. “The science-based research was almost overwhelming at times compared to the delivery of technology.”

By the 1980s, Paprican began to place a far greater accent on technology transfer, leaving advancement of fundamental pulp and paper science and engineering increasingly in the hands of its of university partners. “We needed,” said Dr Wright, “the universities to offset some of the loss of scientific capacity that occurred when Paprican became more pre-occupied with technology implementation.”

Not surprisingly, during the last 25 years, Paprican has expanded its university connections considerably. The foundation for the new connections is the formal and long-standing arrangement with the Pulp and Paper Centre at McGill, where researchers are active in organic chemistry of wood and related compounds, colloidal and interfacial aspects of paper and papermaking, pulping and bleaching, and engineering fundamentals of pulp and paper. Building on the McGill model, Paprican created similar formal linkages with UBC in 1978 and Ecole Polytechnique in 1984.

The UBC initiative, which culminated in a new Pulp and Paper Centre in 1986, currently supports about 20 faculty researchers from 7 departments engaged in environmental engineering, chemical pulping technology, energy, process control, fibre processing, papermaking, and computational fluid dynamics. Of note, the UBC Pulp and Paper Centre has already garnered three other project-specific Synergy Awards for a fibre quality analyzer (developed in partnership with Paprican) and a pair of software packages (Brainwave and IntelliMap 3) tailored to industrial process control.

At Ecole Polytechnique, Paprican provided support for the first-ever NSERC chair in paper coating technology, and more recently backed the creation of an NSERC chair in environmental design engineering aimed at process integration in the pulp and paper industry. According to Dr Wright, Ecole Polytechnique has boosted the supply of francophone students available to Paprican’s Quebec-based members.

Paprican’s direct and in-kind contributions to these three universities typically exceeded over $2 million annually. “A contribution of that kind would be exemplary in any given year,” suggested Dr Kerekes. “The fact that Paprican was able to sustain it over many years, even during difficult times for the industry, is extraordinary.”

Ecole Polytechnique, UBC and McGill also maintain strong institutional ties to Paprican. Senior executives from the three schools have seats on Paprican’s board of directors, and membership on the Institute’s Research Program Committee. “These institutional links are absolutely unique because they provide a regular forum for university executives to engage industry CEOs,” noted Dr Kerekes.

By 1990, Paprican had greatly augmented its university linkages as the lead sponsor of the Mechanical Wood-Pulps Networks (MWPN) of Centres of Excellence. A 12-year, $85 million research effort, MWPN connected 46 principal investigators at 16 universities and 32 industrial partners.

“With Mechanical Wood Pulps, we brought in new expertise, in photo-chemistry and photonics for example, that weren’t normally available within Paprican and the industry in general,” submited Dr Wright. “The idea was to do things that weren’t possible before, to solve old problems with new skills.”

During its 12 years of existence, MWPN trained approximately 280 post-graduate students, more than of third of whom found careers in the pulp and paper industry. Overall, Paprican’s affiliation with universities has produced more than 800 scientists and engineers with post-graduate degrees.

Meanwhile, innovations arising out of MWPN have yielded an economic impact of about at $30 million annually. The total annual impact of all university innovations is estimated at $46 million, or roughly 20 percent of the $230 million derived by Paprican’s member companies in 2003 from the application of the Institute’s advancements and expertise.

The economic benefits flow from Paprican’s ability to serve as an effective vehicle for knowledge transfer and application. In support of that role, the Institute publishes Paprican university reports (PURS), manuscripts ultimately destined for peer reviewed scientific journals. A
total of 31 PURS were published in 2003, together with a special annual report showcasing university collaborations and research results.

Dr. Wright said collaborating with universities is “more than just plunking money on the table. You must have an effective partnership, where all of the parties have clearly defined objectives and reasons for why the collaboration is useful. And you have to create these partnerships under win-win scenarios.”

“I’m just delighted that Paprican has been recognized with this Synergy Award as an innovator in academic partnerships. We’ve certainly been a leader promoting university relations for a very long time, but we probably haven’t been noticed much until now.”