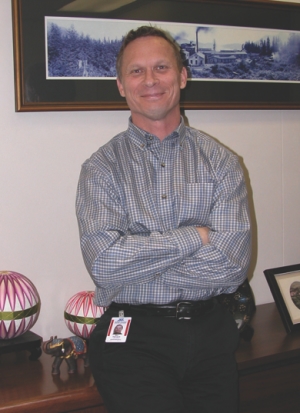 Port Mellon, British Columbia, has a rich history in the pulp and paper industry. There’s been a mill on this site on the shores of Howe Sound since 1909. The longevity of the mill is a testament to t…

Port Mellon, British Columbia, has a rich history in the pulp and paper industry. There’s been a mill on this site on the shores of Howe Sound since 1909. The longevity of the mill is a testament to the resourcefulness and adaptability of its people, which are being put to the test once again by the current turmoil in newsprint and pulp markets.

In the care of its most recent owners, Howe Sound Pulp and Paper, the Port Mellon operation was expanded and modernized to serve one market and then redirected toward another. When HSPP began, the bulk of the mill’s newsprint was sold to the Japanese market. Now, it has a North American focus, which required tweaking both the product and the process, and substantial changes to the sales effort.

“In the last few years, we’ve had to totally change our marketing strategy and our product to the typical North American product,” explains Mac Palmiere, president and CEO. North American newsprint buyers want a brighter sheet than what was destined for Japan.

More recently, the company had to lay off workers and take downtime to adjust to the rapid deterioration in both the newsprint and pulp markets.

Palmiere took the reins in early 2008, brought in by owners who weren’t happy with the mill’s performance. Since arriving, he has spearheaded a culture change that affects both employees and suppliers. Last year, he began a more rigorous performance management process, and this year the workforce was downsized by 19% and the workload re-distributed.

“We’ve worked hard with the union on getting costs out of the process. We’ve done some very tough things, and we’ve done them quickly.”

HSPP has cut costs through energy conservation and generation initiatives; improved the fibre mix and reworked fibre sourcing; and worked with suppliers to optimize the mill’s chemical usage and supply chain.

Which begs the question, why weren’t these changes made earlier? Palmiere is of the opinion that such rapid and dramatic changes were only possible because of current economic crisis.

“You’re putting a lot of people’s lifestyles at risk if you’re wrong.”

Palmiere is convinced that the traditional relationship between unions and mill management in Canada has to change, and he has hope that the transformation is beginning.

“The relationship needs to be much more proactive and co-operative. I think Harmac’s got it right, with its engaged workforce.”

And, he adds, “I’m happy with what I’ve seen from our local of the union.”

He also cites Alberta-Pacific Forest Industries and Alberta Newsprint Company as examples of efficient mills, and points to the low staffing levels of Finnish mills.

Palmiere’s biggest worry these days is that the recession will go on longer than experts are forecasting. “First-quarter results for forest products companies were dismal. That can’t go on for much longer.”

Regarding the market for kraft pulp, Palmiere says it caved in very quickly last fall. HSPP’s kraft mill took almost four weeks of inventory-adjustment downtime in the final quarter of 2008.

“The [newsprint] market is contracting much more quickly than we’d like,” Palmiere says dryly, “but we do have some customers that we’ve grown with.” He notes that HSPP produces a hiqh-quality, virgin sheet that has a good reputation for printability and runnability.

On the newsprint side, HSPP’s first market-related downtime occurred over a 10-day period in April 2009.

In the long term, for newsprint, “there’s no question that demand and consumption will be down, but there are regions that are growing.”

Some of those growing regions will be accessible to HSPP, thanks to its deep-sea port. “We can move paper and pulp very cost-effectively to Asia and some areas of Latin America,” notes Palmiere.

So despite market conditions that are changing at breakneck speed, Palmiere is confident that the changes HSPP is making will put the company on sound footing for the next chapter in its history.