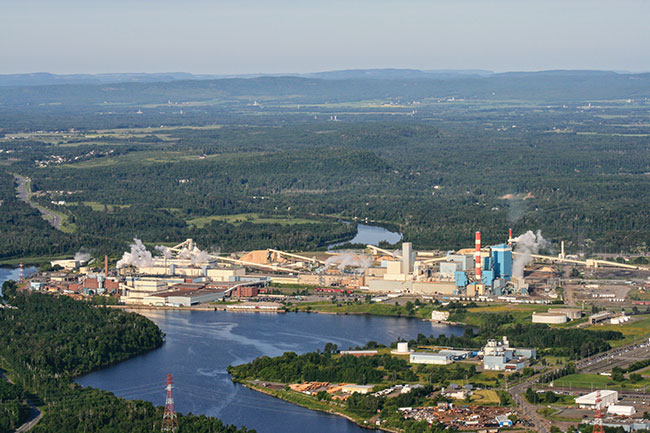 Resolute’s Thunder Bay pulp and paper mill, including its bioenergy plant. The mill has a cogeneration facility as well as biomass boilers, three in all, that use waste bark, process residuals and some woodlands residues (hardwood). Photo: Resolute Forest Products

Net zero is an eventual goal held by every industry in Canada, in alignment with the federal government’s goal for the country to reach net zero across all sectors by 2050. This achievement may be aided in some instances by various types of government support, but mostly it will be achieved by the perseverance and innovation of leaders at individual companies.

In the Canadian pulp and paper sector, companies have already done a significant amount to reduce carbon emissions. As they’ve met goals set in the past, firms across the industry have also put stringent future goals in place along with tangible roadmaps to get there. At the same time, companies also point to the need for government policies that will allow the sector to make more gains at a faster pace.

“Canada’s pulp and paper sector has been a leader in carbon emissions reduction for decades,” explains Graham Kissack, vice-president of environment, health and safety and corporate communication at Paper Excellence. “We established 1990 baselines and goals after the Kyoto Accords and we’re one of just a few industrial sectors that have demonstrated significant reductions since then. Overall, we’ve been really successful by aggressively cutting energy use and switching away from fossil fuels.”

Seth Kursman, vice-president of corporate communications, sustainability and government affairs at Resolute Forest Products, agrees that energy conservation measures and fuel switching have enabled the most significant GHG reductions, even when measuring overall emissions on an intensity basis.

By fuel switching and investing in energy projects, in 2020, Paper Excellence produced carbon emissions that were 60 percent less than what was produced in 1990. Today, 84 percent of their energy comes from renewable sources like black liquid and waste bark, along with hydroelectric power. This energy mix is similar for companies across the sector. “From just our current operating mills, that’s a difference of almost a million tonnes a year compared to 1990,” says Kissack. “If we include our shutting down of non-competitive facilities, it swells into two million tonnes a year. We’ve made a lot of investment in new technologies and assets, switching to boilers, for example, that generate more energy per unit of fuel combusted.”

In 2014, Resolute accomplished an important milestone in being onsite coal-free in Canada and the U.S. Like Paper Excellence and others, Resolute has increased the use of biomass, done some switching to gas-fired boilers, and uses hydroelectric power. “In terms of scope 1 (onsite generation) and scope 2 (purchased electricity) emissions, we’ve achieved reductions of 85 percent by the end of 2020 versus emission levels in the year 2000,” says Kursman. “Our initial goal over a decade ago was to reduce by 65 percent by 2015 and we exceeded that target. Now we have a goal to reduce scope 1 and 2 GHG emissions by 30 percent by 2025 with 2015 as the baseline.”

At Cascades, vice-president of communications, public affairs and sustainability Hugo D’Amours explains that “on top of the fact we were built around recycling, Cascades has reduced by 50 percent the intensity of the emissions of its mills since the reference year 1990 (scope 1).” The company’s fourth action plan sets bold carbon reduction objectives for 2021 to 2025, and also 2030.

Some use of carbon market offsets also exists in Canada’s pulp and paper sector. For example, Paper Excellence has used offsets since 2007 with its scope 1 ‘carbon-neutral’ writing paper call Sage. Verified offsets are purchased by Paper Excellence according to the size of each Sage order, says Kissack, ensuring that the small amount of carbon associated with production is nullified.

Replacing fossil fuels
Many members of the public may not realize that the pulp and paper sector is also innovating in many exciting ways with regard to replacing the use of fossil fuels in every industry.

For example, Canfor Pulp Products and Licella Fibre Fuels (an Australia-based biofuels start-up) have jointly formed Arbios Biotech, explains Kate Lindsay, senior vice-president and chief sustainability officer at the Forest Products Association of Canada (FPAC). Licella’s first-of-its-kind Catalytic Hydrothermal Reactor technology will be used to economically convert low-value biomass from wood waste and pulp mill waste into biocrude oil. Lindsay adds that “a recent global alliance between Arbios Biotech and Shell Catalysts and Technology aims to create a biorefinery focused on low-carbon intensity and the circular-economy to further upgrade the biocrude into biofuels, with applications in heavy-duty vehicles and aviation.”

Lignin is also being re-captured in Canada so that it can be used to displace various fossil-fuel-based products. Canada’s first commercial-scale lignin recovery plant is located at West Fraser’s pulp mill in Hinton, Alta. Here, the 30 tonnes of lignin produced daily can be used to displace fossil-fuel-based chemicals in the production of manufacturing adhesives, resins and composite materials, saving both energy and money. Lindsay adds that “the mill has also been working to replace the phenol formaldehyde resins in its plywood operations with lignin produced at the Hinton pulp mill. Every tonne of lignin substituted [in this way] prevents one tonne of CO2e from entering the atmosphere.” 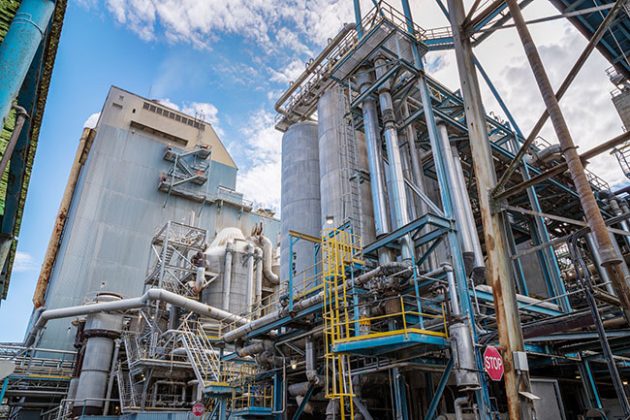 Looking forward
This year, FPAC has undertaken a thorough review of its ‘30 by 30’ Climate Change Challenge initiative with the objective of pivoting this work to contribute to the Canadian government’s goal of the country being net zero by 2050.

But according to FPAC, Canada’s forest sector is one of the few industries with the potential to go beyond net zero. This can be achieved through the removal and storage of carbon in wood-based products, continued ‘greening’ of operations, enabling other sectors to transfer off of fossil fuel energy, and reducing land-based emissions through ‘climate smart’ forestry.

“As we map the path to net-zero carbon by 2050, the sector continues to pursue opportunities towards next-generation bio-refinery capabilities and the development of new bio-sourced products,” Lindsay says. “We also see opportunities for further commercialization of Bioeconomy with Carbon Capture and Storage (BECCS), such as the recent announcement by Stockholm Exergi in Sweden (a BECCS-plant connected to existing biomass combined heat and power plant), for negative emissions.”

In Kissack’s view, the single biggest challenge to net zero for Paper Excellence is quite specific. “Along with the rest of the pulp and paper industry, we’re looking forward to the emergence of some technology to reduce fossil fuel use in our lime kilns,” he notes. He adds that the federal government’s decision to go to $170/tonne for carbon is especially challenging for energy-intensive industries like pulp and paper, but that “we look forward to working with the federal government and provinces on the right policies that recognize the investments that will be needed and policies that will foster those investments.”

Kursman believes the pulp and paper industry plays a critically important role in managing climate change and that “sustainable forestry is an inextricable part” of a truly global response. He also notes the importance of raising the bar. “Goals must be aspirational yet achievable,” he says. “Companies in the forest products industry and beyond need to embrace a spirit of continuous improvement. We should judge success not by what people say but by what they do. Commitments must be backed up by transparency, accountability and strong governance.”

“The old paradigm,” he adds, “that assumes what’s good for business is bad for the environment or what’s good for the environment is bad for business is way off the mark. People who view the world from that perspective are not real leaders and they don’t contribute constructively to addressing the complex challenges of our time. We have a collective responsibility in building a truly sustainable future, and that requires collaboration and a recognition of industry’s contributions.”