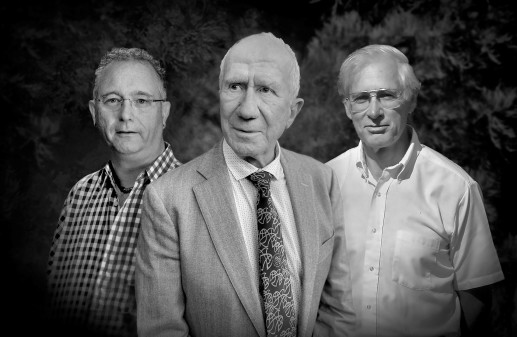 Nicholas Coops, professor in the Faculty of Forestry at University of British Columbia (UBC) and Canada Research Chair in Remote Sensing (I), is part of a research team that won the 2020 Marcus Wallenberg Prize (MWP).

The MWP is considered the world’s highest recognition for excellence in forest industry research.

Known as “the Nobel Prize of the forest sector,” Coops shares this year’s prize with colleagues Richard H. Waring of Oregon State University and Joseph J. Landsberg of the Commonwealth Scientific and Industrial Research Organization in Australia.

The 2020 prize, which consists of two million Swedish kronor, was awarded in recognition for their work on the 3-PG (Physiological Principles Predicting Growth) model developed by Landsberg and Waring, which predicts forest growth and the ability of forests to store carbon.

With Coops’ work on satellite imagery, it is now possible to make these predictions on a much larger scale.

“The Canadian forestry sector continues to be a global leader in innovation,” says Seamus O’Regan, Canada’s minister of natural resources, in a statement. “My sincere congratulations to Dr. Nicholas Coops for this well deserved recognition.”

Landsberg and Waring became pioneers when they presented the 3-PG model in 1997 to predict forest growth under changing environmental conditions. The model is also able to calculate how actions, such as thinning and fertilization, affect forest growth and development.

Forest growth forecasts have traditionally been based on forest surveys of previous growth without the ability to include changes in silviculture or the surrounding environment. A process-based model such as 3-PG can also include the effects of silviculture and environmental factors and give predictions of current and future forest production.

Coops added satellite imagery analysis to the model to enable large areas of forest to be surveyed.

Now it is possible, among other things, to predict forest growth and carbon storage on a large scale, calculate how diversity of the forest landscape can be developed over time, and assess the risk of outbreaks of insects and large forest fires in inaccessible forest areas.

Pushing 3-PG into the spotlight

Coops says that “one of the most exciting things about the honour of receiving the Marcus Wallenberg Prize is how it will inevitably further elevate the utilization of the 3-PG model.

“The 3-PG model is an open-source model, available from UBC, and can be easily used and accessed by graduate students and industry alike. Combining it with analyses from satellite images from space means that today, we can better answer questions such as the trends in the future growth of key forest species such as the Douglas fir in British Columbia.”

The technology is currently in use across Canada. In the BC Interior, 3-PG is being used to look at poplar and how the species might be able to fuel bioenergy plants. In Eastern Canada 3-PG is helping researchers to understand how forests are being impacted by drought and fire. Across the country, researchers are employing 3-PG to examine how some species will move across the landscape over time as a result of climate change.

Coops’s research has focused on the use of remote sensing techniques to gain an in‐depth knowledge of forest structure, health, biological function and diversity as well as further development and application of the 3-PG model globally. He has published more than 460 scientific articles in joint authorship in scientific journals.

With this distinction, UBC ranks as the top institution in the world with the most faculty-affiliated researchers to receive the MWP during its 40-year history, and Canada is now tied with Sweden as the top two nations with the most prize winners.

“3-PG is one of the world’s most widely used [models] for assessing forest growth. Before satellite imaging, it was applicable to forest plots. Now it can be used to make predictions on a global scale,” says MWP selection committee member, Daniel Binkley.

The prize will be awarded to Coops, Waring and Landsberg by King Carl Gustaf XVI of Sweden in a ceremony set for October of this year.