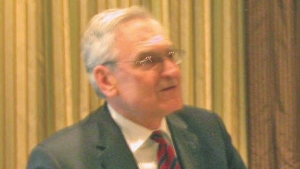 NORCROSS, GA. -TAPPI’s most prestigious annual award will this year go to Richard J. Kerekes, PhD, Professor Emeritus with the University of British Columbia in Vancouver.

NORCROSS, GA. -TAPPI’s most prestigious annual award will this year go to Richard J. Kerekes, PhD, Professor Emeritus with the University of British Columbia in Vancouver.

Kerekes will receive the 2010 TAPPI Gunnar Nicholson Gold Medal Award at a ceremony on May 4, during PaperCon.

“Dr. Kerekes’ contributions to research, technology, and education for our industry over a 38-year period are exemplary and make him a deserving recipient for TAPPI’s highest honour,” says Larry N. Montague, president of TAPPI. “He has made numerous significant contributions to papermaking technology during his career, including founding the Pulp and Paper Centre at the University of British Columbia where he established a research program between UBC and Paprican.”

“To a remarkable degree, he has contributed to most all of the unit operations in papermaking, from stock chests to calenders,” said Gary A. Baum, 2009 Gunnar

Nicholson Gold Medal Winner, who nominated Dr. Kerekes for the award. “His research has been characterized by a blend of solid science and the application of fundamental principles to the solution of practical problems.”

Kerekes spent the bulk of his career with Paprican, the Pulp and Paper Research Institute of Canada, now known as FPInnovations, serving from 1971-2001. He served as the director of the Pulp and Paper Centre at the University of British Columbia from 1983 until 2005, when he retired from UBC.

Dr. Kerekes has made outstanding contributions in education. As the first Paprican person to relocate to Western Canada in 1978, he was charged with building a program with the University of British Columbia. While there he founded the $6-million Pulp and Paper Centre; orchestrated a research program between UBC and Paprican; co-led the establishment of a Pulp and Paper Master of Engineering Program; and founded an Advanced Papermaking Initiative in 1998 based on a $8.5-million endowment from the Province of British Columbia.