We live in a power-hungry world. In fact, technology visionary John MacDonald argues that readily-available energy is the basis of our modern lifestyle. And he's concerned that our hunger for energy w... 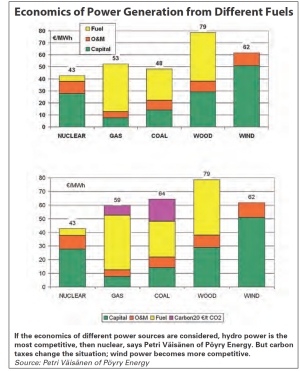 We live in a power-hungry world. In fact, technology visionary John MacDonald argues that readily-available energy is the basis of our modern lifestyle. And he’s concerned that our hunger for energy will exceed our conventional supply within this century. His pessimistic scenario proposes that world demand could exceed the capacity of our conventional power sources as early as 2012 to 2015.

What’s going to fill the gap? In his view, more nuclear power, and the development of renewable energy – solar, wind, hydro, biomass, geothermal.

His conclusion is that, despite the hurdles, there’s a real need for more energy supplies.

Into this potent stew of possibilities for green energy comes a growing Canadian bioenergy industry.

Lehtonen was a speaker at the PricewaterhouseCoopers Global Forest and Paper Industry Conference in May. He envisions a global market for biomass, driven by wood-poor nations trying to meet renewable energy targets.

Others agree that the industry is headed for a breakthrough.

“The way we use energy across North America is going to change.

B. C. is on the leading edge of this,” says Harvie Campbell. Campbell is a founder of Pristine Power Inc., an independent power producer based in British Columbia.

As support for bioenergy evolves, it becomes clear that there are many paths by which forest biomass can be exploited. Already, there is a market for wood pellets, composed of sawdust, for residential and industrial heating, particularly in Europe.

There’s a market for biomass gasification technologies that convert wood residue to syngas, which is then used for residential and industrial heat and power. This market is just entering the commercial stage, with numerous Canadian players.

There are also several projects underway to convert cellulose to ethanol, which is also in the early stages of commercialization.

Wood does not easily beget energy

One stumbling block for many of these technologies is that woody biomass is not a particularly energy-dense fuel source when compared with fossil fuels. However, acting in its favour as a raw material to produce electricity is the fact that it can be a steady, not intermittent, fuel source.

Because it becomes inefficient to transport woody biomass too far in its original state – as logs, limbs, tops, and stumps – bioenergy from wood is likely to be a local enterprise. Fossil fuels have high energy density; they’ve been cooked in the earth for hundreds of years, explains Michael Burnside, president and CEO of Catchlight Energy LLC. Petroleum is energy dense, and can be moved as a liquid or gas. “Moving solids is a different proposition,” he notes dryly.

For biofuel production, Burnside envisions a network of small plants, rather than the large refineries typical of fossil fuel transformation, because of the challenge of collecting and transporting biomass. “You need a large network of plants, because you can only move biomass so far economically.”

“We will need a large, distributed network vs. the petroleum industry today, which has a few large regional centres.”

Burnside has a unique perspective on this -Catchlight is a joint venture in biofuels development between Chevron and Weyerhaeuser.

Based on European experience, Lehtonen says a reasonable distance to transport tops and limbs is 30 to 50 miles. Closer to home, in B. C., Campbell estimates that 50 miles is the upper limit for transporting standing bug kill material. At those distances, however, it makes the electricity expensive, he comments.

“Power is the bottom feeder of the wood industry,” he adds. “We take anything -roots, stumps, limbs.”

Picture biomass as a global commodity

As the industry develops, the scale of individual biomass investments is increasing, requiring larger volumes of biomass, according to Petri Visnen, a biomass expert with Pyry Energy Oy.

“The biomass market will become more and more international. Biomass consumption for heat and fuel will more or less double by 2015,” he predicts. Biomass is expected to deliver most of the renewable energy for the European Union to meet its so-called 20-20-20 target (which includes a goal to have 20% of total energy production from renewable sources by 2020).

“It will change the traditional operating environment of the forest industry,” says Visnen. “We already see pulpwood going to power boilers.”

Visnen believes havesting residues are an underused resource that will become an important source of biomass in the future. The main biomass resource now is small dimension logs and wood chips.

Further, he notes, there are currently not many market players who could provide international biomass sourcing on a large scale.

To make a bioenergy investment successful, Visnen suggests that a company’s highest priority should be to secure a sustainable biomass supply.

More hands in the fibre basket

The current low cost of forest biomass is due to synergy with the forest industry, says Neil Barnard, CEO of Ceres BioVentures Ltd. In his view, competition between is looming between pulpwood users and those who use biomass for energy. “Depending on the conversion efficiency, bioenergy could pay a lot more for pulpwood than the pulp and paper industry.”

Magnus Hall agrees. Hall is CEO of the Holmen Group, an integrated forest products company based in Sweden. He foresees competition between pulp mills and biofuel producers. “I think we might find a fibre shortage and price pressure.”

There are some in the forest products industry who believe that bioenergy can’t stand on its own two feet when it comes to fibre supply.

“In my opinion, I think [bioenergy] is based on creative economics,” says Jim Shepard, CEO of Canfor. “I can’t see the economics of sending logging trucks into the woods to bring in wood to be burned in a boiler. I can see it if the wood [destined for energy] gets a free ride.”

Richard Garneau of Catalyst Paper contributes: “When you have a capital intensive facility, you need a low-cost raw material. We don’t have that on the B. C. Coast right now.”

In the current economic model, we assume green energy has to be priced higher than other power, he states. But governments should be wary of the effect any policy decisions could have on the pulp and paper industry.

On the other hand, supporters of bioenergy caution against protectionism toward traditional forest products.

Ross MacLachlan, president and CEO of Lignol Innovations, a biofuel producer: “If we’re going to grow this bioenergy industry, we need tenure reform and a robust suite of different applications for the fibre resource.”

Also representing the bioenergy side, Nexterra’s Jonathan Rhone notes that there’s a transformation happening in the world of energy as the industry considers the value chain for forest biomass. “We’ve got to get our act together up here. We can’t have the idea that one industry has a protectionist policy. Our interests are more aligned than not.”

“We won’t know how much we can draw out of the resource until we try,” says Catchlight’s Burnside. “Eventually it’s got to be an open market for fibre.”

Decisions that will shape the bioenergy industry are being made now. An important early step is the policy framework for renewable and clean energy.

“The industry’s transformation is just starting. How thoughtful are we going to be about it?” asks forest products analyst Don Roberts of CIBC World Markets Inc.

In B. C., “the policy
framework is right,” says the Council of Forest Industries’ John Allan. “We just need an implementation strategy.”

In Quebec, the provincial government announced this spring a policy for the allocation and harvesting of forest biomass. The biomass action plan will also promote the use of forest biomass as a substitute for fossil fuels. In addition, Hydro-Qubec is seeking proposals for electricity from biomass.

Federal lawmakers in the United States are at the point of defining types of energy that will considered “alternative” and “renewable”. Catchlight’s Burnside explains that the definition of qualifying biomass and conversion methods in the U. S. national fuel standards is very important to this nascent industry.

In B. C., the use of forest biomass for heat and power is proceeding well. Nexterra president and CEO Jonathan Rhone says the province is fertile ground for bioenergy.

“B. C. has advantages in bioenergy: we have a bioenergy industry already; we have world class equipment suppliers; we have a history of converting biomass to energy; we have a culture of innovation; and we have good government policies.”

Harvie Campbell of Pristine Power estimates that B. C. biomass has the potential to produce as much as 2500 MW of power, which could be sold for as much as $30 per MW/h.

For independent power producers, he says, the paramount concern is the risk of fuel supply interruptions. To encourage the development of this sector, the risk of sawmill closures needs to mitigated, and First Nations’ involvement needs to be respected. Other risk factors identified by Campbell are fuel cost as it relates to the transportation of roadside slash, and potential for changes to stumpage rules and rates.

Campbell’s risk assessment underscores a fundamental fact about the economics of bioenergy. Many in the field believe that bioenergy needs the forest products industry to share the cost of getting the resource from the woods to a plant where it can be transformed to energy.

Learning to live together

Be prepared for turmoil when the interests of forestry and energy collide, because all indications are that “green” energy is here to stay.

Converting biomass to energy is not yet competitive with other forms of electricity generation. It still needs subsidies, because the investment needs for power infrastructure are substantial.

Fibre supply is also an issue. While the infrastructure to access fibre is in place, “now it is a logistics issue,” says Lignol’s MacLachlan. “The cost of getting fibre to the gate in many cases makes the technology not viable.”

And there is some inertia to overcome. As Rhone states: “The value chains we are displacing -conventional energy -have been in place for a long time.” Not to mention the history of the forest products industry in this country.

But with global demand for electricity rising, and our culture’s strong dependence on fossil fuel, conventional energy sources are not in danger of being displaced. “My thinking is that world demand for energy keeps going up. All forms of energy will need to be delivered. Biofuels will supplement, not displace, oil. Every drop will be needed,” says Burnside.

“In the next few years, the challenge is how to get over that mountain of uncertainty.”

Much of the foregoing material was presented at the PricewaterhouseCoopers Forest Products Conference 2009, and the BC Bioenergy Conference, both held in Vancouver in May.

Related
The paper office
PAPRICAN’S RESEARCH OPENS THE DOOR to opportunities and growth for its Member Companies and Industry Partners
To Build or not to Build
People (May 01, 2002)