May 3, 2018 – Voith has converted the LEIPA Group's PM 5 from a newsprint to a packaging paper machine. On April 19, the acceptance and handover of the machine of the Schwedt PM 5 project was signed early at LEIPA Georg Leinfelder GmbH, with effect on April 13. 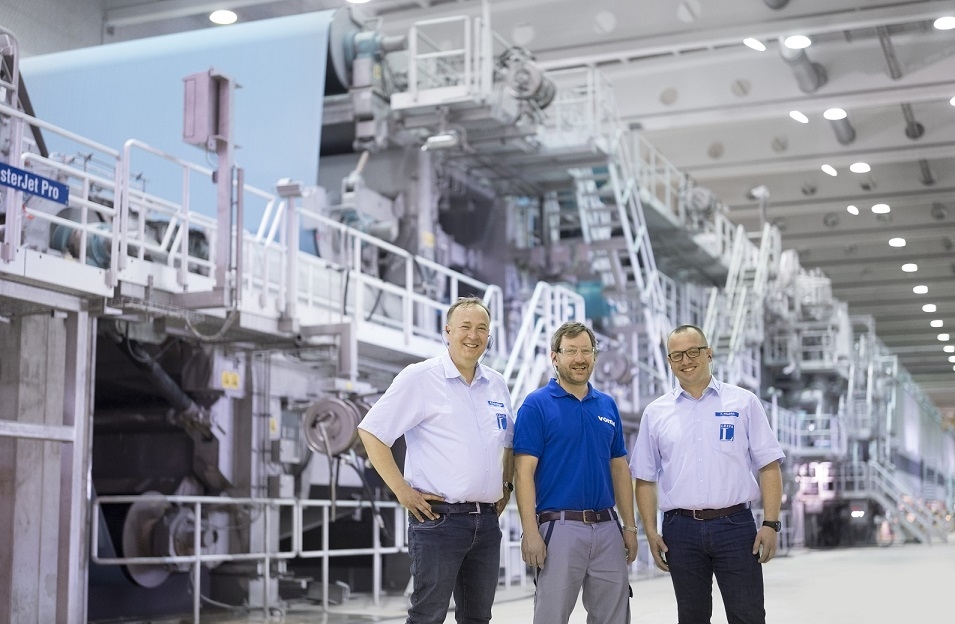 Perfectly matched components and an extensive automation system, including OnQ quality control system, make the machine a new benchmark in the industry. LEIPA can produce approximately 450,000 metric tons of white top testliner (WTTL) on the machine and is therefore a market leader in this segment. After taking over the UPM mill in Schwedt, the new owner, the LEIPA Group, decided to extensively rebuild the existing PM 11. Under the management of Voith, the conversion of the newsprint paper machine to a machine for the production of white top testliner (WTTL) began in October 2017. LEIPA invested more than 160 million euros in the plant. Now known as PM 5, the machine is a new point of reference for packaging paper. Just a few machines worldwide surpass its 9,200-millimeter wire width. It also takes a top spot with its production speed of 1,200 meters per minute. LEIPA plans to produce 1,180 to 1,400 metric tons of white top testliner per day with top surface properties and basis weights of 100 to 140 grams per square meter. LEIPA wants to manufacture a total of 450,000 metric tons of paper every year and thus expand its market position further.

Optimized for high speeds
To ensure the PM 5 can meet the desired output and quality requirements, Voith modified almost every component of the existing machine. A new hybrid former with two headboxes DuoFormer D and TopFormer F replaced the previous former, for example. Voith also developed a comprehensive solution for the transition to the press section and for the press, with a DuoCentri NipcoFlex shoe press in the centre. These two components were designed to meet the requirements in high speed machines and enable outstanding product quality. Robust SolarPress roll covers assist in achieving this. The covers do not require any water cooling and help LEIPA to conserve resources. The SpeedSizer AT is also optimized for the uniform and faultless application of starch at high speeds.

15,000 recorded signals ensure optimum paper quality
Some of the existing motors were also used after the conversion. However, the Voith team integrated more than 333 new motors of different sizes into the PM 5, the most powerful of which has a capacity of 1.5 megawatts. Most of the motors are integrated into the automation concept developed by Voith. The system records more than 15,000 signals, monitors all the production steps from stock preparation to the reel, reports even the slightest deviations and levels out any fluctuations within a fraction of a second where needed. 29 state-of-the-art computer processors take care of processing the information.

“The continuous data stream forms an important basis for us to maintain a consistently high paper quality at all times,” Falk Friedrich, plant manager of LEIPA Schwedt Nord, said.

Increased efficiency for paper treatment
While the rebuild was taking place, a new machine for the efficient treatment of up to 1,400 metrics tons of fibre from recovered paper per day was also built. With a length of 50 meters, a diameter of 4.5 meters and a total weight of about 200 metric tons, the IntensaDrum pulping drum is the largest Voith has supplied to date. Much of the existing de-inking system (DIP) was retained. Voith only had to modify it to cope with the characteristics of packaging papers. Among other measures, the technology group installed energy-saving components for bleach and flotation, which, along with the new cleaning system, reduce fibre losses.

“The engineers from Voith view the system from the apron conveyor to the winder, including measuring, automation and ventilation technology as a whole, and therefore develop perfectly compatible solutions,” Martin Kaltenegger, project manager for LEIPA PM 5, said.

Voith clothing for optimum performance
In addition, the order volume included start-up and a number of training sessions in which the LEIPA team became familiar with the intricacies of the PM 5. Voith will remain closely involved in the processes of the PM 5 after start-up, too. In the next few years, the single-source supplier will deliver the clothing and doctor blades for the machine and thus ensure the optimum performance of the PM 5. The optimization of the machine within the first eight weeks after start-up is also part of the project – with an option to extend it for longer.

“The entire project, from the shutdown of the PM 11 to the installation of the new components and start-up of the new PM 5 has gone very well,” Robert Osswald, project manager, Voith Paper, said. “With their professionalism and dedication, the two project teams have ensured the success of the project.”

Voith Paper is a group division of Voith and a leading partner and pioneer in the paper industry.