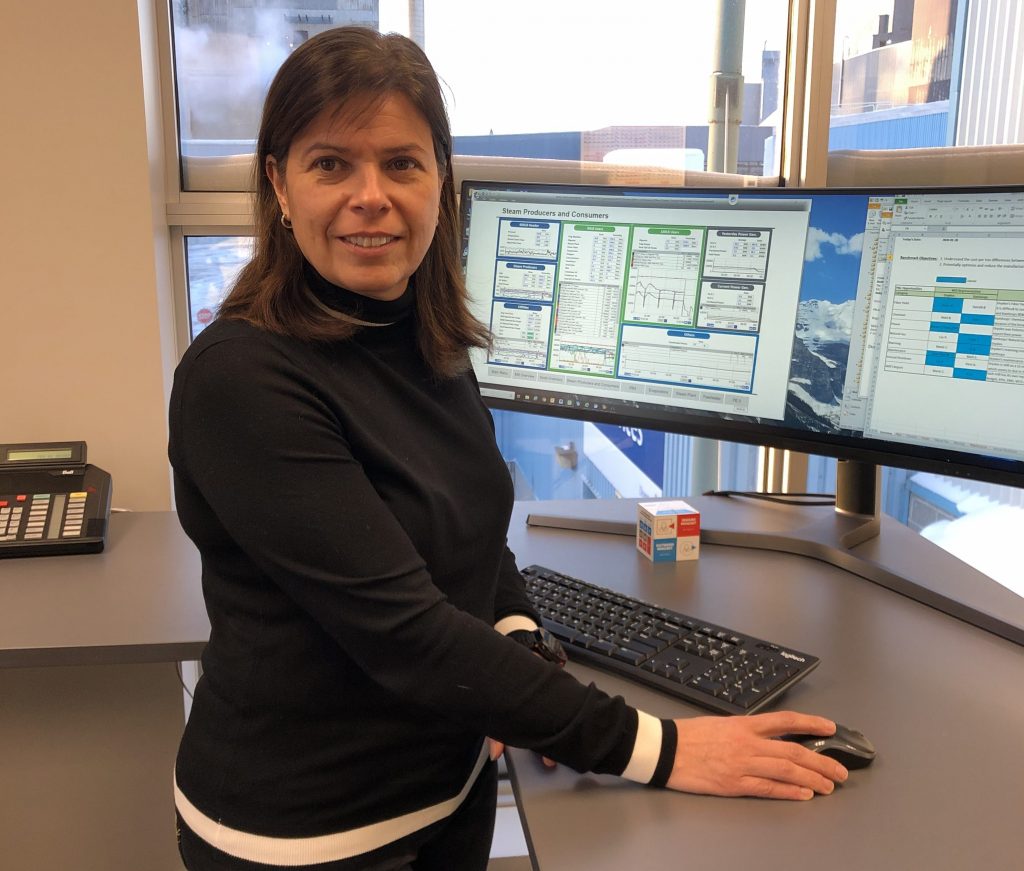 Marie Cyr served as pulp mill manager at Domtar’s Windsor, Quebec facility for six years before transferring to the company’s Dryden, Ontario plant in August 2019. Seven months in, Cyr is already making an impact by fostering a collaborative environment that welcomes ideas. “People at the site are adjusting to that and getting excited about that,” shares Bonny Skene, Domtar’s manager of regional affairs. “The other word thing that comes to mind is accountability. With Marie, you know if you commit to something, you need to deliver, period.”

Pulp & Paper Canada: How are things going in the new role? What’s been different from your role as mill manager in Windsor?

Marie Cyr: So far I would say that it’s been going well. People in the mill, they’re great. I had a warming welcome. I already have lots of friends. I’ve been outside fishing, hiking, and snowshoeing, and I’m enjoying my new role at the mill.

When I first started, I realized that the role was a little bit different than my expectations, mainly due to the fact that there are a lot of differences from the pulp mill manager position that I was in previously. I always kind of laugh about it that I should have read the little fine print on my offer! Things like forest management, certification and sustainability of the forest are added to operating and producing pulp.

[Domtar Dryden] had been shutting part of its equipment way back and this shaped the culture of the mill. When I got here, I said, this mill has other opportunities and we should be looking into new development. What can we do to have this now sustainable for the next 30, 40 or 50 years?

My leadership style is definitely way different for the site, and it caught some of the people by surprise. I’m trying to get everyone’s ideas and opinions to how to be sustainable and trying to build a roadmap or a plan for the next coming years.

PPC: It sounds like it’s been very collaborative so far.

MC: Yes. We’re really trying to find new ideas, trying to innovate. That’s part of the value. We’re looking at capital investment, we’re looking to be sure that the reliability in the mill is good, because we have been struggling in the past. We want to do it right.

The main project that we’re working on is to define a strategic plan. So I changed the structure to have a strategic development manager and find new ideas. This mill has many assets and equipment, but we have to think, where would be the best investment for the future? So we’ve done a mill assessment, and at the end of the quarter, we’ll have that plan deployed.

PPC: Safety was a huge focus for you at Domtar Windsor. Is that something that you’re bringing over to Dryden?

MC: I would say that on the safety side, the culture of Domtar is just about the same in all of the mills. In Dryden, we are doing really well. Now we are trying to reach another milestone – the number of consecutive days without any event, our record is 324, and we’re at 196 [ed. at the time of the interview].

For that, we’re building on having more of a proactive culture. I’m trying to implement from Windsor to Dryden the HPI tool and the Bradley curve. Here, we’re more in the supervision mode, so I want to get to the independent mode. We’re working on the tools to be even better.

PPC: You’ve been at Domtar most of your career. What do you like about working at the company?

MC: One of the things that I really like now is the fact that we’re working on talent acquisition, and the industry is more collaborative. And the diversity that we’re getting – more and more people with different potential and perspectives.

At Dryden, we’re building on getting leaders that are giving the possibility of all of our people to grow their ideas and then, you know, it’s not one brain that we’re using, it’s 350 brains. It’s unbelievable. It seems that people didn’t know that they could contribute to the success of the mill. It’s been [like] a tsunami where everybody wants to bring their ideas forward!

MC: I try to get everyone on the same page – to be more collaborative and have trust. Stop working in silos. It’s really thinking outside the box. Walk the talk.

PPC: What’s something you’ve been proud of over the course of your career?

MC: To be able to get to a point that the equipment is reliable, and then the employees [exceed] their expectations. Every time that I was able to get over that threshold of, oh my, everybody thought it was impossible but we reached it.

We were able to have a safety RIR of zero [at Windsor] – that means more than 365 days. And I remember the employees saying it’s impossible, we’re not going to do that. But then to reach that goal, to go over and beyond, that’s always something that I’m proud of. It has to be a team effort. I like to see my people shine. So every time that they do over their capabilities and what they were thinking, that’s something that really makes me proud.

I try to get everyone on the same page – to be more collaborative and have trust.

PPC: What excites you about the future of pulp and paper?

MC: We need to educate people about the possibilities, because the potential of the fibre – ¬beyond paper or pulp – like the nanocellulose, is something that no one thinks about. We can do a lot of different products. Everybody sticks to paper in the pulp side, but there’s so many other things that result from the same industry – there’s chips, sawdust, wood pellets. We can do bedding for animals. With pulp, we can do compostable bags. There are so many ideas and possibilities, the things I really like is the fact that there’s a lot of potential.

PPC: How did you end up in the industry?

MC: That’s a good question! Actually, my dad was in pulp and paper. All of my family – all of the Cyrs on my dad’s side, they’re all engineers. My dad was with Domtar, his brothers were with Kruger, and so it was kind of a typical subject during the Christmas parties.

I started as an application engineer in Nova Scotia and then for personal reasons I moved to Sherbrooke [Quebec]. And there was a pulp and paper company – a Domtar facility – there, and there was an opening. And because it was closer to family, I applied. To me, it wasn’t threatening because it had been in the family for years.

The leadership mode has changed from traditional to collaborative. We’re trying to change from reactive to proactive, from directive to coaching and support.

PPC: What did you find was the biggest challenge when you first joined the industry?

MC: The biggest challenge was to build my credibility with the guys. Typically it was really hard for a woman, because they wouldn’t believe that I would know anything about mechanics or equipment and assets.

And, of course, I was young. I remember thinking, I know what the diagram or the drawing of a pump looks like, but it’s not the same thing in the field. So at first I was kind of confused because I hadn’t had that hands-on activity.

But definitely one of the hardest parts was to build my credibility within the group. And it’s just about the same thing by coming here [to Domtar Dryden], the learning curve is really steep. And then there was a language barrier at the same time. It’s always challenging.

PPC: Did you find those initial challenges were more about being young than being a woman?

MC: I would say that they were more tolerant of the men than they were with the women. It’s fair to say that it was not only because I was young. When I grew up through the organization, it was always a challenge because I was a woman. And now, I want to say that it’s not part of the challenge. I think we’re more and more thinking that women are bringing great value to organizations.

PPC: Do you give back to younger people at the mill now through mentoring?

MC: Yes, I do. I had women asking, so I have a couple in Windsor that I still reach out to because they asked me if it was possible to mentor them.

I feel that I’m protective of some of the young process engineers in the mill and so I like to meet with them and socialize with them. I’m a closer type of person with those young women because I know the challenge that they might have to go through. But it is much better than it was before. I don’t feel it as strongly in the mill as I felt it back then.

There’s an opening at the mill right now, and we’re open-minded about diversity and women. It’s not a factor. It’s about the interview and that’s what drives the choice.

PPC: What advice do you have for young women considering the forestry industry?

MC: It’s mainly related to confidence. I know that women are never thinking that they’re too good for the position and they need some pushing. That’s something I’m trying to do with the young ones – to say hey, you’re able to do it. Don’t wait till you’re perfect, we’re never gonna be perfect. You just jump in. Come and work for Dryden!

PPC: How have you seen the industry change?

MC: The leadership mode has changed from traditional to collaborative. We’re trying to change from reactive to proactive, from directive to coaching and support, and improving the equipment. When it’s broken, now it’s more of a condition-based reliability maintenance.

And caring. Before, with safety, we would assess the numbers but now the thinking process behind it is more safety-driven. Whenever you design equipment or you are maintaining equipment, it’s not the same.

When I grew up through the organization, it was always a challenge because I was a woman. And now, I want to say that it’s not part of the challenge.

I think that people need to know that working for the pulp and paper industry is not necessarily the perception that they probably have. It’s probably not like Google or companies that are way out there with the innovation, but the world needs to know that it’s not something that’s going to shut down. It’s something that’s growing, and we need all of the confident candidates so we will be able get the potential out of the industry.

This interview has been condensed and edited for clarity.

Related
Change from the inside: Q&A with Pascale Lagacé, VP, environment, energy and innovation at Resolute
Up for a challenge: Q&A with Cynthia Desjardins, regional general manager at Cascades Containerboard Packaging
Implementing ideas: Q&A with Irene Preto, operations specialist at Mercer Celgar
Editorial: #EachforEqual means opportunities for all in the forestry sector
Tags