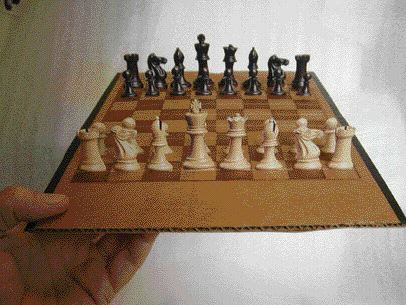 Cuts into the fluting of a single layer of corrugated board are sufficient to hold the flat chess pieces and allowing them to be moved from square to square.

CLOSUREWEYERHAEUSER CLOSES CANADIAN LUMBER MILLFEDERAL WAY, WA — Weyerhaeuser is shutting down its lumber mill in Grande Cache, AB, which the company said is due to high costs and shortage of timber….

FEDERAL WAY, WA — Weyerhaeuser is shutting down its lumber mill in Grande Cache, AB, which the company said is due to high costs and shortage of timber.

The closure will affect 156 employees. Company officials deemed the mill non-competitive. It produced about 130 million board feet of lumber annually.

TEMISCAMING, QC — Tembec completed the acquisition of the two Nexfor sawmills in La Sarre and Senneterre, QC, for $49.2 million plus working capital of $C15 million.

The acquired sawmills have a softwood allocation of approximately 1.1 million cubic metres per year, produce 260 million board feet of lumber annually and employ close to 450 people.

The acquisition will boost Tembec’s annual lumber capacity to over 1.76 billion board feet.

MONTREAL, QC — Norampac Inc. will invest $5.4 million to buy and install a new wood-residue boiler in its cardboard mill in Cabano, QC.

The new boiler will have the capacity to produce 100,000 pounds of steam per hour, drawing its energy from wood residues. This will reduce the current petroleum product consumption.

The Cabano mill, built in 1974 and ISO 9001 certified, employs approximately 140 people and produces corrugating medium for the North American market.

The award was presented to the three partners for applying Multivariate Statistics (MVS) methods to extract valuable information from manufacturing processes data flows. The Natural Sciences and Engineering Research Council and the Conference Board of Canada sponsor these annual awards.

MONTREAL, QC — The Montreal Gazette reported that effluent from the Irving pulp mill in Saint John, NB, was toxic enough to kill rainbow trout in 239 tests over a five-year period, yet the company was only charged once.

The newspaper also said Environment Canada mentioned that a dozen pulp and paper mills in Eastern and Central Canada have repeatedly violated federal environmental laws without being charged.

CHICAGO, IL — Smurfit-Stone Container Corp. will reduce costs in its containerboard mill, boxboard mill, and packaging operations, resulting in a workforce reduction of about 1,400 employees over the next 18 months.

Among its actions, the company plans to permanently close its Thunder Bay, ON, corrugating medium mill and temporarily idle one of two paper machines at its Jacksonville, FL, containerboard mill.

The company will also permanently close one of two paper machines at its Philadelphia, PA, coated recycled boxboard mill; and continue to reduce the cost and asset base of its corrugated container and consumer packaging operations over the next 18 months, including the potential consolidation of some facilities.

The company also announced a third quarter charge for a litigation reserve.

THUNDER BAY, ON — Due to economic challenges, Bowater’s PM3 in Thunder Bay, ON, is still down indefinitely, said Sue Prodaniuk, communications coordinator for Bowater.

Production ceased on June 28 for nine days. All the other paper machines, with the exception of PM3, were restarted on time.

VANCOUVER, BC — Canadian papermaker NorskeCanada announced its plans to acquire the BC operations of Newstech Recycling from the privately-owned Belkorp Group for an aggregate purchase price of $58 million, subject to certain closing adjustments.

The Terrace Standard reported that bailiffs seized trucks and other equipment at other New Skeena mills on the orders of the towns of Prince Rupert, Port Edward and New Hazelton.

Older unpaid taxes — $576,000 for Terrace and nearly $11 million due to Prince Rupert — are to be paid out over eight years starting next spring.

CASCADES IS ONE OF CANADA’S TOP EMPLOYERS

KINGSEY FALLS, QC — Cascades Inc. is one of the top 100 employers in Canada for 2004, according to a study done by Mediacorp Canada Inc. in collaboration with Maclean’s magazine.

The annual contest is intended to highlight employers that distinguish themselves by their ability to attract and retain quality employees within their company. In order to come up with such a list, the authors of the research based their findings on seven criteria, including quality of the work environment and social life, communication within the company, performance management as well as the value attributed to training. Particular attention was also given to the employer’s commitment to the community.

Out of the 51,000 employer files that were taken into account, only 6,000 of them, including Cascades, were asked to submit their names for this top 100 contest.

I read with considerable interest the article on Harvesting Technological Progress in the October issue of Pulp and Paper Canada. I agree completely with Joe Wright’s point that research and innovation are essential for long- term survival, and I note with regret that Canada still lags far behind its competitors in R&D investment.

I take strong exception, however, to the remarks of Waynne Despres, who “doubts that the old in-house research centres really provided much direct benefit to their corporate sponsors. The centres tended to be independent and bureaucratic entities often pursuing their own objectives, and without much concern for the real needs of their clients, which were the manufacturing divisions and mill sites”.

This was certainly not my experience at CIP Research (later Canadian Pacific Forest Products Research). The research group worked very hard to identify the company’s needs for technology and to find practical solutions. For research to be truly successful, however, the R&D group must be integrated into company planning for technology, marketing and corporate development, and management must be prepared to act on the results obtained. Effective technology transfer also depends on a strong mill technical and engineering staff, so that they have time to plan and implement new technology rather than just fighting fires. Despite serious weaknesses in some of these areas, however, CIP Research still paid for itself many times over through capital and operating savings and the development of new and improved products.

A number of studies over the past 20 years (among them the Science Council of Canada report in 1987) have emphasized the importance of in-house R&D in addressing problems specific to a company and in diversifying its product line. In fact, new products must be developed in-house if the company is to have any competitive advantage. In addition, in-house research groups can develop new or improved processes, evaluate and adapt external technology to meet the company’s particular needs, provide troubleshooting expertise, carry out liaison with other research centers, and influence the research carried out b
y university, government and co-operative laboratories. All of these functions were performed by CIP Research.

The alternative proposed by Mr. Despres involves two small groups of experts responsible for manufacturing technology and (external) R&D management. This type of structure may help to improve the communication and coordination of technical planning in a company. As pointed out by Geoff Hughson, however, in a letter to this journal in 1991, “the concept of a core group of technical experts keeping a company technically up to scratch has been discussed during every down-turn for at least 40 years, but remains without long-term merit for several reasons: (a) an expert without an innovative group behind him soon has nothing original to exchange with the technical world, so he becomes merely a well-known parasite, and (b) there is no breeding ground for replacement experts”. In an interview later that year, Jasper Mardon seconded this view.

During the past 20 years, there has been a considerable increase in pulp and paper research carried out by university laboratories and by suppliers. Although these groups can not take the place of in-house R&D, their contribution is welcome, since the more expertise that can be brought to bear on the industry’s problems the better. But it should be noted that much of the supplier research, particularly in the equipment field, is done offshore, and adds nothing to the expertise of Canadian companies.

Faced with its present problems and competitive pressures, the Canadian pulp and paper industry needs a strong contribution from all sectors of the technical community, and particularly the one which is key to innovation and product development — the in-house research group.

Pulp & Paper Canada welcomes Letters to the Editor at info@pulpandpapercanada.com

A new use for corrugated board that is said to change the way we play chess and other board games was discovered.

New York-based inventor Daniel Young, 62, discovered that cuts made into the fluting of corrugated board have an extraordinary capacity to hold and release inserted flat objects.

“Flat, die-cut pieces can now be held on a corrugated board in an upright position, producing a three-dimensional effect in a cost-effective way,” he said. This is particularly helpful in game boards, play boards and displays.

He demonstrated the holding power of a corrugated chessboard prototype by holding it upside down and shaking it without a single piece moving from its place.

A patent is pending on the method and devices made with it. Young plans to license manufacturers to use the method.