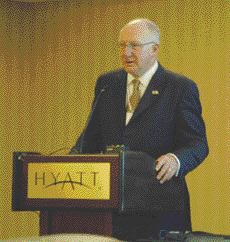 VANCOUVER, BC — A CEP initiative kicked off a drive to raise money for the Port Alice, BC food bank. The pulp mill located in northern Vancouver Island has been under bankruptcy protection for the second time in three years, leaving 300 people without jobs, and taking a drastic toll on the area’s economy. The Communications, Energy and Paperworker’s Union donated $5000 to start the drive, and is rallying the community to follow suit. “We will be encouraging all our locals in western Canada and our friends in the labour movement in BC to ensure that families don’t go hungry,” declared Dave Coles, CEP vice president.

GREENWICH, CT — The formation of White Birch Paper Company has sealed the deal that now brings three newsprint mills under the same ownership. White Birch now owns the Bear Island mill in Ashland, VA., the Soucy mill in Rivire-du-Loup, QC and the Stadacona mill in QC.

NEW YORK, NY — Tembec and ForestEthics are working together to try and save Canada’s Boreal, the country’s largest remaining wilderness. The two organizations recently reaffirmed their commitment to the Forest Stewardship Council Certification. Specifically, Tembec has confirmed its intent to seek FSC certification for forests under its care by the end of the year.

WASHINGTON, WA — A decision to disallow questions at its annual shareholder’s meeting has Weyerhaeuser under heavy fire. The company also reportedly refused to announce preliminary vote tallies to shareholders in attendance at the meeting. According to Teamster General Fund, shareholders also begrudge the company’s failure to expense stock options. “This is the third year that shareholders have supported this important reform at Weyerhaeuser,” said Thomas Keegel, International Brotherhood of Teamsters general secretary-treasurer and trustee. “We hope that the board will respect the will of the shareholders and finally adopt this proposal as policy.”

BRUSSELS, BELGIUM — As of May 1st, Sappi increased the prices of its flexible packaging papers, label papers and release liner papers by b80/tonne for all European and overseas markets. Increased energy, transportation and oil prices were credited with the decision.

RESULTS ARE IN: ABC TO SHUT DOWN MACHINE

ST-JOHN’S, NF — After much deliberation, Abitibi-Consolidated is shutting down one of its two papermaking machines at Grand Falls-Windsor. The company has been in the process of conducting a cost-cutting review to determine which of its operations are viable. Abitibi has said it will start consolidating its operations and cutting jobs in the province, a strategy that will pave the way for the shutting down of its 60,000 tonne PM7.

The move won’t come without a cost, however. The provincial government responded to the announcement with retaliatory force, indicating that if the company pushes ahead with the scheduled shutdown, it will lose the timber licenses associated with that operation.

The announcement came on the heels of the company’s Q1 posting, which boasted a $51 million loss. To push down costs even further, Abitibi is gearing up to sell its 150,000 tonne uncoated groundwood paper mill in Thunder Bay, ON.

The future of the Stephenville mill is also uncertain, and is largely dependent on the outcome of talks with the provincial government concerning energy sources. A final decision is expected in July. Meanwhile, the company hopes to secure lower energy costs with the Ontario government for its mill in Kenora, ON, whose future is also looking uncertain. A decision regarding the mill’s status is expected to be made public this month.

FARMINGTON, NH — Voith Paper is closing its paper industry service centre in Farmington, NH. As soon as all scheduled projects have been completed, the centre will officially close its doors. Although the decision is what the company refers to as the restructuring and consolidation of its North American service business, Stanley Brandon, senior vice president of Voith Paper Service credits the decline in industry production with the impending closure. “The North American paper industry had idled more than 10% of its production capacity over the last five years,” he pointed out, saying “there is just too much under-utilized capacity in North America for businesses specializing in paper machinery and equipment servicing.”

MONTREAL, QC — Norm Thompson Outfitters is bringing Domtar a lot of business. The catalog publisher has switched the offset paper for its Sahalie catalog and all its corporate order forms to products from the Domtar EarthChoice line of papers. Domtar first launched the line of coated and uncoated socially and environmentally responsible papers in April 2005. Norm Thompson’s Sahalie catalog is among the first in North America to be printed on paper made with fibre from forests certified to Forest Stewardship Council standards.

TEMISCAMING, QC — Tembec has announced plans to restructure its Eastern Canadian operations, which will include the closure of four of its manufacturing units. Citing a strong Canadian dollar and competitiveness issues, the company confirmed its hands are tied and the closures remain the only viable option. “After making considerable efforts to stem the significant losses of these mills and find appropriate solutions to the challenges that they are facing, the company came to the conclusion that it had no choice but to shut down these operations,” explained president and CEO Frank Dottori.

The company’s Saint-Raymond mill will close its doors on May 28th, at which point 165 jobs will be lost. The shut down of the Tembec Davidson sawmill in Mansfield-et-Portneuf will be more gradual, however, a total of 209 people will be put out of work once operations cease completely. The sawing operations at the TKL sawmill in Temiscaming, QC will close on July 11th and 29 people will lose their employment as a result. Marks Lumber, a remanufacturing facility in Brantford, ON closed on May 17th, and 56 people are now out of a job as a result.

MONTREAL, QC — Tembec isn’t alone in its decision to close operations. Norampac has followed suit with a decision to cease operations at its Montreal -based corrugated products plant during the second quarter of 2006. The decision is part of a reorganization plan the company has implemented, which includes an investment plan totaling close to $30 million.

Roughly 215 people will be put out of work as a result of the closure, however, the company is developing a relocation program to make sure that as many employees as possible will be able to secure a position within one of the company’s divisions. The plant’s limited potential for expansion was cited as the primary reason for the decision.

Honing your scissors, paper, rock skills may not be such a bad idea. It wasn’t for Christie’s auction house, whose deftness at the game won it the right to sell off a $20 million art collection, leaving rival Sotheby’s nursing its wounded, scissors-sliced paper.

ABC online recently reported Japanese art collector Tashi Hashiyama’s befuddlement as to which of the esteemed establishments should house his collection, which comprised works by the celebrated Picasso, Van Gogh and Cezanne. What better way to decide than to resort to an old-fashioned game of scissors, paper rock? Apparently none, confirmed Christie’s executive Nicholas Maclean, who noted that decisions in Japan are not uncommonly reached through the playing of this game. In lieu of using their hands, representatives from each of the adversaries marked their selection on a piece of paper. Christie, who elected to go with scissors, won the standoff. Sotheby chose paper.

The paintings sold for $17.8 million. Although a final number for the commission hasn’t been released, the auction house will pocket more than $1 million for the most expensive painting alone.Source: ABC Online

THUNDER BAY, ON — A recent posting of a $51 million first quarter loss has Abitibi Consolidated taking stock of a few things. In addition to a decision to shut down a paper machine at its Grand Falls Windsor mill, and to review the viability of several others of its operations, now the future of the Fort William facility in Thunder Bay is being called into question. The mill is currently on the market and an additional 200,000 hectares of timberlands the company owns just north of Thunder Bay are up for sale, a move Abitibi claims is not related to the sale of the Fort William mill. The Chronicle Journal, a Thunder Bay based publication, has reported the company as having confirmed the mill as being high cost, and therefore a facility best left in the hands of a competitor with different plans and initiatives.

Although Canada’s pulp and paper industry often looks to that of Finland in search of a paragon for how to maximize its resources, similarities between the two countries abound. Both have had exponential oil and energy costs to contend with, but discrepancies in the results of such efforts are glaring. Finpro’s Advanced Tech Sympo 2005 held in April, in Montreal, addressed some of these issues, pointing out, once again, that restructuring and downsizing projects in Canada’s pulp and paper mills are imperative to move the industry forward to properly position it as a profitable and competitive player. As Honorary Consul for Finland in Montreal Patrick Kenniff (above) attested to, “Canada has a great deal to learn from the Finnish experience.” Guest speaker, Jan Lauritzen, Manager, TMP, Clay & Kraft at Stora Enso’s Port Hawkesbury mill, also acknowledged the stark contrast between the two industries in their dealings with government, highlighting that, “in Finland, there is room to negotiate with officials, unlike in Canada.” The Finnish are also managing to attract young people to an industry considered to have good career potential in that country, an obstacle growing ever larger in Canada.