The MPR woodlands team, along with First Nations and Métis Settlements in its Forest Management Area, have begun Traditional Land Use projects aimed at building trust and communication 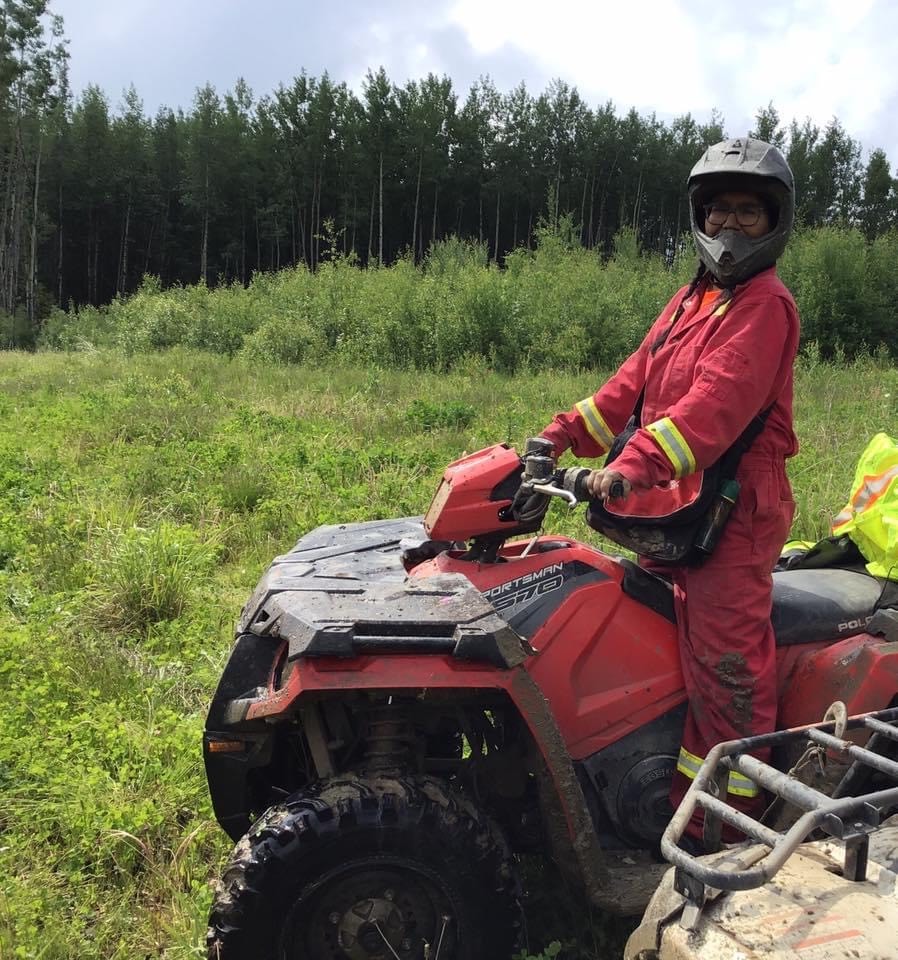 A unique partnership between a pulp mill and several Indigenous communities in Alberta is aiming to establish a more inclusive consultation process for forest management.

In cooperation with First Nations and Métis Settlements in its Forest Management Areas (FMAs), the Mercer Peace River (MPR) woodlands team has begun Traditional Land Use projects (TLUs) aimed at building and maintaining ongoing communication and trust between all parties.

One of the ways they are developing knowledge-sharing is through a web-based tool called the Spatial Viewer, which houses planning data from MPR, as well as historical and cultural data, shared by Indigenous communities through a data sharing agreement with Mercer.

As a data entry specialist for Horse Lake First Nation in Hythe, Alta., Tina Horseman has been responsible for adding data points reflecting the nation’s traditional and cultural values into the system since the project started in 2019.

Horseman has transcribed over 1,100 points, lines and polygons so far, and says there is long term value in the project that extends beyond the partnership with Mercer Peace River. “The data will be there for future generations so they can know what’s on the land,” she says.

The effort is personally meaningful to Horseman, who works closely with the elders in her community to uphold Horse Lake First Nation’s history. In 2003, her grandfather catalogued many of the region’s points of cultural significance, which formed the basis of the data set she’s been working on.

“I remember when my grandfather was out showing my uncle and my auntie where all these spots were before he passed away,” she says. “I wasn’t able to go on any of the site visits, so I thought it was really important that these places be put into the Spatial Viewer.”

Mercer Peace River is located about 500 kilometres north of Edmonton and manages about 2.7 million hectares of Alberta forest across two 20-year renewable government FMAs and three hardwood timber allocations, which provide the fibre needed for the mill’s softwood and hardwood kraft pulps. The company’s forest management planning process lasts for about two years and involves collaboration with Indigenous communities and the public.

How that collaboration occurs has evolved significantly with the introduction of the TLUs. Communities and their consultation staff manage a large number of project files from many different proponents.

In some cases, as Gilmen Cardinal, consultation manager with Peerless Trout First Nation in Peerless Lake, Alta. explains, there may be 50 trappers to consult with on a given request — and historical or contemporary TLU data is not always readily available for the consultation process.

The TLU and Spatial Viewer provide the additional time and ability to have ongoing information sharing to ensure that consultation and engagement are dynamic, accessible and meaningful.

The TLUs, which are jointly funded by the Forest Resource Improvement Association of Alberta (FRIAA) and Mercer Peace River, were developed in direct response to feedback from communities about opportunities to improve consultation, engagement and sustainable forest management, says Jenna Strachan, Indigenous relations superintendent at MPR.

Now, when the regulatory consultation process formally begins with the First Nations and Métis Settlements that are located within MPR’s FMAs, the ongoing knowledge sharing means “we can enter into a really well-informed dialogue about Mercer’s plans and the data we have, and the community’s values and interests on the land base,” Strachan says.

At the heart of the TLUs is the community-led collection of knowledge and data. Under a traditional land use agreement and with funding from FRIAA, Indigenous communities are able to employ their members to investigate and document important parts of the landscape within the FMAs.

Many communities are adding this collected data to the secure Spatial Viewer platform. Among the historical and cultural features that can be entered into the system and displayed on maps are burial and birthing sites, cultural campsites, cabins, medicinal plants, streams, hunting and trapping areas, and trails.

The Spatial Viewer has provided a permanent place to weave together information from many disparate sources, including maps, binders, spreadsheets, flash drives and oral stories that have been passed down over generations.

“It’s a lot easier on the consultation side when we’re responding back to requests,” says Kieran Broderick, RPF, an advisor for the Industry Relations Corporation (IRC) at Horse Lake First Nation who works to uphold Aboriginal and inherent Treaty rights. “We now have that information on the Spatial Viewer right at our fingertips.”

Silvacom FMS, which specializes in cloud-based forest management, developed the Spatial Viewer as a web-based Geographic Information System (GIS). Mercer, in partnership with the Indigenous community participants, worked together to customize the tool to work more effectively for all users.

The tool organizes spatial data layers from all parties in a way that is easy for technical and non-technical users to explore. This is an important feature, since the Spatial Viewer is widely used within both the MPR organization and the communities. As a secure cloud platform, the Spatial Viewer allows everyone to connect through one system. Data from Spatial Viewer is readily translated into maps or housed in a document management system.

Users can access topography, wet areas mapping, provincial datasets and high-resolution images — including a “leaf-on, leaf-off” feature that allows for leaves to be digitally removed from images in order to observe the ground and waterways during full-foliage periods.

“It’s a lot easier on the consultation side when we’re responding back to requests,” says Broderick.

Because the Spatial Viewer is a two-way information system, MPR is also able to add its planning data and high-resolution imagery. In addition to this information, “we can also share the history of areas that we have operated in the past, and where we plan to harvest in the future,” says Strachan.

“We also share other important landscape data including other industry dispositions so that the communities can see more fully the different activities on the land base to help us develop more mutually favourable plans or mitigation.” 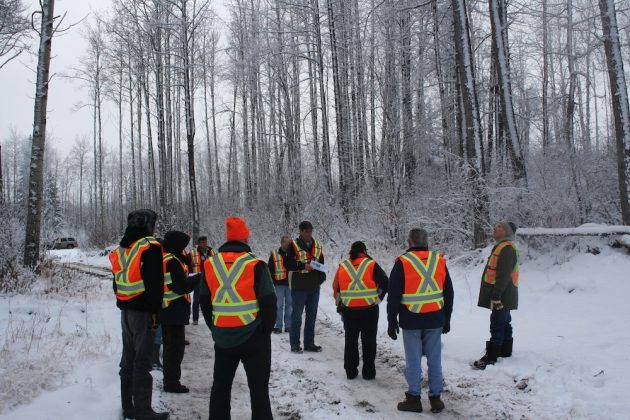 The TLUs, and the use of the Spatial Viewer, have opened up the conversation when it comes to Mercer’s forest management practices. Mitigation may mean things like additional buffers around moose lick complexes, leaving large unharvested areas for caribou, or reducing site preparation measures to ensure berry or medicinal plant regeneration.

Mutually favourable plans may include harvesting in a region to bring moose back to a habitat, or reduce wildfire risk. The participants can also use modelling to predict where certain species of interest to Indigenous community members may be located.

“It’s not necessarily about ‘do or don’t operate,’ it’s more about ‘how,'” says Strachan. “And, if we operate in an area with key values identified, what do we need to consider to protect and maintain the values?”

If a proposed plan needs to be modified to accommodate certain cultural features, the relationship and the landscape data is now there to discuss possible buffer zones or no-go areas.

“Mercer was willing to listen to PTFN and work with us when it comes to cultural and traditional values and the things we’d want to protect,” says Cardinal. “They’ve set the standards high for all logging companies to follow this business plan and work with the Nations. It would go a long way, even if it takes an extra year or so to plan.”

“Mercer was willing to listen to PTFN and work with us when it comes to cultural and traditional values and the things we’d want to protect,” says Cardinal.

Working together on the tool has helped to develop trust. At Cardinal’s suggestion, MPR added a key feature to the Spatial Viewer: the ability for communities to control permissions on their data, meaning MPR can’t necessarily see every point on the system if they haven’t been granted access. This helps the communities use the Spatial Viewer for their own data-tracking purposes.

As part of the partnership, MPR offers the tool at no cost, and provides ongoing training and support. While some communities are moving fully to the Spatial Viewer as a data management system, others are using it in addition to their existing systems.

“We didn’t want accessibility to this system and this type of engagement to be limited by the communities having to pick and choose which system to use,” says Strachan. “We didn’t want to add any additional financial burden or to reduce their in-house capacity. We wanted to have it free of charge so they can engage more meaningfully.”

A future beyond forestry 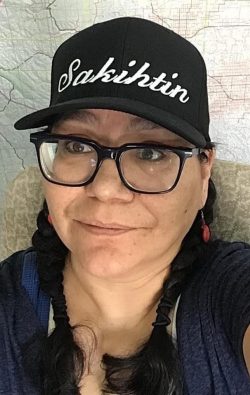 Since the design of the TLUs are community-led, improvements are always ongoing. MPR is exploring new capabilities for the Spatial Viewer such as further refining categories of information, adding audio and video files and linking to government application portals.

“Some communities are using the traditional land use project to identify and collect the Indigenous place names for their traditional territory and sharing that with us,” says Strachan.

“And we’re looking at ways to include these Indigenous place names into our own shared mapping system, which we think will be a benefit in consultation when we can speak to elders and community members.”

The Spatial Viewer has been a valuable asset in completing other work for Peerless Trout First Nation. “I use it for everything,” says Cardinal. “I get zipped shapefiles from industry — oil and gas and other logging, access roads, pad sites.”

Horse Lake First Nation is also adding points beyond the scope of its involvement with MPR, including for the expansions of the Trans Mountain pipeline and the Pembina Peace Pipeline.

“Going forward, the more information that we are able to add into the system, I believe the more areas will get protected for the exercise of inherent Treaty and Aboriginal rights,” says Broderick.

Before Horse Lake First Nation had the tool, industrial companies would often send out workers to conduct site evaluations, but those workers didn’t necessarily have all of the information about a given place, says Horseman.

As a result, “a lot of projects got approved that maybe shouldn’t have,” she says. “If they didn’t know, what can you do? But now they do.”