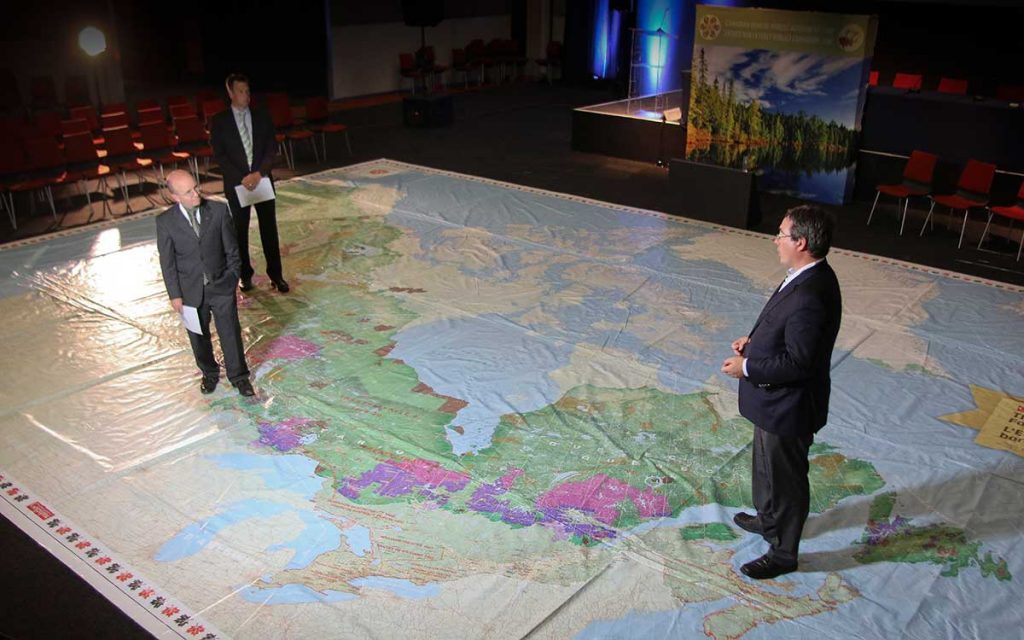 This giant map was a highlight of the presentation to the Congress about the Canadian Boreal Forest Agreement.

The world’s forests must be recognized as “more than trees,” the XIV World Forestry Congress meeting in Durban, South Africa, concluded. Instead, forests hold vast potential to play a decisive role in ending hunger, improving livelihoods and combating climate change.

The largest gathering on forests this decade set out its vision of how forests and forestry should look in 2050, adopting the Durban Declaration after a week of debate.

The vision calls for the forests of the future to be “fundamental” for food security and improved livelihoods. Forests and trees must also be integrated with other land uses such as agriculture in order to address the causes of deforestation and conflict over land, according to the declaration.

Finally, sustainably managed forests must be an “essential solution” to combating climate change, optimizing their ability to absorb and store carbon while also providing other environmental services.

“The declaration reflects the extremely rich and diverse set of viewpoints and experiences of all participants in the Congress, who recommended ways to make the vision a reality,” said Tiina Vähänen, deputy director of FAO’s Forest Assessment, Management and Conservation Division.

The declaration outlines a series of actions needed to realize the vision, including further investment in forest education, communication, research and the creation of jobs, especially for young people.

It also stresses the need for new partnerships among the forest, agriculture, finance, energy, water and other sectors, and strong engagement with indigenous peoples and local communities.

While SDG 15 addresses the need to sustainably manage forests, trees and forests are also a key to achieving several of the other 16 goals, including those related to ending poverty, achieving food security, promoting sustainable agriculture and ensuring sustainable energy for all, the message says.

The Congress also saw the launch of an international five-year forests and water action plan to recognize the role of trees and forests in maintaining the water cycle, and to ensure appropriate management of one of the world’s largest sources of freshwater.

Almost 4,000 delegates from 142 countries attended the congress, which is held every six years.

Panel members strolled across the boreal forest map to explain the work of the CBFA in various parts of Canada as they delivered their presentation.