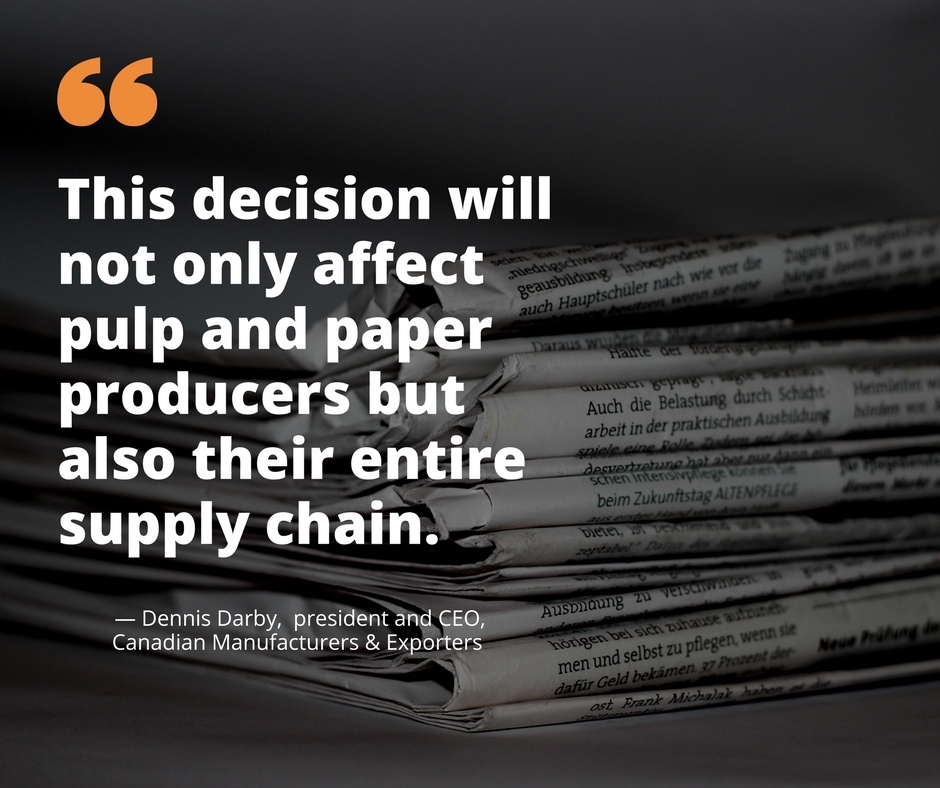 Jan. 25, 2018 – On January 10, the Canadian government made public a World Trade Organization (WTO) complaint over the United States’ trade remedy measures, arguing its use of anti-dumping and anti-subsidy duties violates global trade rules. The 32-page complaint, filed December 20, cites nearly 200 examples of alleged U.S. wrongdoing, many of which are unrelated to Canada and are against other trading partners such as China, Japan, Germany and the European Union.

Minister of Foreign Affairs Chrystia Freeland said the WTO action is part of a “broader litigation” to defend forestry jobs across the country.

The complaint is Canada’s most recent attempt to counter import duties imposed by the U.S., particularly on Canadian softwood lumber products. Its publication came just hours after the U.S. Department of Commerce announced preliminary countervailing duties of 0.65 to 9.93 per cent on Canadian exports of uncoated groundwood paper or newsprint.

The disputes are occurring in the midst of difficult North American Free Trade Agreement (NAFTA) renegotiations between Canada and the U.S.

Canada is the largest exporter of newsprint in the world. According to the U.S. Department of Commerce, Canada exported more than $2.4 billion worth of newsprint to the United States in 2016.

“These rates tabled by the U.S. on uncoated groundwood paper represent the third action that stands to hurt hard-working men and women in our mill communities across Canada,” he said.

An overall tariff of 6.53 per cent has been levied on about 25 Canadian plants. Kruger faces a preliminary duty of 9.93 per cent, while the duty against Catalyst Paper is 6.09 per cent, 4.42 per cent for Resolute, and 0.65 per cent for White Birch.

Many members of the Canadian forest products sector argue the proposed U.S. duties on newsprint will have a severe impact beyond the national level.

“This decision will not only affect pulp and paper producers but also their entire supply chain,” said Dennis Darby, Canadian Manufacturers & Exporters president and CEO. “Additionally, the duties will drive the prices of newsprint up in the U.S., hurting American consumers.”

“There are 600,000 workers in the newspaper publishing sector as well as the commercial printing sector who are at risk,” said Resolute Forest Products spokesperson Seth Kursman, as reported by The Canadian Press. “And we know as a manufacturer of this product that if demand continues to go down over time, this has an impact on our ability to operate facilities.”

Canada will host the next round of NAFTA talks on January 23 to 28; until then, the industry must wait to see how the conversation plays out.

As Resolute president and CEO Richard Garneau puts it, “Canada is rightly emphasizing the United States is a continental partner, and free trade between the two nations is in the best interests of both countries and their shared economic prosperity.”

This column was originally published in the Winter 2018 issue of Pulp & Paper Canada.