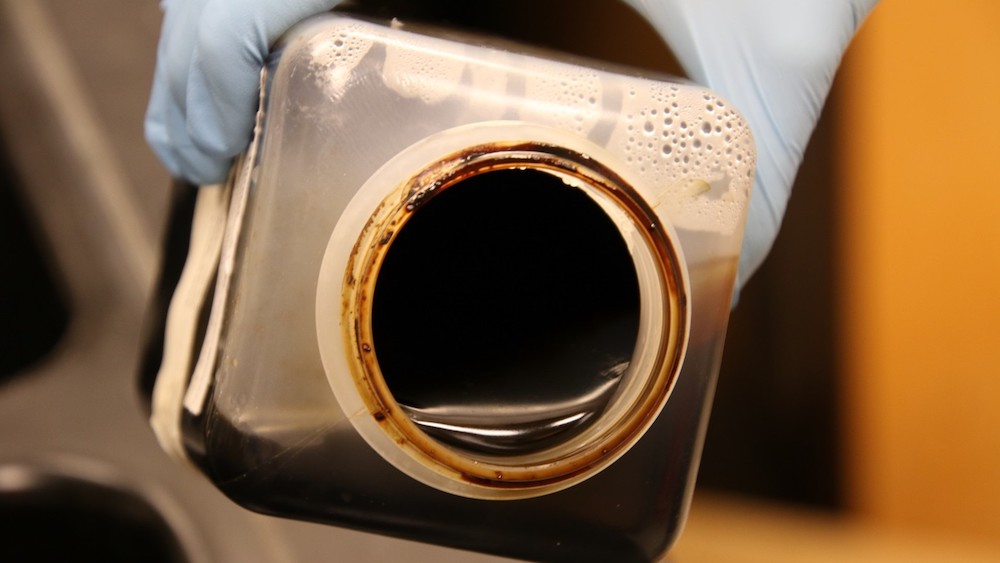 Black liquor used to produce bioenergy and lignin has much room for improvement, however proper analysis of black liquor has always had its challenges.

FPInnovations is developing a method to use NIR spectroscopy in analyzing black liquor properties to identify new optimization opportunities.

What is black liquor used for?

Black liquor byproduct is separated from the pulp and sent to the evaporation plant where it is concentrated. In increasing black liquor concentration, other compounds can be extracted and offered as commercially viable products, such as lignin.

So, where’s the problem?

Well, the properties of black liquor (such as inorganic content level, heating value and lignin concentration) affect its evaporation and combustion. These properties also play a part during the lignin extraction process.

With respect to evaporation, previous research clearly shows that the composition of black liquor impacts the tendency of fouling in the evaporators. The ratio of the different inorganic and organic compounds (e.g. cations, carbonate, sulphate, lignin, etc.) can predict the location and quantity of scale that will precipitate during the evaporation process.

When it comes to combustion, the thickness and viscosity of black liquor can lead to unsafe conditions in the recovery boiler due to reasons such as high material build-up on the heat transfer surfaces or at the bottom of the boiler.

Black liquor composition also plays a major role in the lignin extraction operation. The degree of black liquor oxidation is dependent on the amount of sulphide in the black liquor.

Why is black liquor not properly analyzed?

Most kraft pulp mills also lack the laboratory equipment, and measurements are often contracted to an outside lab such as FPInnovations.

These practices hinder the engineers’ and operators’ ability to optimize the evaporation and combustion of black liquor, resulting in high operating costs and unscheduled shutdowns that lead to production losses. The quality and quantity of the lignin extracted from black liquor are also affected.

Can NIR spectroscopy be used to analyze black liquor?

Near-infrared (NIR) spectroscopy has the potential for online measurement of black liquor properties. The NIR region of the electromagnetic spectrum contains information on water, organic bonds, and particle size.

NIR spectroscopy is commercially available for the analysis of green and white liquor streams in the causticizing plant, as well as for low-concentration black liquor streams in and around the digester. In fact, these NIR spectroscopy applications were developed at FPInnovations and are now installed and adopted at many pulp mills across the globe.

As solids concentration of the black liquor increases during evaporation, the liquor becomes very dark limiting the amount of light passing through.

Previous studies have tried to work around this limitation by using attenuated total reflection — which has no currently available commercial applications — or by drying and pelletizing the black liquor prior to analysis — which is not suitable for online monitoring.

What does FPInnovations propose?

Based on the results, the group will also be developing new operating strategies to improve recovery of energy and chemicals from black liquor as well as the extraction of lignin.

How will this be done?

The project will be carried out in three phases.

The second phase is the implementation of a trial NIR system at an operating mill, both to improve the accuracy of the prediction models, and to resolve potential issues surrounding the continuous operation of a NIR system under a typical mill environment.

Through this project, FPInnovations intends to maximize black liquor throughput during the recovery process and minimize unscheduled downtime — improvements that would increase the mill’s pulp production, therefore improving its competitiveness.

For more information, reach out to Wei Ren, senior researcher, at wei.ren@fpinnovations.ca, or Stéphan Larivière, industry sector leader, at stephan.lariviere@fpinnovations.ca.

This article appeared in the Winter 2021 issue of Pulp & Paper Canada.

Related
Transforming pulp: Can TMP act like kraft pulp for use in N95 masks?
BC projects employing pulp and paper residuals get $815K in funding
Q&A: Improving quality from paper machine to cloud
The m-factor: A tool for improving tissue strength uniformity
Tags